They are the new kids on the block in a Senate that is tipped to steal the show in both dynamics and theatrics in the 47th Parliament.

With a frisson of nervous excitement and an abundance of goodwill, the incoming class of new senators arrived in Canberra for a two-day crash course on their roles and responsibilities as they prepared to take their seats in the chamber next week. 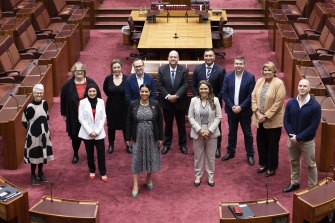 “I’m excited. I’m pumped. I’m ready to do some work in here,” he declared.

“There are lots of personalities. I actually met a couple of them just inside. Lovely people. I’m sure we’re going to get along. We’re going to do everything that we can to do the right thing by Australia.”

Queensland Senator Penny Allman-Payne, one of three new Greens joining the crossbench, said her three decades of experience as a primary school teacher stood her in good stead for getting up to speed on Senate processes.

“Lifelong learning is my shtick,” she said, quipping: “I’m hoping we don’t see any behaviour like our Year 9s”. 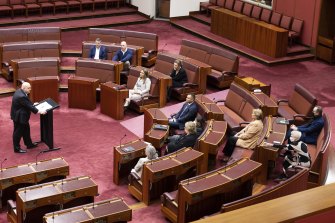 Rubgy union star turned ACT independent senator David Pocock was pleased with the location of his seat up the back of the chamber.

“It’s nice to meet all the new senators. To see your name on the desk makes it real,” he said.

The two-day bootcamp, affectionately called Senate school, is designed to give the new arrivals a swift education in the operation of the house of review, covering everything from the legislative process to the role of committees and senate estimates, as well as etiquette in the chamber.

Afghan-born refugee Fatima Payman, Labor’s newest senator for WA, will be the youngest member of the chamber and the third-youngest Australian senator in history. The 27-year-old Muslim-Australian will also be the first woman to wear a hijab in the Senate, although One Nation’s Pauline Hanson was the first to don Muslim headwear as a result of her bizarre anti-burqa stunt in 2017.

Welcoming the new class, Senate President Slade Brockman informed them they would join the ranks of just 642 Australians who had served as senators since federation and would be “the engine room” of the new parliament.

In a bid to set a better tone for the next three years than the last three, Brockman urged that civility need not be a casualty of ideological difference.