Is it just me? Or are you sick of this sporting summer, too? asks MARION McGILVARY

Good God will it never end? Bad enough to have had a year of pandemic house arrest, but to be suddenly freed into this world of televised sport seems like a torture too far. Every time I turn around it’s there, on every channel, even the news.

If it’s not a load of tattooed men kicking a ball, it’s a grunting person dressed in white skimpies, hitting one with a bat.

Then just when Wimbledon and Queens are laid to rest, and England have hung up their football boots; just when you think it’s safe to ask if you can finally leave the house and go and enjoy some of the Government-approved freedom, we’ve all been promised, it’s the ruddy Olympics. 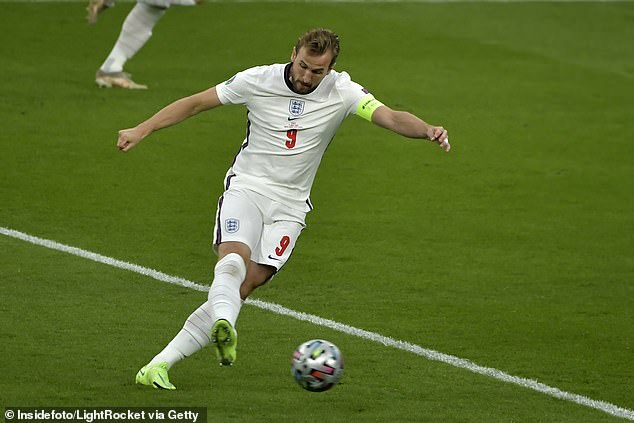 Marion McGilvary admits she can’t muster up any enthusiasm for another competition. Pictured: Harry Kane at Euro 2020 football match

Now it’s not just balls you have to contend with, it’s track and field, racing, rowing, diving . . . I mean, if you could competitively park cars, there would probably be a qualifying heat for that, too.

I’ve had it, right up to the final whistle, to the base line, to the end of the lane. I have a gold medal in boredom and a silver in its sister, tension.

I’ve sweated by the side of the football pitch on the boyfriend’s specially purchased 3,000-inch screen.

I have an ulcer from watching penalties. I winced with every double fault and fluffed drop shot on the tennis court, and what, now? Now, you want to me to watch gymnastics? And more football. And even more tennis?

Give me a service break. I can’t do it any more. I just can’t muster up any enthusiasm for another competition. I have reached saturation point.

I want my life back.