Rising music theatre star Jason Arrow has landed the role of a lifetime after he was cast in the title role of the Australian premiere of Hamilton.

Arrow, who graduated from the Western Australian Academy of Performing Arts in 2016 and has gone on to play supporting roles in Aladdin and Beautiful: The Carole King Musical, will now step up into the lead role as Alexander Hamilton in one of the world's most popular musicals. 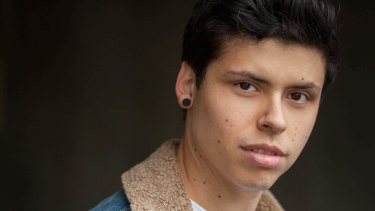 Jason Arrow has been cast as Alexander Hamilton in the Australian production of Hamilton.

Playing Hamilton's political rival Aaron Burr is Lyndon Watts, who was most recently seen as Bernardo in the Australian tour of West Side Story.

Ironically, Arrow originally auditioned for Burr while Watts auditioned for Hamilton. By the second round of auditions, the musical's creative team were considering them for the opposite roles. 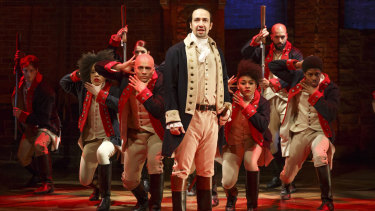 The original Broadway cast of Hamilton.Credit:AP

The remaining principal cast is made up of Matu Ngaropo as George Washington, Victory Ndukwe in the dual role of Lafayette and Thomas Jefferson and Shaka Cook as Hercules Mulligan and James Madison. Marty Alix will play Hamilton's son Phillip.

Of the two imported performers, one will have a role in the ensemble while the other will understudy the male principal roles.

Arrow said he felt emotional when he first saw the cast list with so many performers of colour.

"I didn't think that I would have an emotional response to it but I could feel myself welling up a little," he said. "It's not something you see that often and until you see it you don't realise how rare it is, then it really hits home. This is a moment to be celebrated, it's a turning point."

The show's creator Lin Manuel Miranda said he was excited by what the team had achieved after a casting process that has taken more than a year.

"I am incredibly excited by the cast we have assembled for the premiere of Hamilton in Australia," he said. "While theatres around the world have been forced to temporarily shut down due to the COVID-19 pandemic, we have taken this time to bring together a truly incredible ensemble to tell this story. Led by Jason Arrow as Alexander Hamilton, this cast has such incredible talent, warmth and power. I know they will thrill and move audiences in Sydney when it's safe to return."

The show tells the life story of Alexander Hamilton, who rose from poverty to become one of America's founding fathers. The musical uses hip-hop, rap, R&B and traditional music theatre to, in Miranda's words, tell "the story about America then told by America now". It won 11 Tony Awards, a Pulitzer Prize and multiple Olivier Awards for its London season.

With theatres in Broadway and London shuttered due to the coronavirus pandemic, it is highly likely the Australian production will open before other countries return.

The cast will assemble in late January to begin rehearsals ahead of the first performance on March 17. New tickets will be released on Friday with performances playing until September.

The most important news, analysis and insights delivered to your inbox at the start and end of each day. Sign up to The Sydney Morning Herald’s newsletter here, to The Age’s newsletter here and Brisbane Times‘ here.