Shutting it down. Jessie J told fans to “just stop” commenting on her body after being asked whether she’s pregnant.

“Stop commenting on people’s weight, anyone. Just stop,” the “Price Tag” singer, 34, wrote via her Instagram Story on Thursday, March 31. “Or telling someone they look pregnant for sure, or you look skinny, just anything, just stop. I see it so much on socials and I know it happens in real life.”

Jessie went on to say that while she has recently gained some weight, she feels “great” and isn’t worried about it. “I don’t care, as long as I feel good and I’m healthy,” she argued. 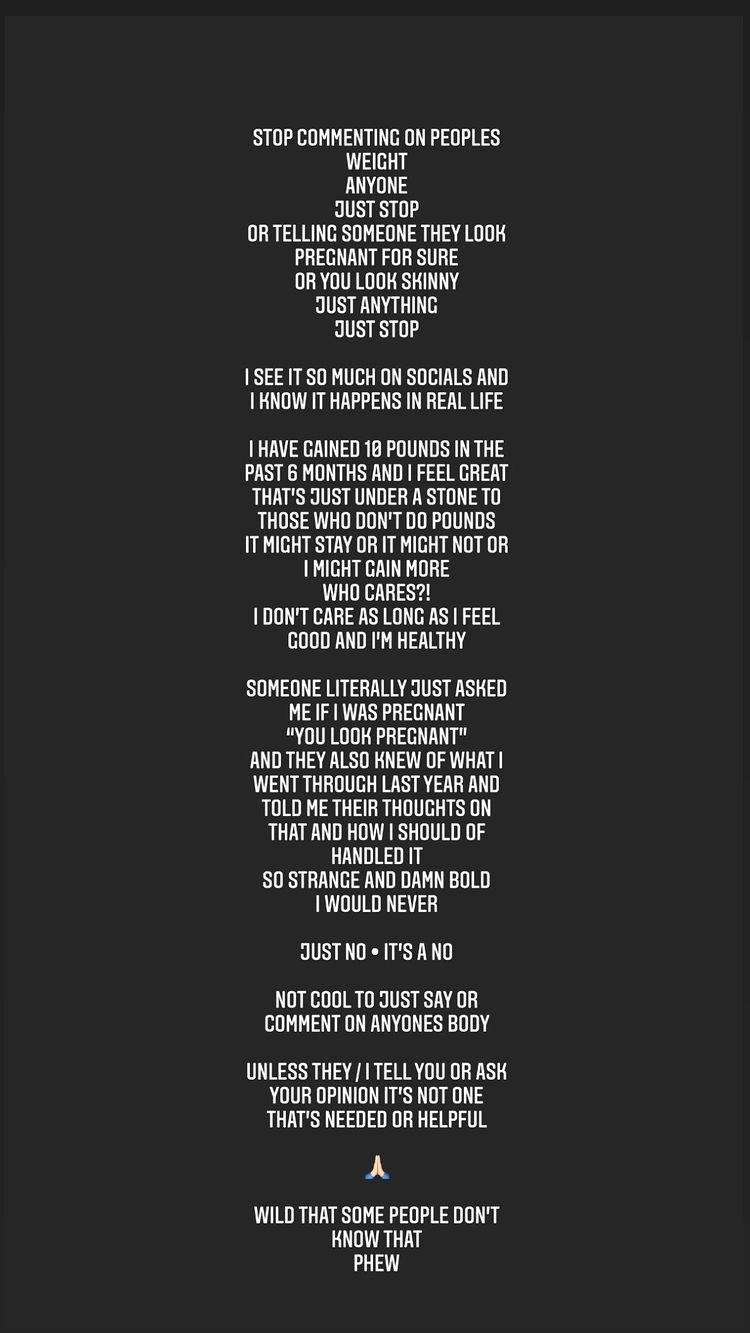 Though she isn’t bothered by any changes her body goes through, that hasn’t stopped others from offering her unsolicited advice. “Someone literally just asked me if I was pregnant,” the “Domino” performer claimed. “And they also knew of what I went through last year and told me their thoughts on that and how I should’ve handled it. So strange and so damn bold, I would never.”

Stars Who Struggled to Conceive Children Share Their Fertility Issues

In November 2021, Jessie revealed that she had suffered a miscarriage after years of attempting to start a family. “I want to be honest and true and not hide what I’m feeling. I deserve that. I want to be as myself as I can be in this moment. Not just for the audience but for myself and my little baby that did it’s best,” she wrote via Instagram at the time.

Jessie continued: “I decided to have a baby on my own. Because it’s all I’ve ever wanted and life is short. To get pregnant was a miracle in itself and an experience I will never forget and I know I will have again. I’m still in shock, the sadness is overwhelming. But I know I am strong, and I know I will be ok.”

The West End vet’s recent interaction prompted her to remind her social media followers that it’s “not cool” to “comment on someone else’s body.” She continued on Tuesday, “Unless they/I tell you [to] or ask your opinion, it’s not one that’s needed or helpful. Wild that some people don’t know that.”

Along with discussing her 2021 miscarriage, Jessie has previously been open about her struggles with infertility. “I was told four years ago that I can’t ever have children,” the Voice UK judge told the audience during a London concert in November 2018. “I wanted to write this song [‘Four Letter Word’] for myself in my moment of pain and sadness but also to give myself joy, to give other people something that they can listen to in the moment when it gets really hard. So if you’ve ever experienced anything with this or have seen somebody else go through it or have lost a child, then please know you’re not alone in your pain and I’m thinking of you when I sing this song.”

In June 2019, Jessie confessed that she wasn’t giving up her hope of becoming a mother one day. “I’ve always been someone that’s open and honest,” she said on the “Heart Breakfast” radio podcast at the time. “Four, four-and-a-half, five years ago, I was diagnosed with this disease, which is making it harder. I was told I can’t have children, but I don’t believe it. I believe in miracles. I haven’t given up.”