Former leader or co-leader of the British rock group the Beatles, author and graphic artist, solo recording artist, and collaborator with Yoko Ono on recordings and other art projects, John Lennon’s last letter has been auctioned at a price way higher than expected. A Beatles fan or presumably a memorabilia collector has spent nearly $64k to get his hands on the letter by the rock legend, which he typed just hours before his murder.

Lennon wrote the letter on December 8, 1980, and it was addressed to his accountant. The same day, he was shot and killed by Mark David Chapman outside his apartment. Continue reading to know more about the auction.

The letter, which went on auction two weeks back by the auction house, Gotta Have Rock and Roll, was expected to fetch between $30k to $50k. However, by the end of the 17-day online auction on October 22, the letter had got several bidders that pushed the price high up to $63,750, per the Teal Mango.

The buyer has chosen to remain anonymous, so their identity is unknown. The letter is the last recorded legal document that bears John Lennon’s autograph. The musician signed the letter and sent it to his accountant, Barry Nichols.

In the letter, Lennon listed the names of three proxies he chose to vote at the annual meeting for the Beatles corporation. The meeting was scheduled to be held in London nine days later.

In August, another letter written by Lennon in 1971 was posted for auction. It was addressed to Paul McCartney and possessed Lennon expressing his frustration over his former bandmates’ claims that he was not cooperating in settling the Beatles’ business dealings.

“We’d just sign the paper and hand it to the business people and let them sort it out. That’s all I want now, but John won’t do it. Everybody thinks I am the aggressor, but I’m not, you know. I just want out,” McCartney had said in an interview. 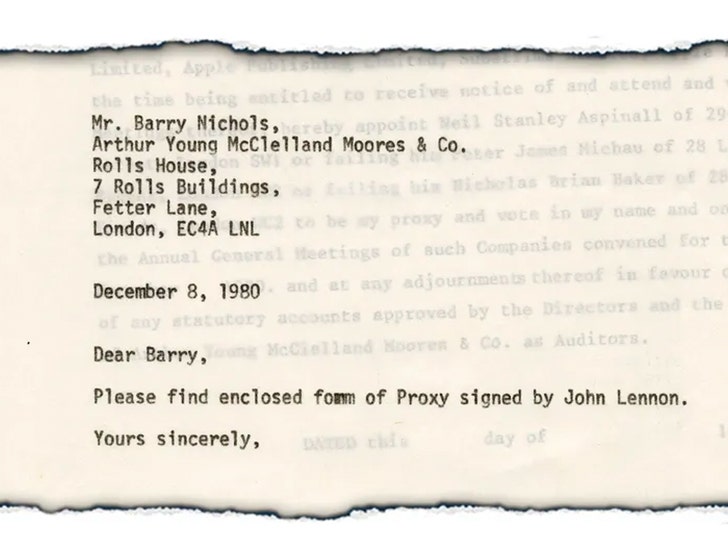 Four days later, Lennon had replied, “No hard feelings to you either. I know we basically want the same thing, and as I said on the phone and in this letter, whenever you want to meet, all you have to do is call.” The singer had defended his solo music career and his move to New York City and had also accused McCartney of hindering the negotiations.

As reported by the Teal Mango, On December 8, 1980, Lennon was fatally wounded after being shot by Mark David Chapman outside The Dakota, his home in New York City. Chapman claimed to be a Beatles fan who was infuriated over Lennon’s lavish lifestyle and his remark that the Beatles were ‘more popular than Jesus’.

Earlier in the evening, Lennon had signed a copy of his album Double Fantasy for Chapman outside his home and went for a recording session with his wife Yoko Ono. Later that night, the couple returned, and as they were entering their apartment, Chapman shot Lennon five times with a .38 special revolver.

The singer was rushed to Roosevelt Hospital in a police car, but was pronounced dead on arrival. Chapman later confessed to his crime and was sentenced to life imprisonment. 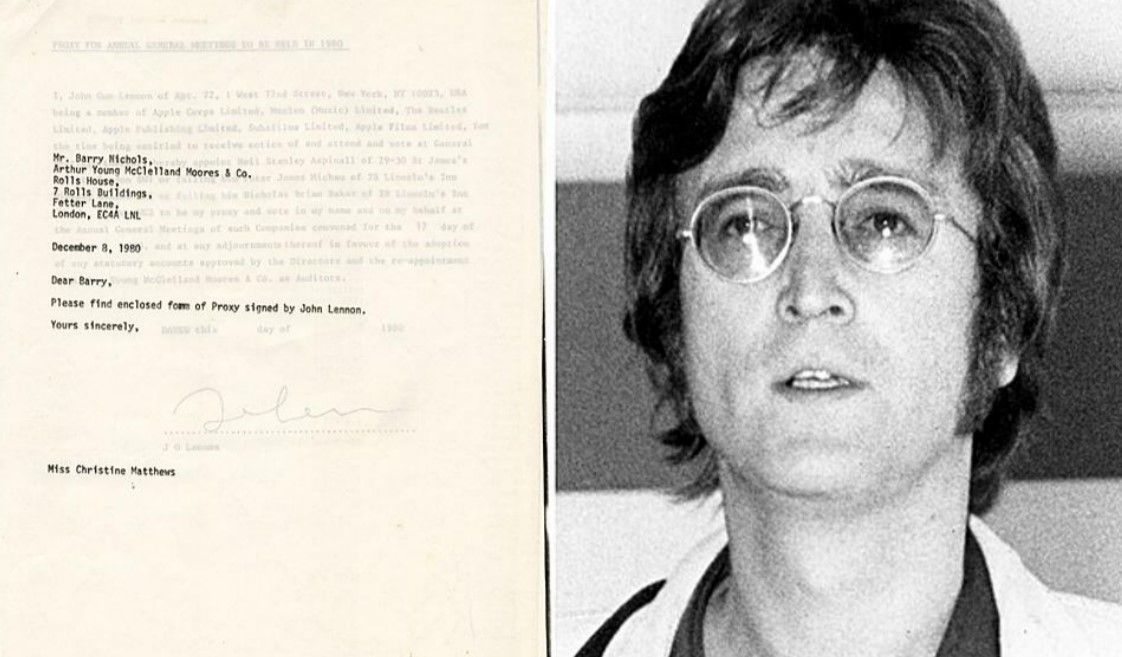 The letter was expected to go for somewhere between $30K and $50K — but there was a flurry of bidders at the end of the 17-day online auction, pushing the final price up early Saturday morning for auction house Gotta Have Rock and Roll.

As for the purchaser’s identity they’re opting to remain anonymous for now.

As TMZ reported, Lennon signed the letter — which is the last known legal doc with his autograph — before sending it to his accountant, Barry Nichols. It listed the names of 3 proxies Lennon chose to vote at an annual meeting for the Beatles corporation, which was to be held 9 days later in London.

Hours after writing it, Lennon was fatally shot by Mark David Chapman outside The Dakota, John and Yoko Ono’s NYC apartment building. Chapman was convicted in 1981 for the murder and sentenced to life in prison.