Treasurer Josh Frydenberg has distanced himself from Scott Morrison’s handling of controversial Liberal candidate Katherine Deves after the Prime Minister repeated his defence of the polarising candidate’s views on transgender Australians.

The Prime Minister’s Office has denied assertions it is orchestrating the Warringah candidate’s election campaign after Morrison maintained his support for Deves earlier this week when she retreated from her apology for likening gender reassignment surgery to “mutilation”. 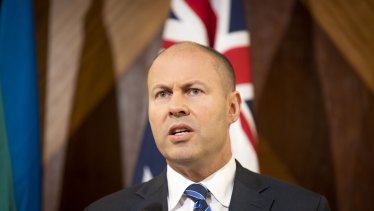 Treasurer Josh Frydenberg has distanced himself from the Prime Minister’s handling of the controversy surrounding Katherine Deves.Credit:Wayne Taylor

Asked whether he would have backed Deves if he were prime minister, Frydenberg told ABC Radio National on Thursday morning, “I would use different language to what the prime minister has used, and I’ve been pretty outspoken and strong in my criticism of the way Katherine Deves has approached this issue”.

It is the second time in a fortnight he has put himself at arms length from the prime minister after Frydenberg said he “would use different words” to describe the NSW anti-corruption commission, which Morrison has repeatedly described as a “kangaroo court”.

At the onset of the campaign, Deves apologised for her language in a slew of now-deleted tweets in which she described trans people as “surgically mutilated and sterilised”, invoked the Stolen Generation and compared her activism to resisting the Nazis.

But on Monday, when asked by Sky News’ Chris Kenny about her “mutilation” remark, Deves said: “That’s actually the correct medico-legal term. It’s very emotive and it’s very confronting and it’s very ugly, so of course people are going to be offended. But when you look at medical negligence cases, that is the terminology that they use. It is also contained the Crimes Act of NSW.”

The NSW Crimes Act prohibits female genital mutilation but states it is not an offence if the operation is “a sexual reassignment procedure and is performed by a medical practitioner”.

Morrison on Tuesday said he would not have used Deves’ language but he had no regrets about her preselection and she raised important, controversial issues about which Australians were “very concerned”.

When asked on Thursday, Frydenberg backed up the Prime Minister’s office’s denial it was handling Deves’ campaign.

“That claim is completely rejected by the Prime Minister’s office and I myself have been very clear in rejecting what Katherine Deves has been saying,” Frydenberg said.

“She has been our preselected candidate, but my focus is on the broader issues affecting this electorate and the country.”