The 25 best Kardashian-Jenner Halloween costumes over the years

Things are still going strong for Kendall Jenner and Devin Booker, as the model took to social media Saturday to wish him a happy birthday, deeming the Olympian her “best friend.”

“Happy birthday best friend @dbook,” Jenner, 25, wrote on Instagram above an image of herself playfully sticking her tongue out while Phoenix Suns guard Booker lay behind her on a beach chair.

She followed the snap up with a photo of her beau smiling, tagging the baller and adding three heart emojis to the post.

The lovebirds celebrated their one-year anniversary in June, posting snaps to mark the occasion.

Jenner posted a cozy photo of the pair, while Booker posted a sunset shot that said “1” with a heart emoji and Kendall’s name. 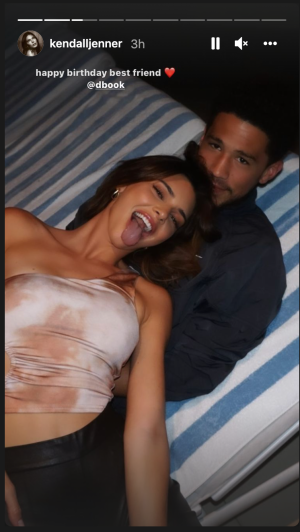 The couple have also been snapped several times since Booker’s Olympic win this summer, yachting their way down the Italian coast soon after his return from Tokyo.

More recently, the pair was seen dining at the same Brooklyn hotspot as her ex, Blake Griffin.

They were snapped leaving Brooklyn’s Lucali last month while in town for New York Fashion Week — around the same time that Griffin was seen outside the pizza joint.

The “Keeping Up With the Kardashians” alum and Booker did not let the Brooklyn Nets forward stop them from showing PDA, however, as they held hands on their way out.