A spooky night out! While visiting Knott’s Scary Farm, Kourtney Kardashian and Travis Barker managed to turn the family adventure into a romantic moment for two.

Kardashian, 42, shared a photo via her Instagram Story of Barker, 45, lifting her up in his arms as the couple shared a kiss on Sunday, September 19. The duo didn’t seem fazed by their creepy surroundings and the Poosh founder later posted another pic of her and her boyfriend’s son Landon, 17, having fun on the Timber Mountain Log Ride. (Barker also shares daughter Alabama, 15, with ex-wife Shanna Moakler) 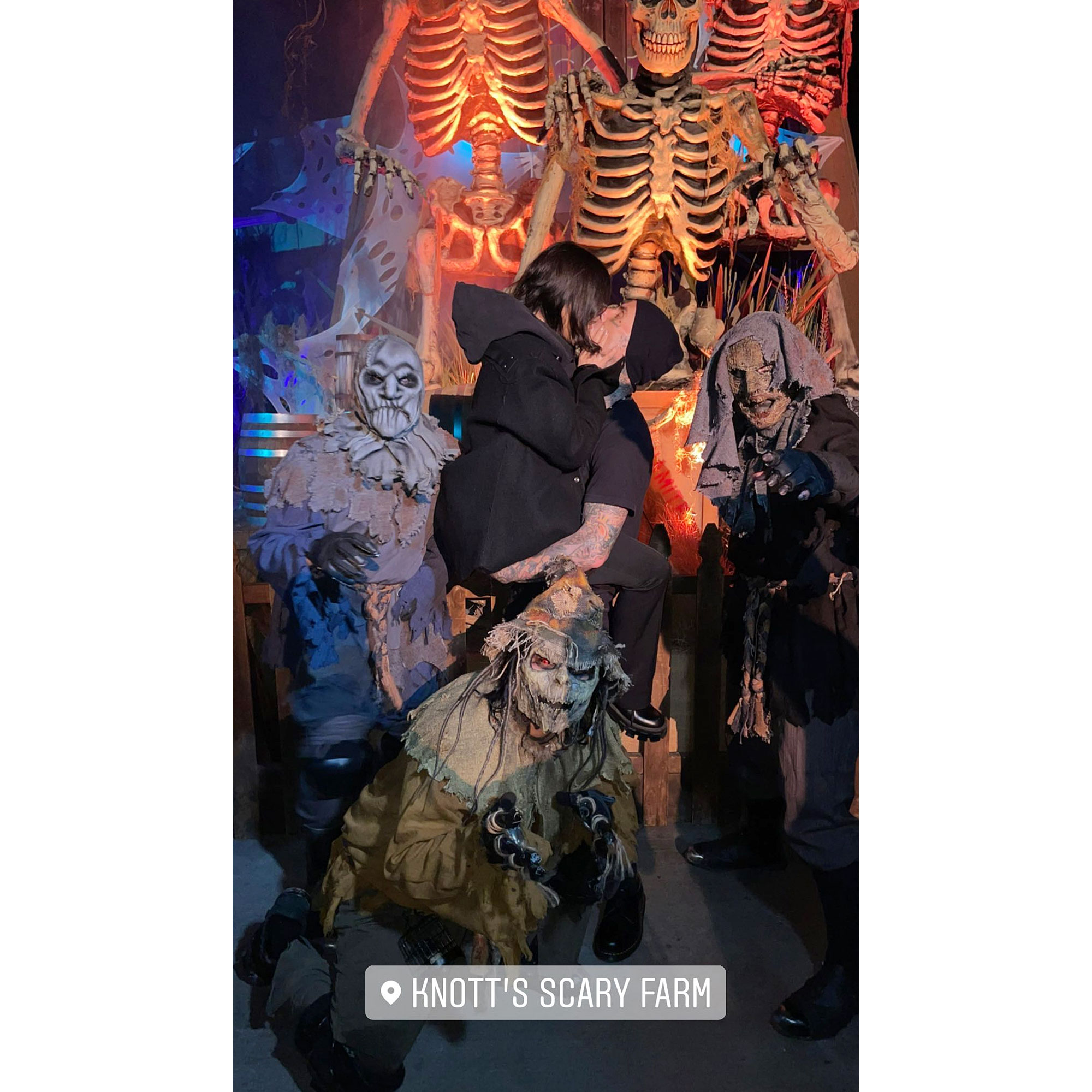 The reality star and the musician’s spooky trip comes after Younes Bendjima called out her ex Scott Disick for shading the couple’s makeout sessions during their European getaway.

“Yo is this chick ok!????? Brooo like what is this. In the middle of Italy,” the Talentless cofounder, 38, messaged Bendjima, 28, alongside a photo of Kardashian and Barker kissing late last month.

Bendjima replied to Disick, writing, “Don’t matter to me as long as she’s happy. PS: i aint your bro.”

The former boxer posted the screenshot via his Instagram Story with the caption, “Keep the same energy you had about me publicly, privately,” to his post. He also added another post, ”Couldn’t miss this one. He been playing around for too long, tried to stay quiet and be the nice guy. Back to work now 10km.”

At the time, the Blink-182 drummer seemingly reacted by sharing a photo of Ray Liotta laughing in the 1990 movie Goodfellas on social media. Kardashian, for her part, tweeted, “John 15:7 If you remain in me and my words remain in you, you may ask anything you wish, and it will be done for you.”

After Disick’s alleged comments made headlines, a source told Us Weekly that the exes have a “nonexistent” relationship outside of their children.

“He’s really just focused on being there for his kids and spending time with them, as well as focused on his brand and any opportunities that come his way,” the insider noted to Us.

Kourtney Kardashian and Travis Barker Bond With Each Other’s Kids

The source also explained that the Flip It Like Disick star has been having issues with his ex-girlfriend’s new relationship, adding, “What’s really got him riled up is the effect Travis and Kourtney’s relationship is having on his relationship with Kourtney. It’s more strained than ever.”

In January, Us confirmed that the performer and the Keeping Up With the Kardashians star were officially dating.

“They have been close friends for years and have been dating for a couple months,” a source revealed. “Travis is very smitten with Kourtney and has been for a while.”