“I’m eating so I don’t have to feel anything.”

“Big Bang Theory” star Mayim Bialik opened up for the first time about an eating disorder for which she’s been in therapy to treat for the past two years.

In a new episode of her Mayim Bialik’s Breakdown podcast, she revealed her latest guest — author Glennon Doyle — inspired her to speak out about it for the first time.

“In this episode, I publicly identify as someone with an eating disorder, which I’ve never done before. That was a big deal,” she told cohost Jonathan Cohen in an introduction that appeared before the interview — but was clearly filmed after it was conducted. “I only feel inspired because of her, to do that. I’ve known about my problems for years, and I’ve been in recovery, as it were, for two years.”

During the interview itself, Bialik explained that she happens “to be a compulsive overeater, and I’m an anorexic and I’m a restricter and I’ve never said that.”

“This is the first time I’ve ever talked about it, because people are like, ‘Well, why are you so overweight?’ Well, because I’m a compulsive overeater in addition to being an anorexic and restricter,” she added. 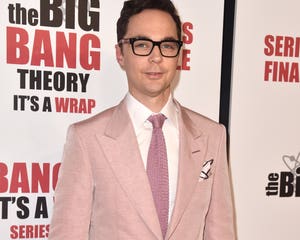 While she’s been in therapy since the age of 17, it was only recently she started dealing with her eating disorder. “I eat too much when no one’s looking,” she also told Doyle. “I’m eating so I don’t have to feel anything.”

Touching on her weight, she expressed exasperation at once being told she was “brave” for putting herself in the public eye at a moment she had gained 30 pounds, before opening up about the pressures put on women in the industry.

“Those are, like, my short-term 2021 goals,” she concluded. “Like, when can I wear all black and not have a stylist be like, ‘We need you in more color.’ It’s like, how about if I wear black because I feel the best and I like it, and they make a lot of cool clothes in the color black?”

Watch the full interview above.