A 2017 Color of Change study found that 91% of television showrunners were white. By the end of 2020, Women and Hollywood reported that 17.9% of television executive producers or showrunners were BIPOC (Black, Indigenous, or people of color). Among the new class growing that statistic is Mike Flynn, Executive Producer and co-creator of CBS’s new police drama East New York.The new series isn’t exactly your typical network procedural and puts a Black woman police captain at the center of the story while also offering a nuanced depiction of Black, immigrant and community life in East New York.

Viewers may be familiar with Flynn’s previous work as a writer and Co-Executive Producer on the Power spinoff Raising Kanan or ABC’s Big Sky. His work on OWN’s Queen Sugar and alongside Lena Waithe for The Chi is also notable. Born in Brooklyn, and raised in Atlanta, Flynn is acutely aware that he’s a Black man telling a story about policing on a major network post-George Floyd and Breonna Taylor’s murders.  The archetypical police procedural which has overwhelmingly criminalized Black men and women on screen for years dates back to the earliest days of television. But it has perhaps never been told through the lens of a Black man. And it’s no small job to get it right. But the first time father of an 11-month-old baby girl is meticulous when creating characters on screen—especially Black women. He’s also a stickler for a diverse cast in front of the camera as well as behind the scenes. 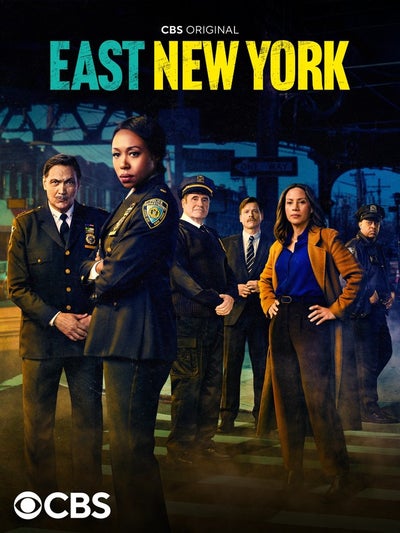 To whom much is given, much is required. But Flynn hasn’t been given anything.  He worked his way up from production assistant to showrunner and is still remembering to lift while he climbs. ESSENCE talked to Flynn about being a Black writer in predominantly white writers rooms, depicting Black women on screen and his newest co-creation, East New York.

When did you know you wanted to be a writer for television and how did you navigate a predominately white industry for over two decades?

MIKE FLYNN: I think it started with my love affair with the story. I grew up reading a lot of books as a kid. I would write short stories just to pass the time because I had a very vivid imagination. In college, I minored in English, and majored in TV and film production.  I figured the best way to get your story told was to write it yourself.

I started with positions like being a production assistant, where I kind of got a bird’s eye view of how the show works from the production level. Once I got promoted to showrunner’s assistant, I got a little peek of what it takes to put a show on the air and keep it there.

Earlier in my career, walking into a television writers room and maybe [there is] one other Black person, Black voice in the room, if I’m not the only one. I [had to] focus on what my voice was, and what I could contribute to the show. I’m a storyteller. So I’m going to tell it while lending my voice and my experience to the show and the characters. [Many of] my shows haven’t been majority Black characters, so I had to find a way to implement my voice and my style of writing into those shows, where I felt that my voice was included, and it was heard and seen on screen. But Hollywood traditionally hasn’t opened its doors to Black people. Once I got my foot in, I have to stay in the house to open up the doors for those behind me and tell more stories of people who look like me.

How have you had to champion your own vision in predominantly white spaces? Have you ever had to stand up to others in the writers room?

FLYNN: There are many, many times where there are white writers who work on shows where they’re no black characters from specific backgrounds. But sometimes they are wise enough to know that they didn’t wake up Black. Even when we’re talking about a cop show being a Black man—they [won’t] understand, or taught by their parents what to do when you’re stopped by a cop. I experienced that. They don’t have that. So it’s like, we’re putting stuff like that into the script. And sometimes when you see things on the page, that doesn’t resonate, you have to drop a note, say, hey, you know, maybe we want to look at it from my perspective, as if  this would have happened to me because something like this has happened to me and this is why this character wouldn’t say XYZ.

You are the co-showrunner and creator for the new CBS police drama East New York. Why a show about East New York?

FLYNN: I was born in Brooklyn. I have a lot of family in New York and my grandparents—they lived in Chelsea. My mom and dad were both born in Harlem. And so I have a lot of roots still in New York, but I was raised in Atlanta—in College Park.  But I think it’s an honor that I get to tell the stories of people who live here [ in East New York.] My dad actually lived in East New York for quite a while. I think it’s our duty to tell that story the right way. East New York has gotten a reputation. It’s been shaded in a particular color that hasn’t necessarily warranted a positive image. I think it’s an untapped area of Brooklyn, It’s also on the fringe of gentrification.. It’s a community whose stories needed to be told in a specific light. So I think this was a great opportunity to tell them.

I think there’s a vibrant community. [There are] murals and  they reflect their community through the arts—paintings and murals on the street. I think there’s an expression that they want to kind of put out into the world, like, This is who we are. There’s a rich culture of different ethnicities that come to this area. There is a different array of characters, like blue collar workers, like working families here that haven’t been portrayed on screen. These are real people who were living here. This is not all about crime [and] drugs that we’ve seen in the news in the past.  I think we want to tell the stories of the people who actually live here.

How do you depict a story around policing as a Black man in a post-Breonna Taylor and George Floyd world?

FLYNN: As a Black man, I would say we have to be careful about making one side more heroic. With cop shows, they tend to be a calling card recruiting for the LAPD or NYPD. That’s not what our show is, we’re not Law and Order. We are focusing on a cop who’s coming in to understand what the community needs. So, I think there’s a delicate line that cop shows today really have to kind of be aware of.  Characters and cops they can’t like really act like how they did in the 90s or 2000s.

You have to really understand the realities of what’s going on in the world. So it is a delicate dance. This is a community that hasn’t historically really had the best relationships with the police. How do you go about mending that relationship? And what, what are the community needs? And how can the police best, you know, do their job without having another George Floyd or another Breanna Taylor, like, learn from their past mistakes? And how to move forward? 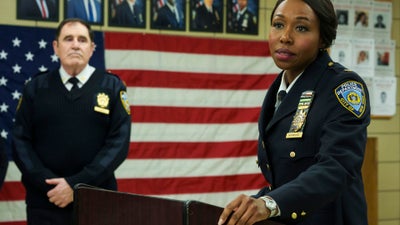 Police procedurals can play into stereotypes but this show puts a Black woman at the center of the police force.  Talk about stereotypes and how your show handles them?

And NYPD is historically an all white “boys club” so I think by having a cop who chooses to come to a community, like East New York and run the precinct. By having casting, like, Regina Haywood and Amanda Warren in that role, I think, you know, you get the perspective of the everyday hardships that a black female cop has to go through in that job.

How has becoming a father changed the way you depict women and especially black women?

FLYNN: I’ve always taken a delicate approach or just a conscious approach when writing women characters, especially Black women. I have a mother. I have sisters. I have a lot of women in my family. So I think by having a daughter, you know, that immediate kind of sense of protection and Goddess feeling that I have for my daughter, I definitely want to make sure that the characters that are portrayed on screen are reflections of the women who I grew up admiring and knowing in my life. I think it’s very important for my daughter to see that on television to show her there’s anything that she can do with her life. And I think by by having, you know, that Black woman on screen in these positions, or in these characters, I think that gives a sense of, ‘there is somebody out there that looks like me, when I turn on the television and they’re in a respectable position, they are respected, and they take their job very seriously.’ And that’s something that I would love for her to really witness as she grows up.