‘You are not at a fashion show!’ Melania Trump is called ‘disrespectful’ and ‘rude’ for wearing sunglasses during D-Day commemoration in France – with Twitter users calling it ‘inappropriate’

The 49-year-old first lady flew to Normandy on Thursday with husband Donald Trump to pay respects to U.S. veterans of D-Day, and was seen wearing a tailored mid-length black coat, matching black heels, and a pair of black sunglasses for the somber occasion.

Images of FLOTUS in her black-framed shades, however, has inspired some Twitter users to criticize her for being ‘disrespectful,’ charging that it was ‘rude’ of her to fail to to remove her sunglasses at the event. 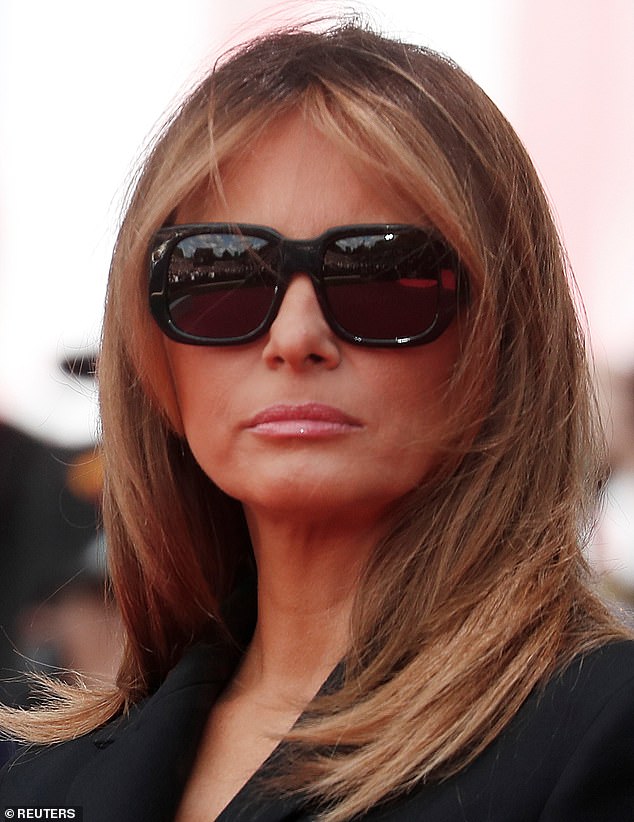 Yikes! Melania Trump has faced backlash online for wearing sunglasses during the D-Day commemoration in Normandy, France on Thursday afternoon 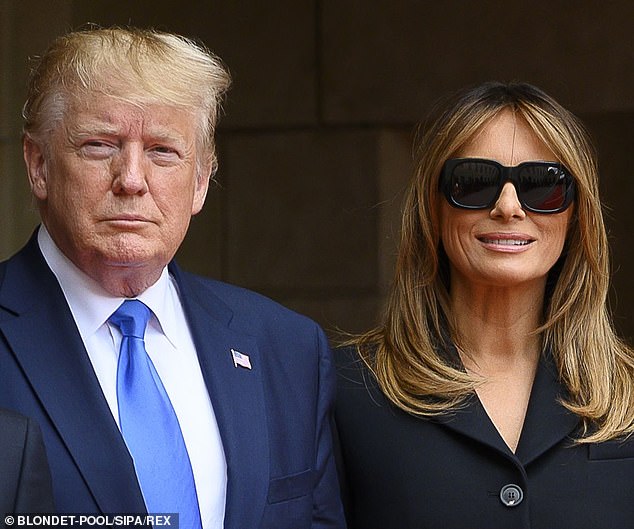 Backlash: Many have said it was ‘rude’ and ‘disrespectful’ of the first lady to keep her sunglasses on during the special event

Some Twitter users have said that it was ‘inappropriate’ for Melania to keep the sunglasses on during the commencement.

Other have branded her ‘ude’ for doing so, with one Twitter user writing: ‘Melania wearing sunglasses. Not appropriate at these ceremonies. #MobsterWhiteHouse.’ 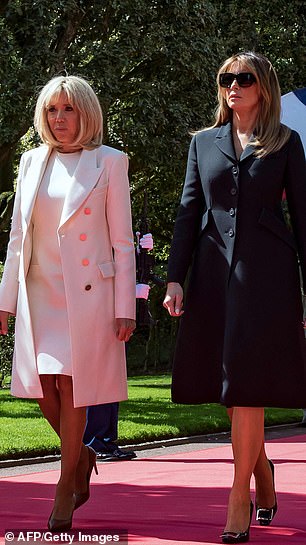 Criticism: Pictured alongside Brigitte Macron (L), many pointed out that the first lady of France wasn’t wearing sunglasses and Melania was

Another wrote: ‘Why is Melania wearing sunglasses? It’s always about her looks. How disrespectful. The woman just has no class.’

‘Melania not bothering taking off the the sunglasses again for the National Anthem. May as well drag a double around. Nobody could know the difference,’ a third Twitter user said.

Meanwhile, others stated that the First Lady’s decision to keep her glasses on during the ceremony made it look like she was at a different kind of event.

‘Melania thinks she’s at Cannes with those sunglasses,’ one user said, while another added: ‘Take off you Jackie O sunglasses at Normandy. Be respectful as you are not at a fashion show.’

Another noted the fact that the first lady of France Brigitte Macron wasn’t wearing sunglasses.

She said: ‘Why did Melania Trump not remove her sunglasses at this most solemn D day ceremony? How disrespectful! Mrs Macron wasn’t wearing sunglasses.

‘I guess she is uncomfortable making eye contact. She thinks she is sitting on the French Riviera sipping champagne!!’ she added.

One person branded the first lady ‘classless and clueless’ while another said ‘how dare’ she have kept her glasses on, branding her as ‘rude’ for doing so.

‘Apparently you were not well brought up,’ she wrote. ‘How dare you keep sunglasses on during our day of remembrance at Normandy.’

‘Unless she has a medical condition, @FLOTUS wearing sunglasses during the D-Day ceremony is disrespectful and cowardly,’ one user wrote, ‘She continues to remain hidden, private, aloof. She veils her eyes from the world. No matter, the world knows she is an impostor. Just like her husband.’

However, several other users have jumped to Melania’s defense, with many stating they don’t believe her wearing sunglasses during the commencement was disrespectful.

One Twitter user said: ‘Will someone explain to me why it was considered rude for Melania Trump to keep wearing her sunglasses during the D-Day ceremonies? Seems like petty nitpicking to me.’

Another said: ‘Since when is wearing rude? The sun is just as bright here as it is in the Tropics, just not as hot. In fact, the sun is lower here, so more the reason to wear sunglasses. I’d want to protect my eyes too. What about people who have prescriptions that darken? Rude too?’ 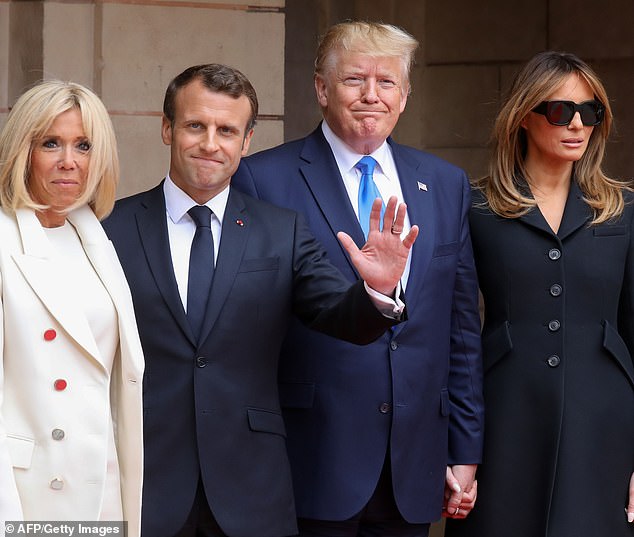 Busy: Melania and Donald Trump (pictured Emmanuel and Bigitte Macron) with flew into Normandy on Thursday to pay their respects to U.S. veterans of D-Day

Shocked: One Twitter user said unless she has an ‘eye condition’ it is inappropriate for her to wear sunglasses at the event, while another wondered if there was a reason she wore them 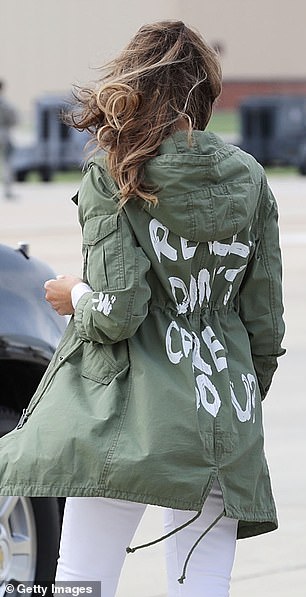 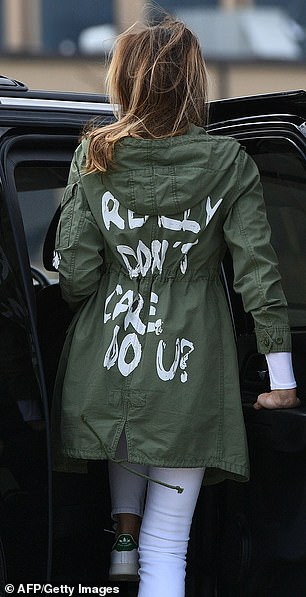 Controversy: Last summer she caused controversy when she wore a jacket that read ‘I Really Don’t Care Do You?’ when she visited migrant children separated from their parents in Texas

It isn’t the first time Melania has caused a stir with her clothing choices at certain important events.

The Trumps welcomed Polish President Andrzej Duda and his wife Agata Kornhauser-Duda to the White House in September.

Melania was seen to be wearing a wool coat while it was 80 degrees outside.

She didn’t remove her coat while dining inside with the Polish first lady, and received backlash on Twitter as people deemed it rude.

And, in what was arguably one of the most controversial outfits worn by the 49-year-old, Melania stepped out wearing a jacket that read ‘I Really Don’t Care Do You?’ when she went to visit migrant children separated from their parents in Texas last June.

Melania received major criticism for wearing the jacket, as many deemed the message on the jacket disrespectful.

In response to criticism, Melania told ABC News that she wore the controversial jacket ‘for the people and for the left-wing media who are criticizing me’.

‘And I want to show them that I don’t care,’ she added.