My mother always said to me, “Don’t write about me until I’m dead, then I don’t care what you write.” She knew the dangers of having a writer in the family. But now that I have her permission to write, I hesitate.

What can I say about my feisty, loving, occasionally infuriating little mum? She was sometimes my greatest fan, but often my harshest critic. Like many of us, Mum had myriad sides to her. The trick was to guess which side was going to appear. I never quite mastered it. 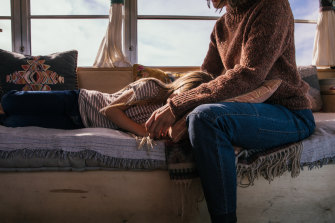 Like many of us, Mum had myriad sides to her. Credit:Stocksy

There was my mum who dived into waves with me and emerged laughing and shaking her tightly permed curls like a poodle. My mummy who made me twice-strained chicken broth when I was sick and would patiently spoon it into my mouth. And my mother who would sweep into the dressmaker, with its glistening satins and soft velvets, for her fitting as she was going to meet the Queen yet again. (Mum actually did meet our dear Queen on multiple occasions, as she liked to say.)

Everybody in the dressmaker’s establishment would know about her impending meet-and-greet and her husband’s important job before we bustled out and down Melbourne’s Collins Street hill, Mum striding into the chic department store Georges, her handbag positioned on her arm just like the Queen. Then she’d leave me waiting and waiting on a chair in the lingerie department; buying a foundation garment could not be rushed, especially when you were about to meet royalty.

There was the mother who wanted the best for me, and if that meant being critical, so be it. “Green makes you look like you’re going to vomit.” “Yellow makes you insipid.” “Just looking at you in red makes me want to vomit.” (No wonder I often wear black!). My hair was wrong, my jeans too tight or too baggy. And, claiming that she’d accidentally overheard me say it on the phone 21 times, I was told I shouldn’t say “yeah”. One should say yes.

Mum liked to make other people feel better, often at my expense. When my friend Deb complained that her nose was too big, Mum fondly stroked her own large beak: “Deb, you have a thoroughbred nose, just like mine.”

I didn’t know what to do with that information. Was I supposed to be the first person in history to ask a surgeon for a bigger nose with a bonus bump?

There were the constant “where are you going and what time will you be home” questions, which is normal. Mum kept a list of hospitals next to the phone and methodically rang each one if I wasn’t home by midnight.

If there was no report of my mangled, maimed body, she would venture out, searching, confident that a mother’s radar would help track down her child. It never worked, but Mum never gave up trying.

If there was no report of my mangled, maimed body, she would venture out, searching, confident that a mother’s radar would help track down her child.

Mum was very good at making me look uncool. When she met one boyfriend for the first time, she was horrified that he’d wear thongs to a 21st. It wasn’t done. Before long my now-husband, all six feet five inches of him, found his size-10 feet crammed into my dad’s size-8 polished brown bowls shoes. Resistance was futile.

But then my witty father died. Suddenly, my mother was cracking jokes, causing me to wonder if she’d been writing Dad’s material all those years. She announced that all her life she had cared too much about what other people thought and now she couldn’t give a dash. All her anxieties and jealousies dropped away. She even apologised for being so hard on me.

When I was critically ill, my 92-year-old mum forgot she had dementia and rang the hospital morning and night to see how I was. My mummy sat at my bedside and stroked my hair. My mother demanded the staff bring me a better pillow and another blanket.

On her last day, Mum saw me crying and smiled at me, squeezing my hand. “Darling,” she said. I waited to hear her last words, full of meaning and wisdom. “Where do you think I’ll go? Up or down?” We both roared with laughter, to the horror of the aides.

I don’t think we ever escape our mums and I’m lucky enough to say that I never wanted to. Not really. For such a little mum, she’s left a huge hole in my life.

The Near Daphne Experience (Affirm Press) by Alison Reynolds is out now.