Neighbours have reacted with fury after a wealthy couple were granted permission to build an underground tunnel through a cliff to their private viewing platform despite fears the rock is ‘fragile’.

Richard and Karen Dance, who own the £650,000 cliffside home on the Isle of Wight, were given the go-ahead to build the controversial 25ft-long subterranean passage to link the basement with the balcony which looks out over the Channel.

Residents have accused the second home owners of treating the coastal village of Sandown ‘like a playground’ and their plans have divided opinion, with some fearing it will damage the cliff.

Local councillors have vowed to challenge the planning decision, citing concerns about digging through the ‘fragile’ cliff to the viewing platform. 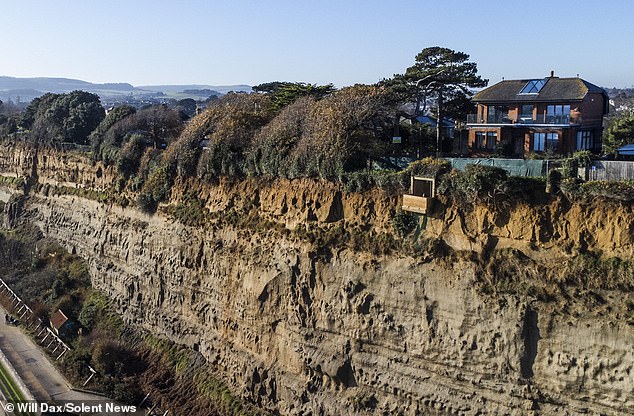 A drone image shows the platform and the Dance’s second home on the cliffside in the quiet parish village of Sandown, the Isle of Wight 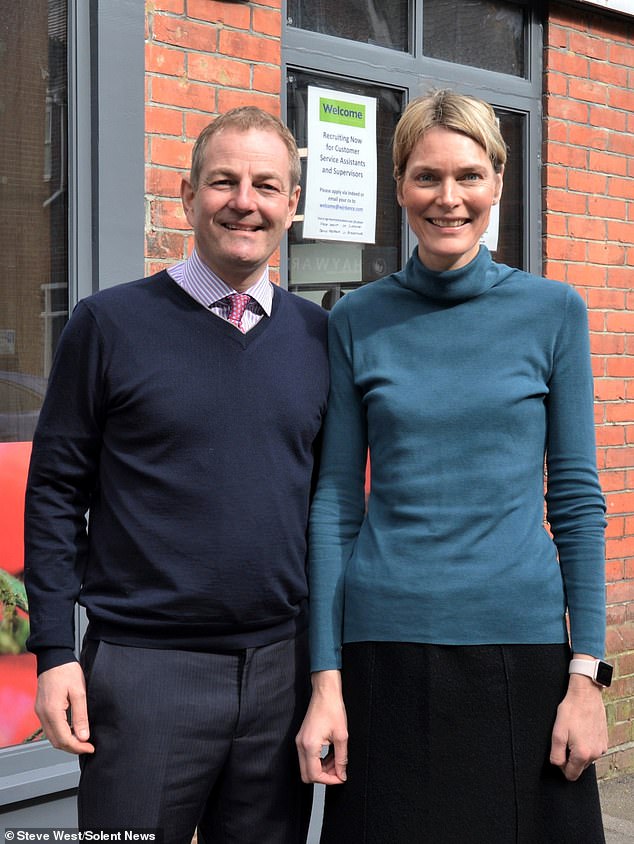 However, the couple argue they are simply completing a feature, which was part of the original plans for the house when it was built more than 100 years ago, by connecting it to a pre-existing tunnel.

The tunnel excavation appears to have already started.

Tig Outlaw, a county and parish councillor, said he is ‘not happy’ but ‘not entirely surprised’ by the decision to let the Dances’ plans go ahead.

He said: ‘We are not going to let that sit without challenging it.

‘We generally feel it is not appropriate to be disturbing a cliff which is somewhat fragile.

Meanwhile, councillor Paul Brading said: ‘Unbelievably, permission has been given for this tunnel.

‘I am extremely disappointed and concerned. We want to get this overturned as it’s wrong – we’re all dead against this decision.

‘It’s disappointing but we do intend to challenge it. We’ll be pushing hard for it to be changed.’

Mr and Mrs Dance, who run a string of convenience stores, live in Brockenhurst in Hampshire’s New Forest and purchased the home overlooking Sandown Bay in 2013. 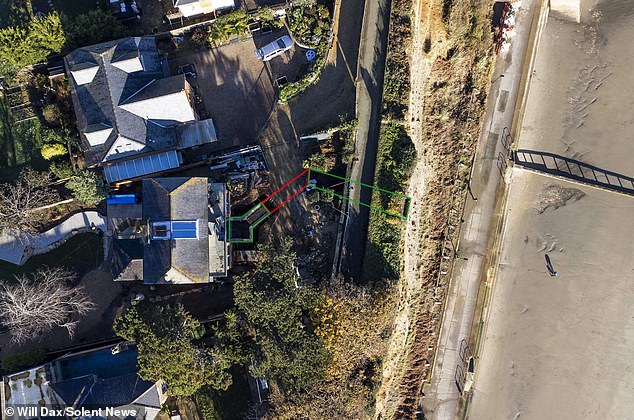 When the house was built in the early 20th century a tunnel leading to the platform – which boasts spectacular sea views – was partially built but access to the house was never completed.

Under the Dances’ plans, the basement of the house will be extended and a new tunnel linking the home with the existing structure – the entrance to which currently sits 30ft away from the property – will be built.

Their application to the Island’s council states: ‘The proposals represent a unique scheme to provide an underground link between an existing house and an existing tunnel and viewing platform.

‘Whilst unusual, the proposal is essentially a domestic extension.’

The Isle of Wight Council felt the plans would be ‘extremely unlikely to affect cliff stability’ based on an expert’s analysis. 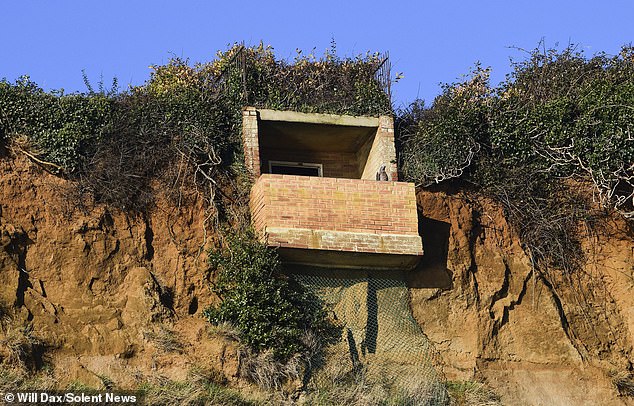 It noted in its approval decision report that the extension ‘would not’ affect the stability of the cliff.

The plan has generated opposition from some locals, however.

Neighbours Chris and Irmgard Keen have lived in their home on the cliff for more than seven years.

Irmgard – who goes by the name Bingo – said: ‘I am closely connected to this place here, love it very much.

‘Such a project is used as a playground by people who don’t live here permanently and [could cause] damage to the community living here.’

The retired care assistant, 66, added: ‘It’s not for the people who permanently live here. 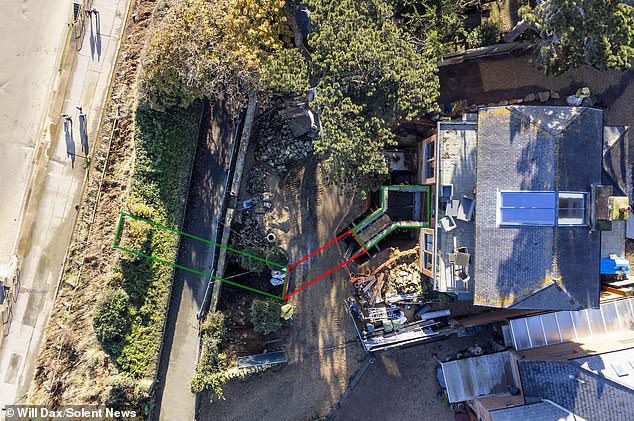 ‘They would do better to spend that money towards supporting the cliff. It’s a community thing that affects us all and nature is the most important thing.

‘Some people do not know what to do with their money.’ The couple, who are trying to sell their home, say they worry the safety aspect will lower the value of the homes around the property.

Retired computer software worker Chris, 65, added: ‘It just seems like an extravagance. It’s not the sort of thing you would use every day.

‘The last thing we want is for the cliff path to be made impassable. It all seems like a bit of a gamble for an unnecessary reason.’

Objecting on the council website, Michael Taplin, a resident of nearby Shanklin, said the plan would ‘disturb an unstable cliff by tunnelling under a section of highway where cars have been banned for safety reasons’.

He added: ‘This is a holiday home and there is no reason for the proposed tunnel.’

Island resident Andrew Hayes said: ‘The cliff path in that area has previously shown to have a friable geology so to go ahead with this application which only has a small benefit to the owners of the holiday home would be extremely dangerous.’

Structural engineering firm Such Salinger Peters argued that the construction would actually improve the stability of the cliff as it is built with steel-reinforced poured concrete, brickwork and waterproof membranes. 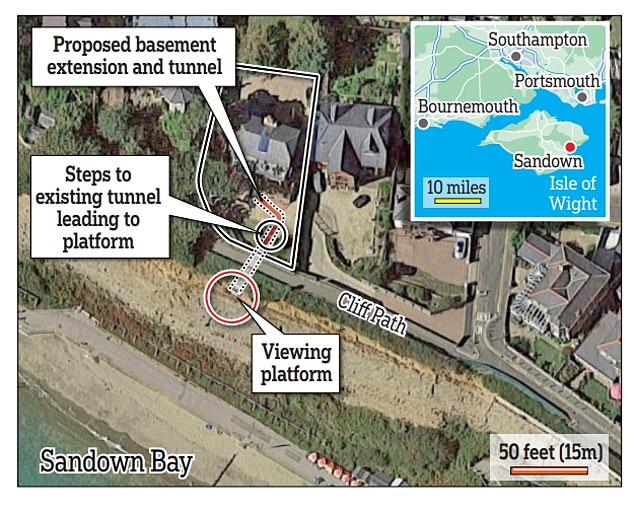 Resident Sam Connelly, 47, director of an engineering company, has lived in the area for his whole life.

He says he is ‘strongly pro’ the application.

He said: ‘I think this is wonderful, the house was always designed to have the home joined to the tunnel in 1911 when it was originally built.

‘The cliff has not changed in a hundred years. We have glass negatives as evidence to support this, there is no difference between then and now. My personal opinion is that [the negative comments are] speculation and amateur opinion with no backing.

‘If you look at the facts, the cliff face is absolutely sound – two independent structural geological reports have been undertaken on the cliff. ‘We should be promoting people doing something good for the island and people upgrading their personal assets.

‘The home is used as a quality rental where the type of people coming will eat out in the local restaurants and spend money in our shops. It is going to help revitalise tourism.

‘It will help stabilise the cliff. These works will protect and lengthen the lifespan of our wonderful cliff path’.

Geologist Geoff Long, who lives just a few doors down, agreed, saying: ‘Why shouldn’t someone want to do something nice on their property? Should we all have sterile lawns in front of our houses or can we actually add a bit of unique character to our properties?

‘Can we not be a bit more neighbourly about this?’

However, Lake Parish Council says the tunnel could affect the stability of the cliffs and has recommended the application be refused.

Paul Brading, county councillor for Lake South and chair of the parish council, says he was ‘born and bred’ in Sandown and ‘knows the area really well’.

He maintains many local residents are in agreement that the work could be ‘dangerous’ due to the instability of the cliff.

He said: ‘I have had several residents contact me expressing concern and I have really grave concerns about any work at all being done.

‘There was a cliff fall in 2010, the last time someone tried to do work there. I just feel it’s very risky to do any work due to the cliff being very fragile.’

Shanklin resident Hilary Corr said: ‘The cliff is fragile, the tunnel is not required.

‘Any actions that might destabilise the fragile cliff path are to be avoided at all costs. Please do not allow this potentially damaging scheme.’