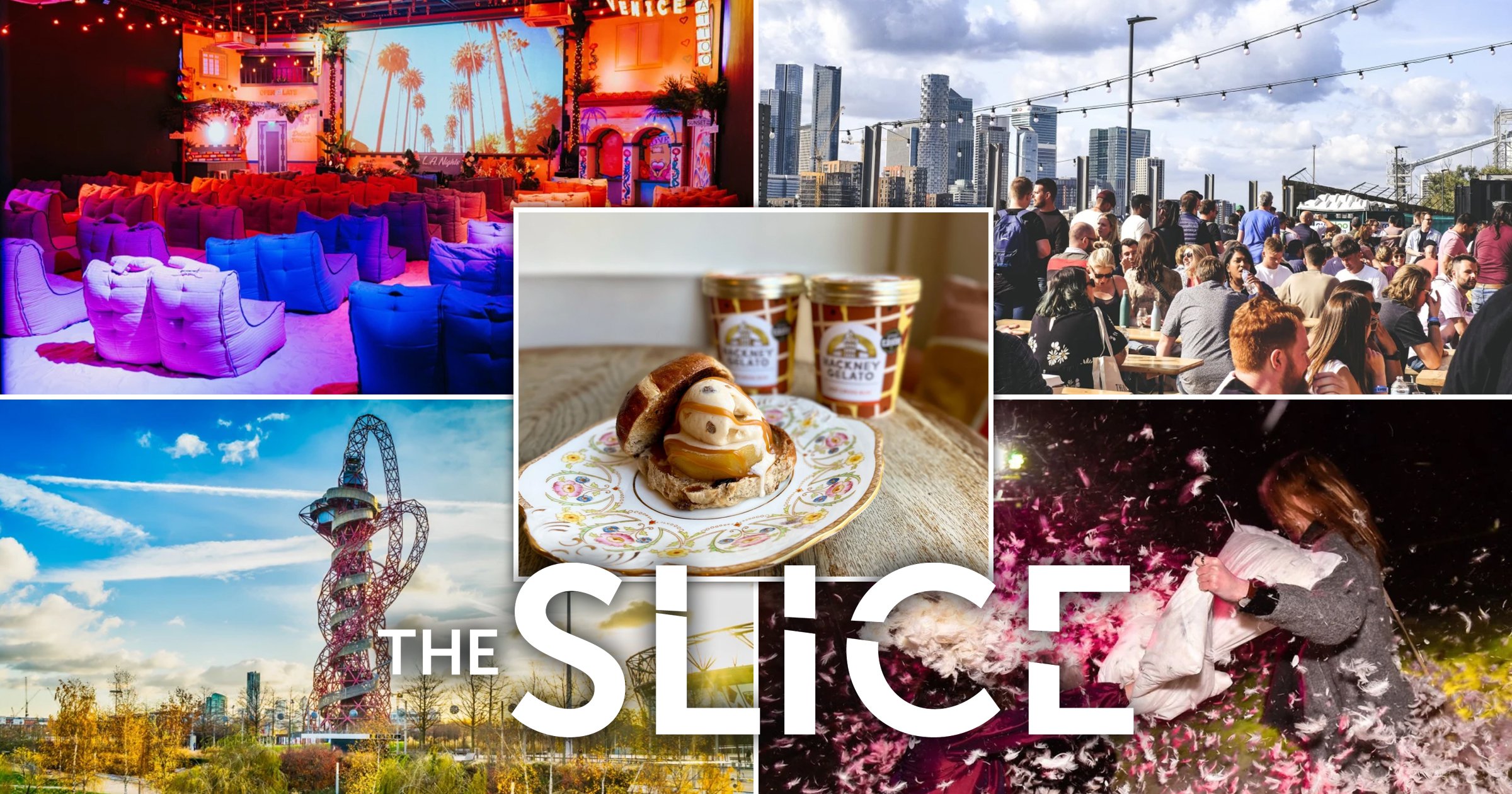 Just when you thought there was no room in London for a single new spot… along come a whole bunch of them.

Like Dopamine Land, where you can revisit a mis-spent youth, Goth Girlfriends, where you can mug up on NFTs, the Comedy Store on the roof at Skylight, Mordern Wharf Terrace, a whole new place to drink and party by the water in Greenwich and a Miami/LA experience at Backyard Cinema.

We’re actually thinking of turning our spare bedroom into a WaterWorld.

A total disconnect from reality? Does that sound appealing right now? Too right!

Which is why we will be down at Dopamine Land, banging on the door waiting for them to open come April 16.

Promising to transport us to an interactive and immersive ‘world of happiness’ – much like three large gin and tonics – Dopamine Land uses cutting-edge technology to ‘channel feelings of relaxation and excitement’.

By cutting-edge technology, they presumably don’t mean the pillow fight room or the popcorn room but probably do mean the visual effects room.

Basically, you get to revisit your childhood by navigating a series of colour-filled – and bubble filled! – rooms and just kick back.

We can’t get enough of the amazing ArcelorMittal Orbit, you know, that huge red curly sculpture – the TALLEST sculpture in the country, in fact! – by Anish Kapoor for the London Olympics in 2012?

One of the best things to do this Easter surely is to head to their observation platform – 80 metres up – and marvel at this incredible work of art.

Rush down to the Olympic Park this holiday, and grab the chance again to take the kids up to see the views of pretty much all of London’s landmarks, play on the touch-screen panels, selfie themselves in front of Kapoor’s concave mirrors and then take the 455 stairs down as you’re followed by a sound installation…

Don’t forget to look up, and out, and inside!  We’re there already with bells on!

If you still can’t get your head around bitcoin let alone NFTs – you know the crypto trading thing connected to art… somehow – then the new pop-up Goth Girlfriends NFT Gallery in Soho might be your first toe in the water.

Described as a ‘new metaverse community space for alternative culture lovers’ – if that means anything to you – it’s somewhere you can check out the work of HE Creative, who apparently make art fro the likes of Kanye with lots of Goth imagery around seeing as the space is the brainchild of ‘goth’ No Face.

Learn how to invest in new art and get just enough information that when someone starts talking NFTs, you know what that means.

All the psychologists are saying that our main priority now that lockdowns are over is getting out there and experiencing things with other people, which is probably the reason the new incarnation of Backyard Cinema is going down such a storm.

With Miami Beach and L.A. Nights, you get to ‘go on holibobs’ and get stuck into the big-screen entertainment – all the new movies – with beach bars and entertainment and actors and sets designed to take you away from your real life.

Your arrival will be via a hotel lobby or a plane (immersive, you see) and they’re hoping to see you in beachwear as you get stuck into the whole Miami experience with lashings of Insta opps.

We love finding new places to drink, especially if they’re by the water with loads of opportunities to get some sun on our skin.

At Mordern Wharf Terrace, down on the banks of the Thames, we’ll be able to join 499 other people (capacity is 500) in an historic industrial yard with uninterrupted views across the water to Canary Wharf, all part of Greenwich’s Brew By Numbers Brewery.

All the seating is reclaimed, so your bums will be doing the right thing, not that you’ll be doing much sitting with the events they have planned, everything from Glastonbury screenings to full-scale parties with big-name electronic music DJs.

Who needs a basic Easter egg (oh, go on then, seeing as you’ve already bought it) when you can have a hot cross bun ice-cream sandwich? Well, it certainly rings the changes.

That’s what they’ve come up with at Notting Hill brunch-spot Eggbreak, where a collaboration with Hackney Gelato has led to this creation: a toasted hot cross bun loaded with caramelized apple and a dollop of hot cross bun gelato, which is ice-cream to you.

Oh with caramel sauce, just in case you needed any more calories.

The gelato alone – with cinnamon-coated sultanas, candied fruit and salted butter – sounds pretty tasty but we do love an HCB and not just at Easter either.

A day at the drag races

If you want a tasteful Easter celebration this year… then steer well clear of our favourite east London vegan boozery, the Spread Eagle where things will be getting appropriately inappropriate.

Notorious for their edgy entertainments, they are laying on a raunchy Easter Res-Erection Quiz, which is basically a drag quiz with added cheeky games, trivia and a whole lot of being shown up in front of your friends while tucking into their signature cocktails (or just regular booze) and the items on their new spring menu.

Wear loose clothing, leave your scruples and dignity at home and let yourself go (oh and try the pie, mash and liquor!).