Victorian Premier Daniel Andrews will refuse to offer independents and minor parties a deal in order to hold onto power for an elusive third term as voters across the state go to the polls.

More than a million people are expected to vote before 6pm across 1700 election-day sites on Saturday to decide who will govern Victoria for the next four years.

Speaking shortly after voting opened, Andrews said he was urging Victorians to opt for a “strong, stable, majority Labor government” as polls pointed to a potential hung parliament.

“The election results will be known later this evening, I am not going to try to predict those,” he told ABC TV.

When pressed on his position on working closely with the Greens or independents to form a minority government, Andrews said his position had been clear for more than a decade.

Liberal leader Matthew Guy, who steered the opposition to a crushing defeat at the 2018 election, said he was confident of victory despite the polls favouring Labor.

“Everywhere I have been, on pre-polling booths, early voting booths, all the places I have been around the state this week, people are pretty clear they want a fresh start,” he told Seven’s Sunrise program.

“We want a reboot in this state, we want to come out of this COVID, putting aside all the dark memories of the past.”

Almost half of the 4.4 million enrolled Victorians have already cast their ballot at early voting centres or via post, leading to a warning from the state electoral commission that this could delay results on election night.

Andrews appears in the box seat to win an elusive third term after a Newspoll published on Friday night showed Labor on track to return despite a swing of almost 3 per cent.

Labor leads the coalition 54.5 per cent to 45.5 per cent on a two-party preferred basis, according to the poll.

Labor starts on 55 lower house seats and would need to shed 11 to lose its grip on power. Newspoll has it on track to keep 45 to 50 seats.

The Coalition has 27 seats and must pick up an extra 18 to govern outright.

However, the latest Resolve poll indicated Labor could lose between eight and 12 seats, putting it in danger of slipping into a minority government.

Independent consultancy RedBridge Group forecasts Labor to end up with between 41 to 48 seats and the coalition to finish in the range of 27 to 33 seats.

The premier broke with tradition to cast his ballot early on Thursday evening, voting outside his electorate of Mulgrave alongside wife Catherine and two of his children.

Guy was joined by his wife Renae and their three children as he cast his ballot at Serpell Primary School in Templestowe, in his electorate of Bulleen, on Saturday morning.

“The polling has been all over the place … particularly the published polling, and I think we’ve seen that at a number of other elections – in South Australia as well as the federal election,” Guy said.

“We prefer to look at the targeted [polling] and our own material and own research, rather than just running off broad samples across the whole state.

“It’s going to be a longer count – you’ll get booth results in earlier which may be very different to the final result, because what happens on the day is maybe not reflected in what’s come during waves of pre-poll [votes].” 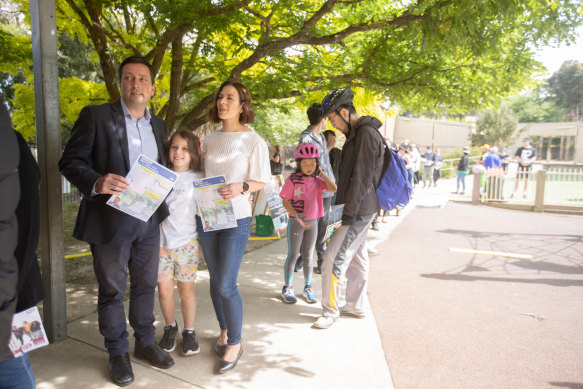 Matthew Guy cast his vote with his family on Saturday morning in his electorate of Bulleen.Credit:Simon Schluter

Greens leader Samantha Ratnam said she was “hopeful” about the possibility of the Greens doubling their number of lower house seats, as she cast her vote at Brunswick East Primary School on Saturday morning.

Richmond, Northcote and Albert Park in Melbourne’s inner suburbs are the party’s biggest chance of increasing its lower house seats, on top of the three it already holds in Melbourne, Prahran and Brunswick.

“Voters are saying that they feel like the major parties are ignoring some of the biggest issues bearing down upon them. [They want] stronger action on climate change … and housing affordability,” Ratnam told reporters.

“We’re really hopeful of picking up seats like Richmond and Northcote.” 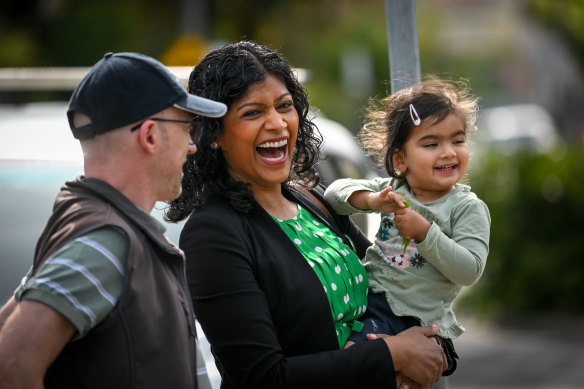 Guy has pledged to steer Victoria’s post-pandemic recovery by fixing healthcare and reducing debt if he is elected premier. Under his $10 billion healthcare plan, he has promised $2.4 billion to repair The Alfred hospital, $750 million for a new Mildura hospital and $550 million to rebuild Caulfield Hospital.

Andrews has pledged to cut electricity bills by bringing back the government-owned State Electricity Commission, and has promised to implement free kindergarten for Victorian families.

Labor has promised overall healthcare reform, including $6 billion to construct or upgrade several hospitals, including up to $1 billion for Maroondah Hospital, $675 million for West Gippsland Hospital and $560 million for Monash Medical Centre.