Donna Amery was beside herself with excitement about the VIP guest visiting the excavator bucket manufacturer she works for on the outskirts of Sydney.

Not Scott Morrison though; Treasurer Josh Frydenberg was the politician she was most thrilled to meet, telling him she was an accountant “just like you” and pulling him aside for a special photograph to keep on her desk. 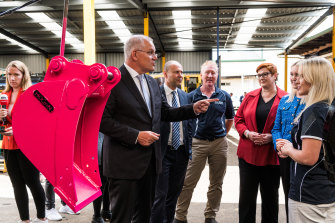 Lucky for the prime ministerial ego, Morrison had declared an hour earlier that elections aren’t a popularity test.

“You go to the dentist, doesn’t matter whether you like him or not, like her or not, but you want to know that they’re good at their job. And that’s what this is about,” he said.

But he was hopeful the photo he posed for with Hogan Engineering’s special pink digger attachment would boost its popularity. The company is selling the pink buckets this month as a special fundraiser for Hawkesbury’s Pink Finss Charity, which has raised more than $2.2 million over 14 years to support women with cancer.

The manufacturer has operated in western Sydney since 1947 and is currently located in the nation’s most marginal seat of Macquarie, held by Labor’s Susan Templeman by 0.2 percentage points. Liberal candidate Sarah Richards, in her second tilt at the seat, backed the pink bucket fundraiser on her social media a week ago.

Morrison met the fourth generation of Hogans working at the business and had a go on a drill press first bought for the firm by director Darren Hogan’s grandfather.

“You can start on Monday!” was Hogan’s assessment of his skills.

The prime minister is talking up an economic plan that he says will create 1.3 million jobs over the next five years, but he’s hoping not to be in the market for a new career himself.

Around the corner, Morrison did find himself top of the popularity stakes with Dindo Suela, who learned his trade growing up in the Philippines before coming to Australia on a temporary worker visa 14 years ago. Suela now has permanent residency and is training a new generation of Australian apprentices. 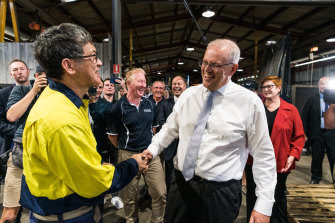 “We are very lucky here, sir,” he said, pumping Morrison’s hand in greeting.

Earlier, at the Rheem hot water system factory in Rydalmere (also in a Labor-held marginal seat, Parramatta), a couple of workers managed to catch the attention of the prime minister and grab a quick photo of him passing by.

Most looked bemused by the spectacle of the 40-strong media pack and dozen more political staff all in high-vis vests but otherwise creating a workplace health and safety nightmare swarming all over the factory floor to follow the leader.

But even there, one worker only had eyes for Frydenberg.

“I watched all your budget,” the tradie told the treasurer enthusiastically.