Australia’s inaugural Climate Change Statement signals the federal government may start raising its emissions reduction target as soon as next year as new data reveals the pace of greenhouse gas cuts has sharply increased over the past six months.

A progress report from the independent Climate Change Authority, released on Thursday, showed forecast emissions reduction had climbed to 40 per cent by 2030 since the May federal election. 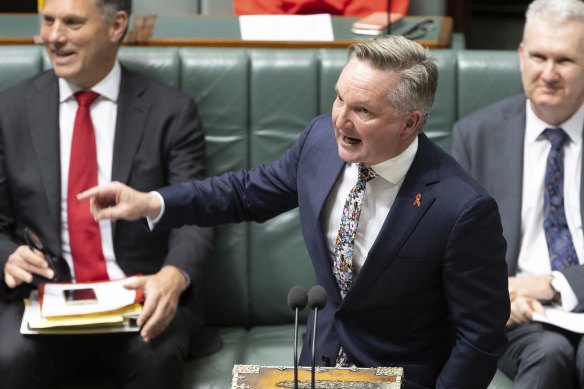 Under the former government, Australia was heading for a 30 per cent cut by the end of the decade.

“Reducing emissions by 43 per cent is an achievable but ambitious target and we are going to need a collective effort and determination across all of the economy to get there,” Climate Change and Energy Minister Chris Bowen said in his first Climate Change Statement to parliament on Thursday.

“There are some who call for more. I understand the sentiment and of course, as we have said repeatedly, we see 43 per cent as a floor, not a ceiling.”

But accelerating the pace of emissions reduction requires the government to confront controversial challenges including reducing reliance on fossil fuels and deploying carbon capture and storage technology.

The Paris Agreement, which commits signatory nations including Australia to limit global warming to as close to 1.5 degrees Celsius as possible, requires them to submit more ambitious emission reduction targets every five years. The next one due is by 2035, with countries required to start developing those goals next year.

Climate scientists have calculated the federal government’s current 2030 target is consistent with 2 degrees or more of warming, and a target to cut emissions by 70 per cent or more will be needed if Australia is to do its part to limit warming to 1.5 degrees.

Independent MP Zali Steggall, who campaigned in the lead-up to the May election for an emissions reduction target of 60 per cent by 2030, welcomed Bowen’s commitment to greater ambition on the government’s goal.

“That shows that the government’s 43 per cent by 2030 is not an ambitious target, it’s a safe target that we can exceed,” Steggall said.

The Climate Change Authority’s report said the government should utilise controversial methods such as carbon offset projects and carbon capture and storage to speed up emissions reduction in the short term.

But experts have warned the current federal carbon offset scheme, set up by the former government, has been selling credits for worthless projects, while climate advocates argue carbon capture and storage technology should not be government-subsidised because it has proved uncommercial and propagates a reliance on fossil fuels.

“Fossil fuels were what was missing from the statement and that’s really the big challenge. Until we have a transition plan out of fossil fuels, this will always be a big problem,” Merzian said.

Bowen’s statement, required under the government’s new Climate Change Act, also confirmed Australia’s annual greenhouse emissions flatlined over the past year, as economic activity ramped back up after the COVID-19 downturn.

Australia pumped out 487 million tonnes of greenhouse emissions in the year to June, about the same volume as the previous 12 months.