South Australian senator Rex Patrick has blind-sided his Centre Alliance colleagues by walking out of the party almost three years after he was gifted a plum seat in Federal Parliament.

Senator Patrick announced on Monday he would now represent his state as an independent, ending a powerful South Australian voting bloc that was a legacy of long-time Senate crossbencher Nick Xenophon. 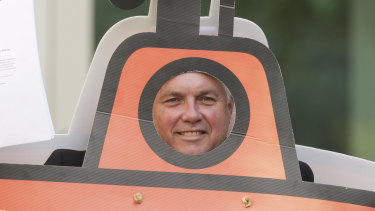 Former Centre Alliance senator Rex Patrick will run as an independent at the next federal election.Credit:Alex Ellinghausen

His former colleagues, Stirling Griff and Rebekha Sharkie, learned of his decision through media reports, with Senator Griff saying it was "disappointing" and a "self-marketing move".

"He has been running his own race for a while now, but his actions have effectively removed a powerful voting bloc that has achieved a remarkable amount for South Australia," Senator Griff said.

Those close to Senator Patrick say he will likely "re-brand" ahead of the next federal election and his exit from the party was to give him the best opportunity to secure 14 per cent of the SA vote to gain a Senate quota.

But his move potentially hands Senator Griff more power to negotiate with the Morrison government, with the Coalition requiring any three of the five crossbench senators – One Nation's Pauline Hanson and Malcolm Roberts, Senator Griff, Senator Patrick and Tasmanian Jacqui Lambie – to pass legislation.

Several Senate figures expect Senator Patrick to form a tighter alliance and potential voting bloc with Senator Lambie, with whom he has a "very close working relationship", sources say.

A spokeswoman for Senator Lambie said on Monday she would continue to work closely with both South Australians.

Centre Alliance sources told this masthead Senator Patrick had alienated his colleagues by becoming "increasingly anti-government" during the past six months.

Both Senator Griff and Senator Patrick face re-election at the next federal poll, however, no discussions had been held within the party about individual positions on the Senate ticket.

Senator Griff, Ms Sharkie and former senator Skye Kakoschke-Moore had voted unanimously for Senator Patrick to take the casual vacancy created by Mr Xenophon in October 2017, when the party founder quit the Senate for his failed attempt to win the balance of power in the South Australian Parliament.

Senator Patrick said he had worked hard to hold the federal government to account and use the Senate balance of power to advance his home state's interests.

"I've used the Parliament as a forum to shame corporate executives whose companies make huge profits but avoid paying any income tax," he said. "I've spoken up in defence of whistle-blowers who have exposed government wrongdoing, policy failures [and] corrupt and unethical behaviour."

He said he anticipated "continuing to confer closely" with Centre Alliance.

"In every Parliament since 1981, South Australia's Senate representation has included representatives from the political centre, standing between the intensely partisan factions of Liberal and Labor," he said. "That centrist representation, assessing issues on their merits and negotiating better outcomes for SA, has served our state very well. I am determined to continue that important and distinctly South Australian political tradition."

The most important news, analysis and insights delivered to your inbox at the start and end of each day. Sign up to The Sydney Morning Herald’s newsletter here and The Age’s newsletter here.