Former prime minister Paul Keating has said Taiwan is not a vital Australian interest and has urged the nation to avoid being drawn into any military engagement with China over the island.

In his first appearance at the National Press Club in almost 26 years, Mr Keating delivered a colourful performance in which he declared that Australia had “lost its way” and was “at odds with its geography”. 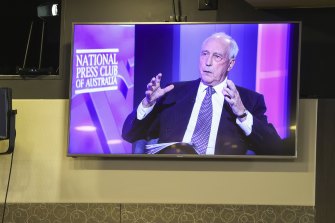 He called British Prime Minister Boris Johnson an “old coconut head”, The Sydney Morning Herald and The Age journalists “ning nongs” and said Australia’s plan to acquire eight nuclear submarines to help contain China in its own backyard was like “throwing a handful of toothpicks at the mountain”.

Mr Keating repeated his criticisms of the Labor Party, singling out foreign affairs spokeswoman Penny Wong, for not standing up to the Coalition’s policies which have infuriated Beijing.

“Eight submarines against China in 20 years time will be like throwing a handful of toothpicks at the mountain.”

“China is simply too big and too central to be ostracised.”

“We are at odds with our geography and we have lost our way.”

“Insiders, which is a kind of peekaboo show for insomniacs.”

“How much tougher do you need to be to have the ning nongs at The Sydney Morning Herald and The Age to notice this?”  (After pointing to a 2013 speech where he called on China to accept more responsibilities and to repudiate the use or threat of force to settle disputes.)

“Britain is like an old theme park sliding into the Atlantic compared to modern China.”

National security experts have been growing increasingly concerned about China’s aggression towards Taiwan, which it regards as a renegade province, with a record number of incursions into its air defence zone in recent months.

“Taiwan is not a vital Australian interest. We have no alliance with Taipei, none, and no document that you find… We do not recognise it as a sovereign state,” Mr Keating said.

The former Labor prime minister said the Australia, New Zealand and United States Security (ANZUS) treaty “commits us to consult in the event of an attack on US forces, but not an attack by US forces”.

“Which means that Australia should not be drawn, in my view, into a military engagement over Taiwan – US-sponsored or otherwise,” he said.

“As long as Taiwan stays as it is I think … the Chinese people in what would otherwise be a civil war will come to terms with each other.

Mr Keating said Australia and other countries needed to accept China’s preeminence in “east Asia and the Asian mainland” and it was misguided for the US to only offer China to be a “stakeholder” in the region.

“You wouldn’t have to be Xi Jinping to take the view, that if you are a Chinese nationalist, to say: ‘Hang on, let me get this right, we are already 1.25 times bigger than you, we will soon be twice as big as you and we may be 2.5 times as big as you, but we can be a stakeholder in your system?’

He said China as a rising power was in “rude phase, they’re in the adolescent phase of their diplomacy”.

“They’ve got testosterone running everywhere, you know, but, but we have to deal with them, because their power will be so profoundly big in this part of the world.”

Mr Keating said China was “simply too big and too central to be ostracised” and criticised the Quad alliance, which includes Australia, the US, Japan and India. He said India had no interest in being drawn into the South China Sea and branded Japan’s ruling Liberal Democratic Party “the Bourbons of the Indo-Pacific.” which should have reached “accommodation with China years ago”.

Lowy Institute senior fellow Richard McGregor said Mr Keating’s narrative about Taiwan “is almost entirely out of date and has been for decades”.

“China’s plan to allow Taiwan to keep its political system has been dead ever since the island became a democracy, and who would believe Beijing after Hong Kong anyway?”

“More than 90 per cent of Taiwanese have no interest in being ruled from Beijing, either directly or in a federation – do they get a say?”

“I agree with Mr Keating that Australia has mishandled aspects of relations with China, but on Taiwan, we have been relatively cautious and for the most part judicious. Our military interest is not in fighting a war over Taiwan but in helping ensure we don’t have to. If all countries, including Australia, just washed their hands of Taiwan, then the balancing role that Mr Keating says the US should continue to play in the region would be null and void. As Taiwan goes in the region, so effectively does US power.”

Mr Keating also mocked Prime Minister Scott Morrison’s trip to Cornwall for the G7 summit in June where the AUKUS defence pact agreement was discussed with British Prime Minister Boris Johnson and US President Joe Biden. Noting that Cornwall was Captain James Cook’s departure point for Australia he said it was an “appalling ignominy” and “speaks volumes” of our incapacity to be part of the region.

“So, you know, here we are running to Cornwall to find our security in Asia. I mean, really. So we are at odds with our geography and we have lost our way.”

Mr Keating rubbished the federal government’s plan to acquire nuclear submarines under AUKUS, saying they will based on dated technology by the time they are built in 20 years time.

“Eight submarines against China in 20 years time will be like throwing a handful of toothpicks at the mountain.”