Prime Minister Scott Morrison has asked his department to check on whether his office was alerted to an alleged rape within days, after revelations of a text message that counters claims the office did not know.

The move came after the disclosure of a text message to Brittany Higgins, who says she was raped in Parliament House in March 23, 2019, saying her experience had been raised with an adviser in the Prime Minister’s office on April 3. 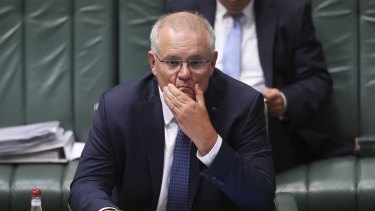 Prime Minister Scott Morrison has asked his department to check more records about who in his office knew about an alleged rape in Parliament.Credit:Alex Ellinghausen

“He was mortified to hear about it and how things have been handled,” wrote a friend of Ms Higgins, in a text to her about a conversation he had with a colleague in the Prime Minister’s office that day.

Mr Morrison spoke to the head of the Department of Prime Minister and Cabinet, Phil Gaetjens, on Friday morning to add the text to an examination that is looking into a range of matters including what his advisers knew and when.

But Mr Morrison insisted he only learned of the alleged rape when Ms Higgins went public with her claims this week.

“I can tell you I knew about it on Monday, and frankly it shattered me,” Mr Morrison told reporters on Friday.

Mr Morrison corrected a question from a journalist on Friday suggesting he had been told by the PMO adviser about the incident in 2019.

“That’s not what the report says at all,” Mr Morrison said, referring to a media report on Friday morning. “It says nothing about telling me anything.”

The text to Ms Higgins from her friend, a man who also worked as a ministerial adviser, said he had spoken to another colleague in the Prime Minister’s office. The Sydney Morning Herald and The Age have seen the text.

The friend had asked Ms Higgins if she wanted him to “reach out to PMO” and she told him it would be “potentially helpful” for him to have the conversation, a step he took within two hours.

“Spoke to PMO,” the friend told Ms Higgins on April 3, 2019, without naming the man in the PMO he had spoken to.

“He was mortified to hear about it and how things have been handled. He’s going to discuss with COS – no one else. I flagged need for councillor [sic] and desire to be closer to home during election.”

Ms Higgins replied: “Thank you for doing that. Honestly I really appreciate it.”

The mention of the COS, or chief of staff, appears to be a reference to John Kunkel, the top adviser in the Prime Minister’s office.

The text message to Ms Higgins does not convey what Dr Kunkel may have said and does not confirm a conversation with Dr Kunkel, because Ms Higgins’ friend spoke to an adviser in the Prime Minister’s office rather than Dr Kunkel directly.

The text messages did not confirm the identity of the adviser said to have been “mortified” but The Sydney Morning Herald and The Age approached two people said to be involved in the exchange. One declined to comment and another did not respond.

Dr Kunkel and another PMO adviser, principal private secretary Yaron Finkelstein, knew of an incident involving Ms Higgins at this time, but no files or messages have emerged to show they knew it was an alleged rape.

The alleged rape took place on Saturday, March 23, in the office of Defence Industry Minister Linda Reynolds. The minister’s chief of staff called Ms Higgins and her alleged assailant into separate meetings on the Tuesday. He was fired that day. On the Thursday, Ms Higgins told the chief of staff it was an assault and she had woken with the man on top of her. The following Monday, April 1, Ms Higgins told Senator Reynolds directly about her experience.

Mr Morrison said he asked Mr Gaetjens on Friday morning to add the text to his inquiries.

“We’ve had that conversation that morning and I would expect that to be considered within the scope of what he is already doing,” he said.

Key facts are contested in the government account of who knew about the events, given Ms Higgins said this week Mr Finkelstein called her last year to “check in” on her. Mr Morrison said there was no record of that call.

Labor leader Anthony Albanese said Mr Morrison’s claims were “not credible” given what had emerged this week.

“And the dissembling nature of his answers before the Parliament is not good enough,” he said.

Mr Albanese said the text message revealed on Friday showed it “defied belief” for the government to argue that the matter was not raised within the Prime Minister’s office ahead of the election in May 2019.

“I’ll say this about Ms Higgins, she has shown great bravery this week,” he said.

“And for her to not get the respect of getting straight and clear answers about what the response was at the time, about who was told and what they were told at the time, is disrespectful of Ms Higgins.