Shortly before lunch, Prime Minister Scott Morrison was in a reflective mood about the standard of (mis)behaviour in the national Parliament, a workplace regularly so grim it would leave a self-respecting human resources manager with a dreadful case of the vapours.

“Just because this is a challenging environment … this is no excuse to normalise inappropriate, unhealthy and unprofessional behaviour,” he said. 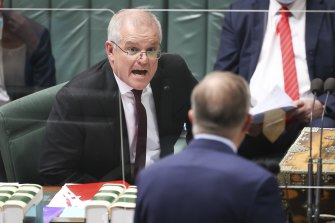 A couple of hours later, amid a wild squall of verbal slurs, the Prime Minister was ordered to withdraw the imputation that Labor members were a bunch of jailbirds.

In the Senate, accusations flew that unnamed senators had been heard growling and making “dog noises” as independent senator Jacqui Lambie gave a speech.

Just another day at the office, then.

It is, of course, the last week of parliament for the year, a period normally marked by get-squares from all sides as governments and oppositions try to leave the impression each is more rugged than the other.

PM Morrison, we should explain, had legitimate reason to spend the morning calling for better behaviour in Parliament.

He unveiled a review that found more than half of all people in Commonwealth parliamentary workplaces had experienced bullying, sexual harassment or actual or attempted sexual assault.

And then he and his colleagues and opposition MPs armed themselves for the donnybrook known as question time.

In the Upper House, Greens senator Sarah Hanson-Young hotly declared it altogether inappropriate “given what has been handed down today to have growling and dog noises coming from this side of the chamber while a female member in this place [Senator Lambie] is on her feet”.

Labor’s Senate Leader Penny Wong backed Senator Hanson-Young’s accusation, and asked for the perpetrator to “do the right thing and withdraw”. No one did.

Down in the House of Stoush, the Prime Minister took umbrage at Labor’s suggestion his long-proposed integrity commission wouldn’t have the power “to investigate a cabinet minister’s decision to grant visas to au pairs for mates”.

It was a dig at Peter Dutton’s decision when he was Immigration Minister in 2015 to overturn a deportation order on an au pair reportedly after representations from the family of AFL boss Gil McLachlan.

Morrison attempted a handspring with pike to turn the question back on Labor, claiming Albanese was a keen supporter of former NSW state Labor minister Ian McDonald, who was jailed for corruption. 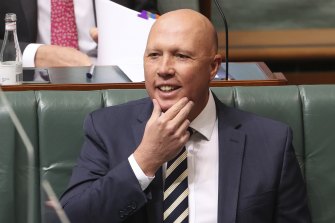 Things went to high drama at warp speed, with Albanese and Dutton furiously facing off. It was a reprise of an earlier confrontation, when Albanese had told Dutton to “sit down, you boofhead,” resulting in Dutton’s taunt of “glass jaw”.

“As I said, more of their members are in the Silverwater branch of the Labor Party,” he shouted, referring to Silverwater prison in NSW.

The new Speaker, Andrew Wallace, screwed up his courage and requested the Prime Minister withdraw.

The PM, possibly recalling his caution about kinder and gentler behaviour, duly agreed.