Poor old Emily was put out to pasture… had she upset the commissars? HENRY DEEDES sees Miss Thornberry give way to a docker’s daughter

There comes an agonising time in every career where experienced hands must eventually cede to new blood. Slowing pack horse gets put out to pasture. Creaky executive is replaced by thrusting young whippersnapper.

Such a cruel scenario played out at PMQs yesterday, where mercifully we were spared yet another Theresa May/Jeremy Corbyn screechfest due to the D-Day commemorations in Portsmouth. Normally when Jezza’s away, we are treated to the cut glass vowels of Emily Thornberry, Labour’s hot-breathed foreign affairs spokesman and pride of Islington’s sweet-scented salons.

Yesterday, however, she found herself unceremoniously relieved of command in favour of Rebecca Long-Bailey, the youthful shadow business minister who’s been an MP for just four years. What had poor Thornbug done? 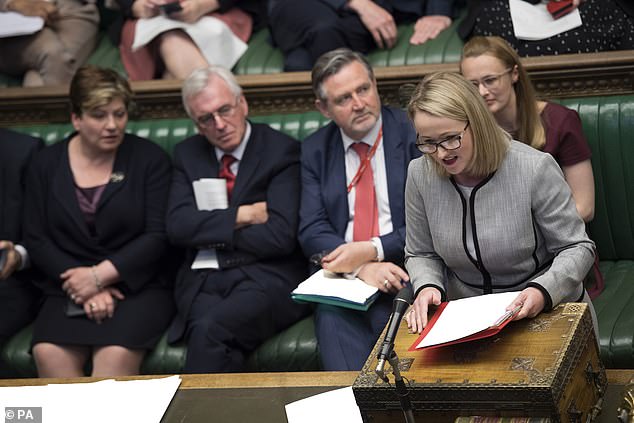 Normally when Jezza’s away, we are treated to the cut glass vowels of Emily Thornberry, Labour’s hot-breathed foreign affairs spokesman and pride of Islington’s sweet-scented salons

There was speculation she’d upset the commissars after criticising the party’s shilly-shally position on Brexit following the EU elections. Dissidents, comrades, will not be tolerated.

Docker’s daughter Long-Bailey, by contrast, is a dedicated loyalist to the Corbynite cause. She doesn’t so much drink the Kool-Aid, as our yankie doodle chums say, as quaff it by the gallon load.

Her rapid rise through the party is said to owe much to shadow chancellor John McDonnell, who refers to her with uncharacteristic tendresse as ‘Becky’. It was notable the old firebrand made a rare appearance on the front bench yesterday, skidaddling soon after her questions were exhausted.

So how did she do? OK, I suppose. She’s unlikely to be troubling the after-dinner speaking circuit for a while. But not bad. She was far better, at least, than the SNP’s stoney-faced stand-in Kirsty Blackman. Not since Gordon Brown has Parliament seen so glum and earnest a creature. 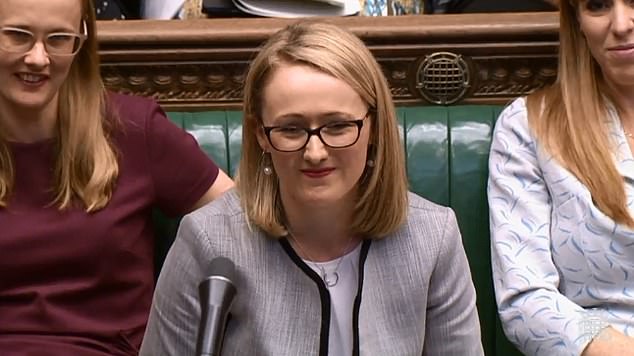 Yesterday, however, she found herself unceremoniously relieved of command in favour of Rebecca Long-Bailey, the youthful shadow business minister who’s been an MP for just four years

It can’t have hurt Corbyn’s protegee that the chamber was far from its most intimidating. Following President Trump’s state visit, the House had a fuggy, morning-after feel to it. Empty seats on the Government side everywhere. Much of the front bench was absent. The die-hards from the ERG weren’t there either, having brazenly scheduled a meeting.

Long-Bailey arrived early to do some last-minute swotting with shadow equalities minister Dawn Butler. Eh? Anyone who caught la Butler’s performance on Newsnight on Tuesday would surely have treated any advice she had to offer with extreme caution.

She surrounded herself with shadow youth affairs minister Cat Smith and fist-pumping education spokesman, Angela Rayner, who was sporting spiffing pink Dr Martens boots. Thornbug sat several places down, sucking furiously on a packet of mints. To her credit, she remained as gobby as ever throughout the session.

At one point, following a question from Tim Loughton (Con, East Worthing and Shoreham) on Tuesday’s anti-Trump protests, I saw her shout a word which sounded like ‘rollocks’.

We kicked off, predictably, with the usual raft of tributes to various football/netball/tiddlywinks players’ recent sporting successes. When will we be rid of these meaningless banalities? Twitchy Cabinet Office minister David Lidington, deputising for the Prime Minister, graciously welcomed his new opponent to her new responsibilities while waspishly lamenting his erstwhile foe’s consignment to ‘internal exile.’

There was then a warning to his new opponent, suggesting if she outperforms dear leader Corbyn too much, she might find herself being carted off to the gulag.

‘Oh, he’s full ‘o the banter today isn’t he, Mr Speaker?’ Long-Bailey chirped back in her broad Eccles lilt. She focused much of her attention on Mr Trump’s visit, creating a song and dance out of his remarks on the NHS and his sceptical views on climate change. Blunt stuff, of course. Lidington batted it all away insouciantly.

For a while, Mrs May’s soi-disant ‘de facto deputy’ was enjoying himself, twisting and twirling on his heels as he sought his colleagues’ imprimatur for his well-rehearsed bon mots. Then Laura Pidcock (Lab, North West Durham) dismissed him as ‘a stand-in while the vultures circle’. His bubble, such as it was, quickly seemed to burst after that.