Jones, who gives a disturbing performance as the volatile loner who would become the Port Arthur killer, was so overwhelmed onstage at the awards ceremony that he managed only to thank director Justin Kurzel before finding himself unable to say anything else. 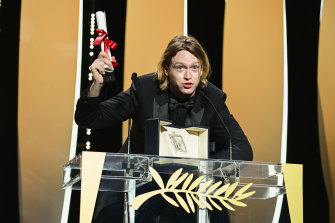 “I can’t do this! Thank you!” he gasped finally before scooting back to his seat.

Later, at a press conference with award winners, Jones said he was amazed to win at a festival showing some of the best films in the world.

“I believe in our film, but I know there are other great works too,” he said.

As an American, he said, he had been schooled by Kurzel in Australian culture – including literature, music and old TV shows – and Australian masculinity in particular, “which wasn’t very different from Texan masculinity … All I had to do was absorb everything he gives and then just be.”

And learn the accent, of course, for which he thanked dialect coach Jenny Kent, “without whom I wouldn’t be able to speak Australian”.

Nitram was shot in Geelong, with Point Cook standing in for Port Arthur, during last year’s lockdown. “When we finished the film, I think we all felt we had something extremely special on our hands,” Jones said. That was confirmed at the film’s Cannes premiere on Friday.

“It was truly wonderful to hear the audience throughout the film. I thought there was a connection with the film, an understanding. It was a very incredible experience.”

Other awards made history. This was the 74th edition of the Cannes Film Festival. For only the second time, the pinnacle prize of the Palme D’Or went to a film directed by a woman.

Titane was only French director Julia Ducournau’s second feature, but her ferocious fable of body horror, murder and mechanical mayhem clearly persuaded the jury with what Lee called “its craziness and genius”.

This was, he said, the only film he had seen “where a woman is impregnated by a Cadillac”.

In Un Certain Regard, the section dedicated to new directors and distinctive voices, four of the six prize-winners were women.

The Camera D’Or, awarded to a debut film from any of the festival’s sections or sidebars, went to Croatian newcomer Antoneta Alamat Kusijanovic for her film Murino, about generational conflict between father and daughter living an island life that is much too tranquil for the woman at the story’s centre.

Lee’s scattergun style – and lack of French – created the night’s biggest faux pas and a story that momentarily threatened to overshadow the historic recognition of women in film. Not long after the jury had arrived on stage, he was asked to begin proceedings and he immediately announced the winner of the Palme D’Or.

Conventionally, the Palme is the last award to be announced, following an hour’s mounting suspense. Lee had unintentionally thrown the protocols out of the window, but the show had to go on.

Chastened, he didn’t announce anything further without double-checking with his fellow jurors but, by the time he arrived at the jury press conference afterwards, he had bounced back.

“In my 63 years of life, I’ve learnt people get a second chance,” he said. “This is my second chance. I apologise for messing up.”

He had already apologised to the team from Titane. “And they said forget about it, Spike. That means a lot to me.”

Not that it felt like a disaster. As jury member Maggie Gyllenhaal put it, it was “an injection of humanity right into the middle of the ceremony”.

There was, indeed, a sense that the festival was reborn somewhat changed. Titane was the talk of the journalists’ terrace, but nobody thought a horror film would be seriously considered in a field that included several previous Cannes laureates and established masters.

They were proved wrong. It was also a festival where overwrought emotions, pent up by isolation, ran high. Many of the feted film teams wept openly as their audiences applauded, an acknowledgement of how much it meant to be together in a cinema again after a year of COVID-19.

Along with Lee’s great error, so much spontaneous feeling cut through the pomp of an event that can sometimes feel hidebound and stuffy.

The festival’s second prize, the Grand Prix, was shared between Cannes regular Asghar Farhadi with A Hero – in which a man’s life falls apart when he returns a bag of money to its rightful owner and becomes a momentary media star – and a downbeat story of a train journey, Compartment No 6, by a virtually unknown Finnish director, Juho Kuosmanen.

“I’m such a fan of this man, I don’t know what I’m doing here,” said Kuosmanen as he was invited on stage with the revered Iranian maestro.

It was a sentiment very much in the spirit of Cannes 2021.