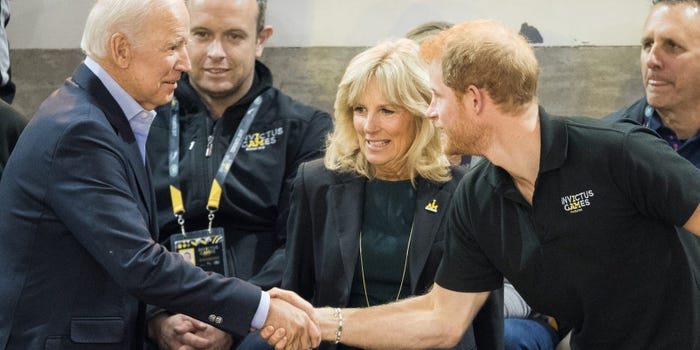 President-elect Joe Biden once joked that his wife, Jill Biden, was spending too much time with Prince Harry.

Then-Vice President Biden and Jill attended the 2016 Invictus Games in Orlando, Florida, a charitable sports tournament for injured and wounded service personnel and veterans founded by Harry in 2014.

At the 2016 event, the now-President-elect was pictured with Harry for the first time. Jill, however, had been to the Invictus Games' inaugural tournament in London in 2014, where she was pictured sitting with Harry while cheering on American competitors.

During the Games' Orlando tournament, Biden joked to the Daily Mail that when his wife attended the event in London, "she spent too much damn time with Prince Harry!"

The former second lady has been a supporter of the Invictus Games since its inception.

In a press release from the US Department of Defense, Jill referenced the sporting event in Colorado that Harry had attended in 2013, which inspired him to create the multi-national Invictus Games.

She said Harry "saw our Warrior Games in Colorado, and so now he's brought it to a global scale, and we have 14 countries and 400 athletes competing, and it's been great."

For example, in a 2019 interview with the UK-based publication The Sun, Trump was asked about Markle's previous comment that she would move to Canada if he were elected in 2016. He responded, saying: "I didn't know she was nasty."

Trump has also criticized Markle and Harry for encouraging people to vote ahead of the 2020 presidential election. During a Time100 special, Markle called it "the most important election of our lifetime," which some people interpreted as a way of targeting Trump.

Trump responded to Markle's Time100 remarks during a White House press briefing in September, saying he's "not a fan of hers."

"And I would say this — and she probably has heard that — but I wish a lot of luck to Harry, because he's going to need it," Trump said.