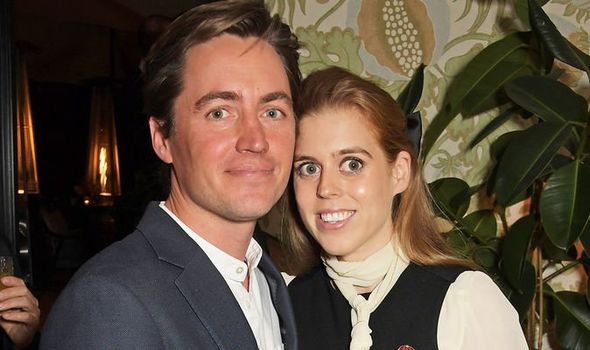 Princess Beatrice and Edoardo Mapelli Mozzi stepped out in public last night to attend an intimate dinner. The royal and her husband were photographed at Gabriela Peacock’s book launch. Express.co.uk spoke to body language expert Judi James about the couple’s dynamic.

Princess Beatrice gave birth to her first child in September.

Sienna is Edoardo’s second child, he has a son, Christopher Woolf, aka, Wolfie from a previous relationship.

Since welcoming Sienna into the family, the couple haven’t made many public appearances.

But last night, they posed for photographers.

Speaking about the royal’s body language, Judi said: “The body poses look pea-in-a-pod identical between Beatrice and Edo’s September photo and the ones taken recently this week.

“But some of the subtler details suggest a gradual evolution here from ‘excited but also potentially exhausted new parents’ to a more relaxed, confident and sophisticated-looking couple in love.”

In terms of Beatrice’s body language in particular, the expert continued: “Beatrice’s eyes are always rounded and wide when she smiles but her brows are higher in the earlier pose, making her eye expression one of delight but also mainly shared excitement.

“She leans in towards her husband with a suggestion of a desire to be hugged and protected.

“And although Edo turns in towards his wife he is also partly turned outward, hinting that protective presence is being created.”

There are several other photographs of Beatrice posing with with friends and some alone.

“Beatrice’s solo pose looks sweet, with some of her gestures suggesting shyness, like the barrier hand clasp held low in front of her torso,” Judi said.

“The more important signals suggest a growing confidence and even firmness though in her role as a new mum.

“Her feet are splayed with an equal balance of her body weight, which is often a sign of a more self-assured personality, and her smiling face is turned straight to the camera with a wide but also level eye expression.”

Last month, Princess Beatrice and Edoardo were pictured at Ned’s Club Lounge and then Philippos Of Greece Wedding in Athens.

Speaking about their appearance at the Ned, Judi said: “In the more recent pose the couple stand even closer with their heads held close in a gesture of trust and affection.

“Their body language looks rather more mirrored, with both looking happy and very much in love.

“Their smiles are also more mirrored here, with those matching rounded cheeks suggesting feelings of authentic joy as well as mutual affection,” she added.