Bold in blue! Queen Maxima of the Netherlands dazzles in a navy gown as she joins King Willem-Alexander for a glittering gala with the Norwegian royal family in Oslo

Queen Maxima of the Netherlands looked breathtaking as she and King Willem-Alexander attended a gala dinner with the Norwegian royal family at the Royal Palace in Oslo today.

The mother-of-three, 50, and her husband, 54, began a whirlwind three day trip to visit the country earlier today, and were spotted stepping off the plane at Oslo Gardermoen airport this morning.

And this evening the royals looked dazzling as they arrived at gala dinner at the Royal Palace, with Queen Maxima walking into the event arm-in-arm with the Norwegian King Harold, 84.

Maxima was elegant in a glittering floor-length gown that transitioned from a dark navy to a pearl blue.

The pair were also joined at the event by  King Willem-Alexander, as well as members of the Norwegian royal family including Queen Sonja, Crown Princess Mette-Marit and Princess Martha Louise of Norway. 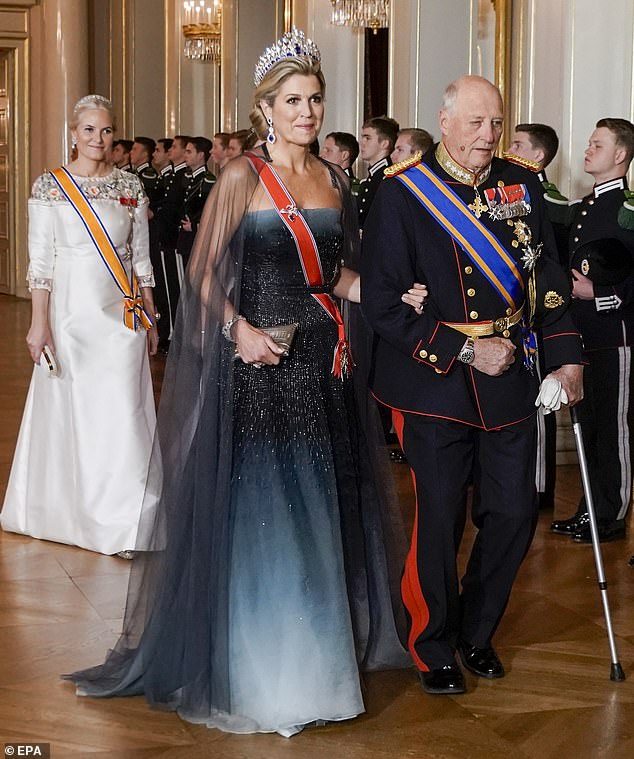 Queen Maxima of the Netherlands looked breathtaking as she and King Willem-Alexander attended a gala dinner with the Norwegian royal family at the Royal Palace in Oslo today (pictured, Maxima with King Harald)

The royal couple were dazzling as they joined members of the royal family including King Harald, Queen Sonja, Princess  Mette-Marit of Norway and Princess Martha Louise 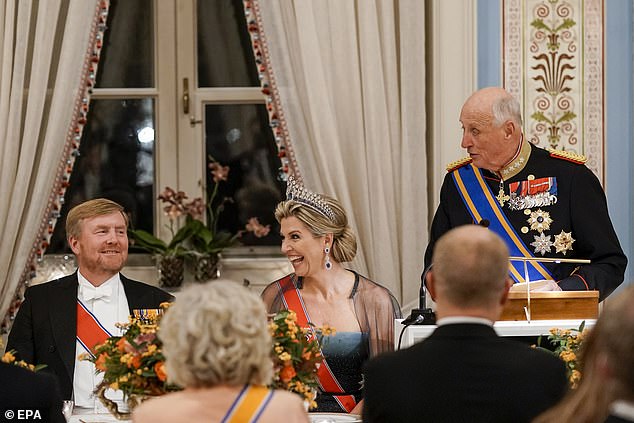 Queen Maxima was in high spirits at the dinner at the Royal Palace in Oslo tonight, and couldbe seen chuckling during a speech by King Harald

The dress was adorned with slight sparkles that shimmered as she moved and acted as a highlight for her matching tiara and diamond earrings.

Around her shoulders was a sheer draped cloak that complemented her dress which a royal red sash was tucked under and pinned together with a sparkling brooch.

Opting for a more dramatic makeup look, the Netherlands Queen sported a smokey eye that emulated the colours of her dress.

King Willem-Alexander looked especially dashing too, as he adorned white tie formal attire for the occasion that consisted of a black coat and tails and red royal sash that matched his wife’s. 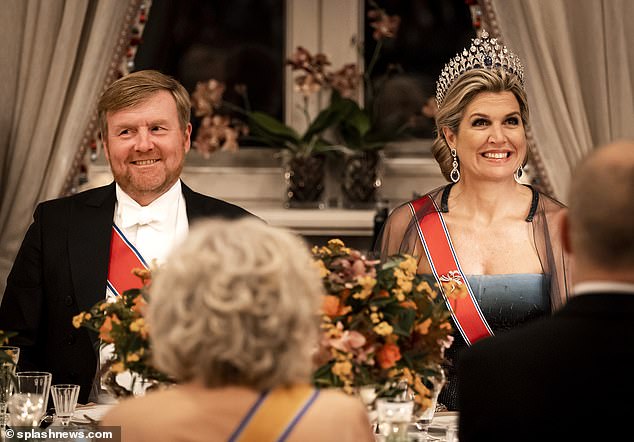 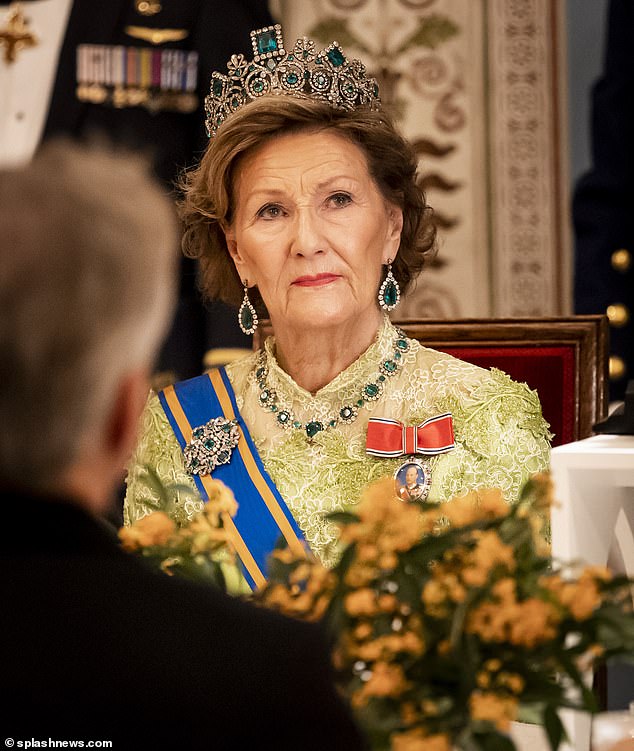 Queen Sonja joined her husband, King Harald, in welcoming the royal couple from the Netherlands

He walked into the event arm-in-arm with Queen Sonja, who opted for a vibrant lime green floor length gown for the occasion.

And Princess Martha Louise, the only daughter and elder child of King Harald V and Queen Sonja, wore a lilac off-the-shoulder dress.

The royal visit started earlier on in the day despite the rain and their majesties were greeted by the public including children from a Dutch school in Oslo. 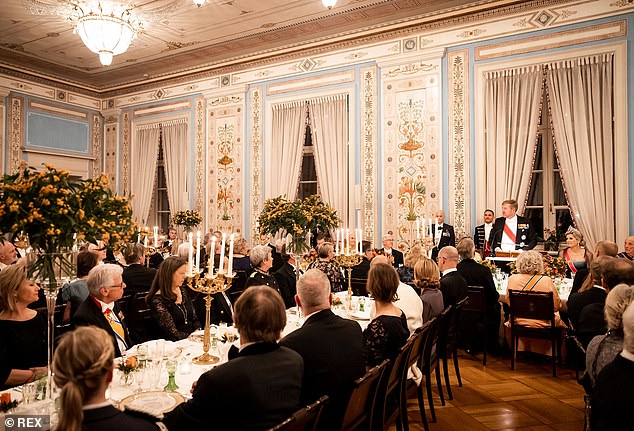 The mother-of-three and her husband were earlier spotted stepping off the plane at Oslo Gardermoen airport as they prepared to undertake a whirlwind state visit to the country at the invitation of King Harald of Norway.

Proving her fashion prowess, Maxima put on a stylish display in a stunning emerald green silk gown and completed her outfit with dangling earrings, beige pointed stiletto heels and a pair of chic gloves.

The Dutch royals could be seen posing alongside Norway’s King Harald and Queen Sonja for an official photograph during a welcoming ceremony at Slottsplassen, in Oslo.

Queen Maxima’s locks were styled in an elegant up-do tucked underneath a dainty beige hat, which perfectly coordinated with her accessories. 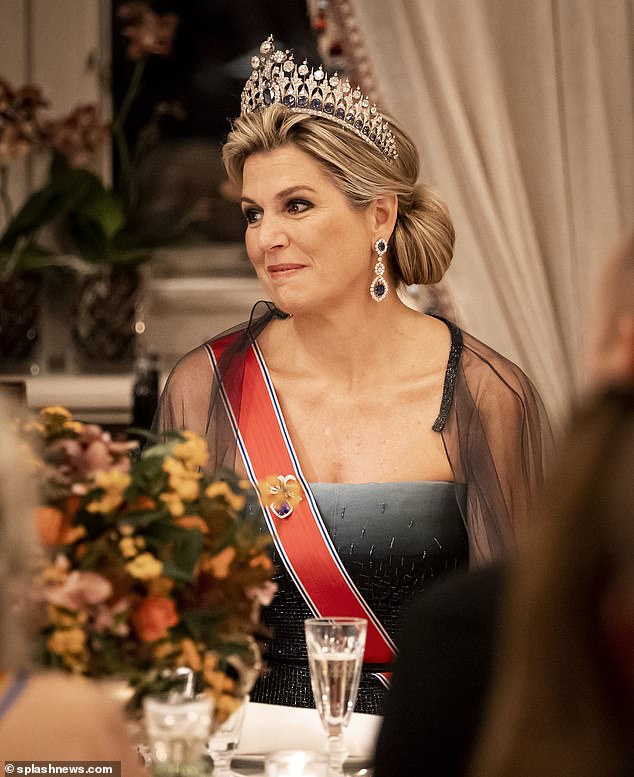 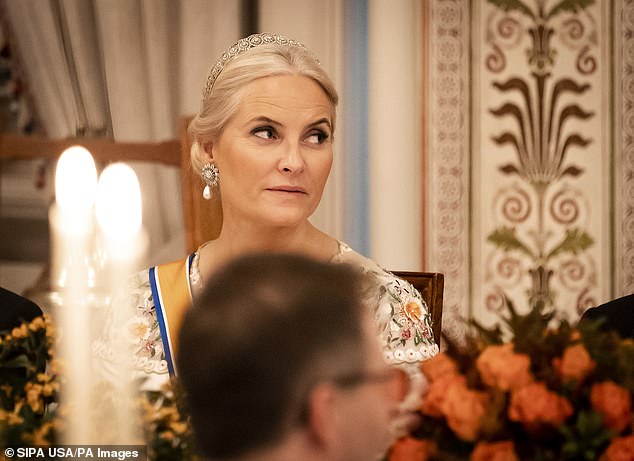 The natural beauty, who kept her makeup subtle, opted for a light dusting of blusher and a layering of mascara for the occasion, and was seen sheltering from the rain underneath an umbrella.

Later, Queen Maxima and her husband attended a wreath laying ceremony at the national monument at Akershus Fortress.

The Dutch royals, who were received by Norway’s Queen Sonja and Crown Princess Mette-Marit, will visit Oslo and Trondheim during their whistle-stop top, which will take place from 9-11 November. 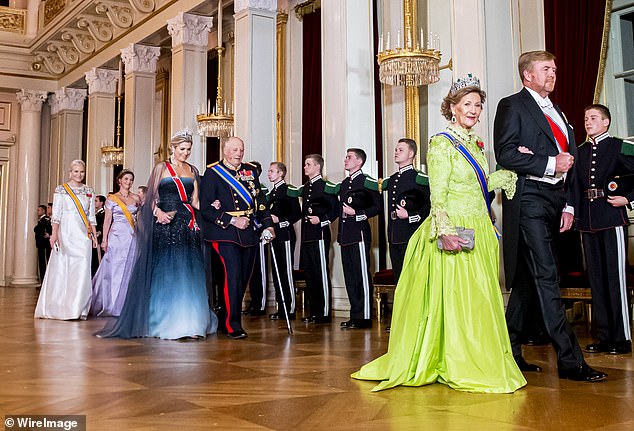 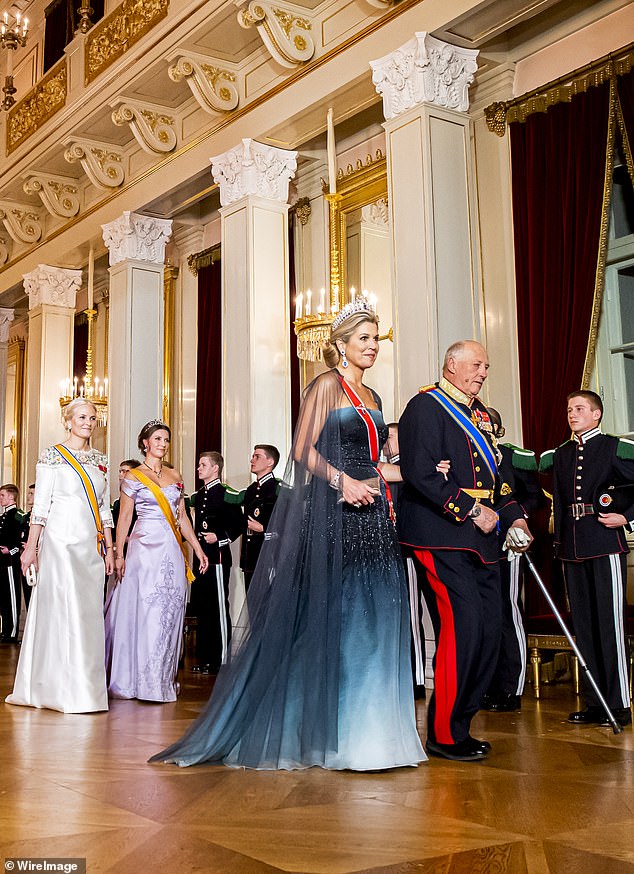 According to the Dutch Royal House, the state visit will affirm ‘the outstanding relations between Norway and the Netherlands.

The main themes of the visit will be bilateral and international cooperation, climate change, the energy transition and sustainability.’

It will mark the second outgoing state visit by King Willem-Alexander and Queen Maxima in 2021 after they visited Germany in July for a three-day trip that was delayed from last year due to Covid-19.

It’s been a busy few weeks for the Dutch royals, who returned from their trip to the Middle East last week to visit the Expo 2020 Dubai.

It is the first state visit to Norway since the pandemic began, though Crown Prince Haakon did undertake a virtual visit to California in April to discuss ways of collaborating on green initiatives and sustainability.