Victorian Greens leader Samantha Ratnam hopes her party will double its seats in the lower house at Saturday’s state election, putting it in a strong position to push its agenda if there is a hung parliament.

Richmond, Northcote and Albert Park in Melbourne’s inner-suburbs are the party’s biggest chance of increasing its lower house seats, on top of the three it already holds in Melbourne, Prahran and Brunswick. 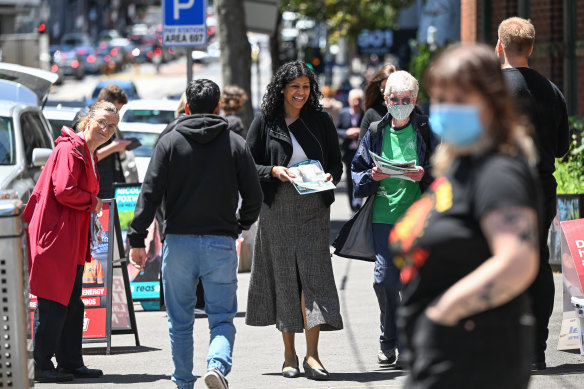 The Greens had been hopeful of securing the balance of power at the 2018 election, when a tight outcome was predicted, but went backwards in the “Danslide”.

Ratnam said Saturday’s results would not be a repeat of the 2018 election – which was beset with controversy and cost the party the seat of Northcote, and four of its five upper house seats because of the group voting system.

“I’m very proud of our Greens campaign,” said Ratnam, who represents the Greens in the upper house Northern Metro region.

The party believes it can capitalise on the trend away from major parties, which boosted the Greens vote at the May federal election.

The Liberal Party has also placed Labor last, behind the Greens, on its how-to-vote cards, which could make the difference in hard-fought contests between Labor and the Greens.

Polls have consistently put Premier Daniel Andrews in an election-winning position, but the Resolve Strategic survey for The Age this week said a minority Labor government was increasingly possible.

That would require Labor to lose at least 11 seats. The poll found statewide support for the Greens slipped from 12 to 10 per cent since the start of the campaign, but 28 per cent of voters indicated they would support a minor party or independent.

“The Liberals can’t win,” Ratnam told reporters outside an early voting booth on Friday, a day before polls close. “We want to help form a really progressive parliament in the next Victorian parliament. If you want progressive reform in Victoria, you must vote Greens.”

The minor party last week released its demands of Andrews to ensure support from the Greens in the event of a hung parliament.

The Greens would seek to push Labor to cap rent increases in line with wages, raise the age of criminal responsibility from 10 to 14, halt native forest logging, ban onshore and offshore gas exploration, and beef up integrity powers.

Andrews has repeatedly affirmed his position that he would not enter into a deal with the Greens.

Lauren O’Dwyer is running for Labor, which extended its majority in Richmond to 5.8 per cent in 2018.

Labor’s Kat Theophanous won the seat of Northcote back from the Greens in the 2018 “Danslide” election, only a year after now-federal Senator Lidia Thorpe turned it Green at a 2017 by-election.

Theophanous on Friday said she was confident of retaining the seat. She is defending a 1.7 per cent margin in Northcote, which Andrews has visited three times during the campaign, demonstrating Labor’s doubt of holding on.

“We have not wasted a moment in Northcote getting things done,” Theophanous said, listing level crossings removed and schools upgraded under Labor in the last four years.

“I’m absolutely committed to being the MP for Northcote, come Sunday.”

Campbell Gome, a public school teacher, unionist and environmental campaigner is contesting for the Greens.

Labor has a strong 13.1 per cent margin in Albert Park, but the retirement of former health minister Martin Foley has opened the contest in the seat, which has been visited by Andrews and Prime Minister Anthony Albanese on the campaign trail.

Labor’s Nina Taylor, who moves from the upper house, is fighting a challenge from Greens candidate Kim Samiotis.

The Greens also put Pascoe Vale and Footscray on its radar, and Ratnam hopes to make those electorates marginal.

“We might get close,” Ratnam said. “We know a genuine political contest is really good for democracy; it means MPs, of any persuasion, have to actually pay attention to their communities.”