“So good to be back in our hometown,” says James Hunt, one third of Sydney-raised electronic group Rufus du Sol, a handful of songs into their set at The Domain on Friday. “I have a very good feeling about tonight.”

It would be hard not to feel good. Earlier, thousands rolled into The Domain as the sun set over the CBD. Then the fireworks start falling over Sydney Harbour before three figures clad in black – Hunt, vocalist Tyrone Lindqvist and Jon George on keys – emerge on elevated platforms through smoke and sweeping synths. 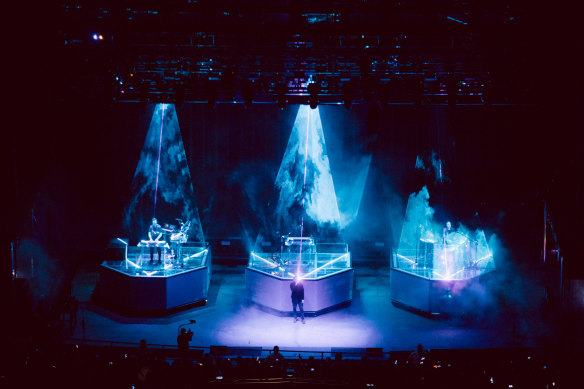 They could be forgiven for feeling like favourite sons returned. This is, after all, a homecoming for the trio, who now call Los Angeles home. Hunt reminisces on their early days playing staple Sydney venues, a rite of passage from Oxford Art Factory to their first gig at The Domain in front of “about 50 people”. Tonight, Lindqvist announces, it’s more like 25,000.

They waste no time launching into hits from Surrender, their latest album which has so far netted them an ARIA and nominations for two awards at the 2023 Grammys (the first single off the album, Alive, won a Grammy for best dance/electronic recording at the 2022 awards).

It’s not hard to see why the group has almost exclusively played outdoor venues on this tour, famous amphitheatres such as Colorado’s Red Rocks and California’s Hollywood Bowl which allow for the full expansive of their sound (think rolling blue skies and endless windswept beaches).

The first few songs here in The Domain make full use of the open-air venue, lights blasting across the city’s skyline into the night sky as the trio work through what is now an impressive back catalogue of synthy pop bangers. A Rufus set can feel predictable, with big builds and drops and songs which seem to roll over one other like waves in the shallows at Bronte, but it ultimately builds into nine perfect minutes of Innerbloom, arguably Rufus’ most enduring track.

“There’s no place I’d rather be,” Lindqvist sings as confetti rains over the crowd to round out the set. It’s euphoric, if slightly corny, visually striking and ultimately just good fun.

All very summer, all very Sydney.

Rufus du Sol play a second and final Sydney show at The Domain on Saturday, December 3.