Rush Limbaugh, the influential conservative radio host, has died from complications of lung cancer, his wife Kathryn announced on his radio show Wednesday. He was 70 years old.

“It is with profound sadness, I must share with you directly, that our beloved Rush, my wonderful husband, passed away this morning due to complications from lung cancer,” she said. “As so many of you know, losing a loved one is terribly difficult, even more so when that loved one is larger than life. Rush will forever be the greatest of all-time.”

“Despite being one of the most recognized powerful people in the world, Rush never let the success change his core or beliefs,” added Kathryn. “He was polite and respectful to everyone he met.”

Last February, Limbaugh broke the news of his cancer diagnosis to his listeners. “I can’t help but feel that I’m letting everybody down with this. But the upshot is that I have been diagnosed with advanced lung cancer,” he said at the time.

Just days later, former President Donald Trump awarded him with the Presidential Medal of Freedom, the country’s highest civilian honor. Mr. Trump thanked Limbaugh for his “decades of tireless devotion” to the nation. 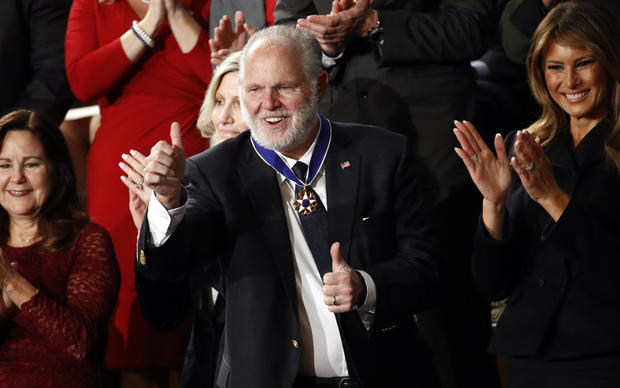 In 1988, Limbaugh began his self-titled radio show, which quickly rose to become one of the most popular conservative talk shows.

Limbaugh made headlines for his controversial comments and was routinely accused of bigotry, sexism and racism for his fiery remarks. Over the years, he offered various apologies for accusing Michael J. Fox of exaggerating his Parkinson’s symptoms, calling law school student Sandra Fluke a “slut” and “prostitute” and for promoting the false theory that former President Barack Obama was not born in the U.S.

In a 1991 interview with “60 Minutes,” Limbaugh acknowledged that others have called him both sexist and homophobic, which he denied. “I’m none of those things. I am simply someone who views events in life and comments on them. I have my own version of what’s right and wrong.”

This story is breaking. Please check back for updates.