SARAH VINE: Yes, I fell out with the Camerons. But their friend’s diary betrayal is unforgivable

Yesterday saw the latest instalment of Sasha Swire’s now not-so-secret Diary Of An MP’s Wife, and I found myself wondering who should host the forthcoming book launch.

Should it be me, with my famous fish pie-making skills — after all, I do have a tendency to ‘meddle’ in everything, says Sasha, and I am a willing skivvy?

Or perhaps David Cameron would prefer to do it on the off chance that she might finally let him ‘give her one in the bushes’ afterwards. Maybe it should be George Osborne — or ‘Boy George’ as Sasha likes to refer to the former Chancellor. It’s just the sort of thing that might appeal to his ‘sh**-stirring’ nature.

Or could the Duchess of Cornwall be persuaded? After all, when talking to her, ‘it’s as if she’s always got the end of a fag sticking out of the corner of her mouth and a gin and tonic clinking in her hand’. Ideal for a party, wouldn’t you say?

I jest, of course. Judging by the various conversations I’ve had over the past few days with old acquaintances about her jottings, poor Sasha and her husband Hugo, may find themselves on an extended holiday in social Siberia. 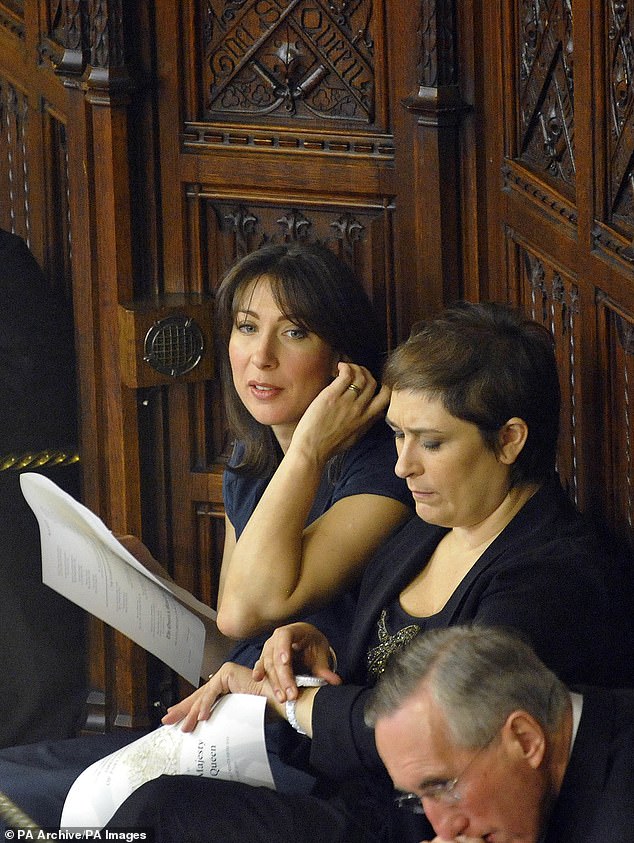 Samantha Cameron (left) and Michael Gove’s wife, Sarah Vine, ( right) during the State Opening of Parliament of Palaces of Westminster

Because the diary — covering the days of the Cameron-led Coalition, when Hugo was Northern Ireland Minister — could not be more wantonly indiscreet. (It was on a country walk in Cornwall 2011, Sasha claims, that Dave said he wanted to drag her into the bushes.)

Perhaps the Camerons and their circle won’t mind one bit that someone they thought of as a confidante was, in fact, taking notes all along; squirreling away all those juicy anecdotes for future use.

Perhaps they’ll all be back at the Camerons’ place in Cornwall in time for the weekend, revisiting Dave’s ‘teenage snogging haunts’ (he pointed them out on a walk) and indulging in a spot of competitive bodysurfing with Harry Enfield.

Then again, perhaps not.

There is something about the sheer chutzpah of this memoir that rather makes me hope she gets away with it. Like Alan Clark and Henry ‘Chips’ Channon before her (the latter of whom’s own account of life as an MP during the inter- war years was published nine years after his death — and even then had to be heavily redacted), there’s no doubt that Sasha has a brilliant eye for an anecdote.

And I must confess I rather enjoy her breezy, unself-conscious style: there aren’t many MPs’ wives who would dare describe the party’s foot soldiers as ‘toilet seats’.

But I don’t think she’ll be forgiven, certainly not for a while. Not least because as someone who was also on the sidelines during those years, I believe that not only is her account deeply disloyal, it also fails to tell the whole story.

It’s a bit like someone writing an account of Winston Churchill during the war years, and only ever mentioning the cigars and the Pol Roger; or reducing H. H. Asquith to nothing more than a besotted drunk, penning love letters to Venetia Stanley during Cabinet meetings; or characterising Gordon Brown simply as a phone-throwing maniac. 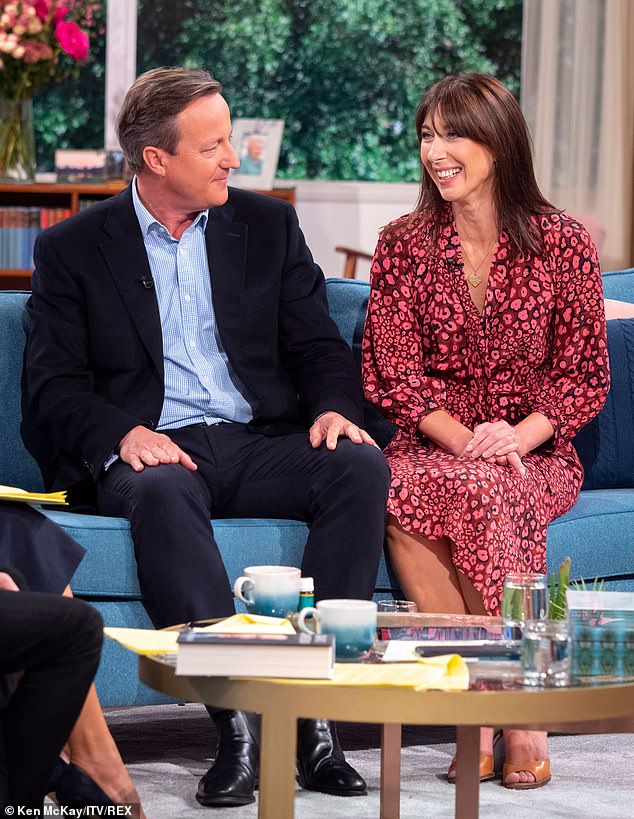 These are all, it’s true, juicy anecdotes. But they don’t offer a fair assessment of the characters involved. Instead, they reduce them to one-dimensional puppets, defined by fleeting snapshots that fail to capture the real them.

Because the truth is that Sasha only really saw the Camerons — and, in particular, Dave — in off-duty mode; when his guard was down and he was intent on letting off a bit of steam with someone he clearly thought he could trust. Which must make her book all the more hurtful to them.

A case in point is a passage in this latest extract where she writes about a heated exchange between me and Samantha at a mutual friend’s 50th birthday.

‘It all goes wrong when Sarah [Gove] and Sam [Cameron], fur flying, have a set-to at the party, with everyone watching and listening in. When the wives get nasty, you know the men have a problem,’ she writes.

It’s true: Samantha and I really did have an argument that night — over Brexit, the first and last time we ever exchanged cross words. Tensions were high over the referendum, and, although neither of us perhaps quite realised it at the time, the fabric of our world was being torn apart.

We were both at the end of our tethers and needed to have it out. If we had known someone was taking notes, we might have been more circumspect. And this goes to the heart of why this book represents such a betrayal: despite my friendship with Samantha, I knew there were always things she didn’t — or couldn’t — tell me, purely because she was wary of my professional status as a journalist.

But with Sasha that was not the case. She was absolutely 100 per cent in the box marked ‘old friend’, and as a result the Camerons were completely uncensored with her. 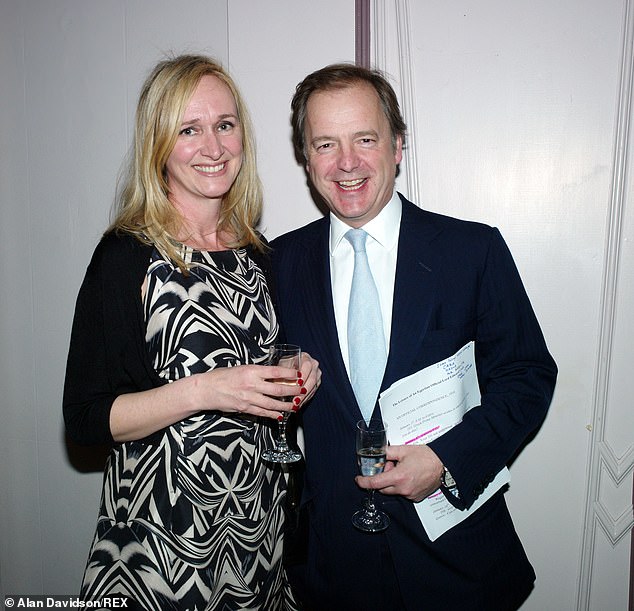 Hugo Swire (right) and his wife Sasha, (left),  writer of ‘Diary of an MP’s Wife: Inside and Outside Power’

Swire herself acknowledges this. On the morning after the referendum, she wakes her husband, telling him ‘we need to get back to London to prop up Dave’.

(Tip: if you want to prop up a friend in crisis, maybe best not to write a diary making him look like a cross between Benny Hill and Tim Nice-But-Dim.)

Because, let’s face it, the Cameron of this memoir comes across as a bit of a bumptious fool. He’s either planning to get drunk or getting drunk, he’s obsessed with sex and has a sense of humour that would make a schoolboy blush.

‘Golf at 7.30am, 11am staged photoshoot at Port Isaac to get the hacks off our backs, boozy barbecue on the beach, pulling tummies in for the paps that are still lurking behind rocks and hiding leftover foie gras canapés, cold-water swim, kip, surfing at 7pm, dinner, flop,’ she writes of their stay in Cornwall. Statesmanlike it’s not.

But then, if you only see someone when they’re letting off steam, you get a skewed impression. PMs and Chancellors are dealing with incredibly hard decisions on a daily basis, the kind that would make most of us never want to leave our rooms.

These moments that Swire describes are, for all their absurdity, rare moments of relaxation, but they certainly don’t capture the whole man.

Don’t get me wrong, I have no axe to grind for Cameron — I haven’t spoken to him properly since before the referendum. But I do believe in fairness, and this portrayal of him as indulging the whole time in an endless round of ridiculous Sloaney parties is not fair. Dave had — and has — many qualities besides being able to mix a mean Negroni.

As for Samantha, the idea that she was only ever interested in dresses and getting her hair done is nonsense. While the revelation about Dave apparently recoiling ‘from her gin-sodden breath’ on the day he tendered his resignation as Prime Minister is, frankly, just mean. Samantha may have knocked back a little liquor on that occasion but hardly drinks at all, save for the occasional lager.

The David Cameron I knew, especially in the early years of his premiership when it was still possible to bypass the No 10 machine, was well-read, a good listener and someone who empathised and felt things deeply. Yes, he enjoyed a glass of wine and listening to music (The Clash being a favourite). But he only ever did those things off-duty. The rest of the time he was deadly serious.

His patience and love for his severely disabled son Ivan was extraordinary. He was an exemplary father to that child and unfailingly supportive of Samantha. Many men would not have so readily engaged with the situation, or been so tirelessly hands-on.

He was dogged, a do-er. But also a pragmatist, one who always did his best to see everyone’s point of view but who, in the end, was not afraid to assume responsibility for making hard decisions.

He made mistakes, of course. All Prime Ministers do. But perhaps in this case his real mistake was, ultimately, trusting someone too much.