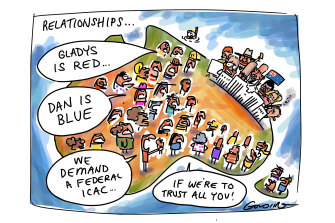 To submit a letter to The Age, email [email protected] Please include your home address and telephone number.

Seeing is believing …
Margaret Simons’ excellent article (‘‘Questions of our own’’, The Sunday Age, 11/10) analysing the relationship between the Premier, journalists and the public, missed one key point: the reason the support for the Premier and the government in Victoria has remained high is we, the public, can hear up-to-date information and make our own evaluations.

Unlike any other circumstance, most of us have been home, have the time to hear the highly rating press conferences and to evaluate the information. Unlike more regular news we did not need the interpretation of news by journalists.

The level of support for the Victorian government, albeit dropping, would not be as it is if the tenor of articles in news feeds were our source of Victoria’s COVID-19 news.
Jenni King, Camberwell

... but it’s time to ease up
The drawbacks of the ‘‘performance’’ journalism we see daily in the Premier’s press conferences have been analysed in a persuasive article by Margaret Simons. Mentioning that journalists have been criticised for either hectoring Andrews or not cross-examining him enough, she concludes that we the public ultimately learn nothing more than what is intended, consuming the journalism rather than its content.

Here is a solution that would make us all winners. Journalists could stop attending these briefings or at the very least keep things brief, and use their time to investigate and report on salient issues and the Premier could update everyone on the COVID-19 details including daily statistics in a press release.

This would free up a considerable chunk of the Premier’s time to focus on managing Victoria through this pandemic in a competent, transparent and accountable manner. No one would argue that he doesn’t have plenty to do, starting with re-organising his own department and restoring cabinet processes.
Sidra de Zoysa, Glen Iris

On the one hand it will mean lost income, but on the other hand it will give Australia the opportunity to finally do something effective about the Murray-Darling Basin and the environmental and financial damage caused by us growing cotton in the area.

Any cost benefit analysis would show that the $2.5 billion earned from cotton exports – most of it from China – is a tiny proportion of the cost of saving the Murray-Darling Basin and the social, economic and environmental benefits that would bring.

The NSW Shooters, Fishers and Farmers Party would celebrate; Coalition-linked agribusiness owners would miss out on scandalous water buybacks; and, downriver communities would be ecstatic.
Noel Turnbull, Port Melbourne

A failure to prepare
If a normal hospital like Box Hill has an outbreak of COVID-19, then what hope is there for our hotels. It is glaringly obvious that we need special quarantine hospitals and centres around Australia if we are going to cope with this and future pandemics.

The ADF, police and private security firms should not be expected to be responsible for quarantine in our hotels. Governments of all persuasions have been lazy and negligent in not providing us with the facilities and tools to fight this or any other pandemic.

We continue to spend billions of dollars on upgrading weapons of war but when it comes to a hidden enemy like a deadly virus, very little has been spent comparatively.
Paul Chivers, Box Hill North

It’s costing our future
It is clearer than daylight now that social media has become one of our major ways to establish connections with others.

As our needs of commenting, posting, and liking images grow day by day, we are feeding our longing for significance in the virtual social network to our addictions of social media. However, only a handful of people realise that social media is driving us away from realising the importance of real-life interactions (‘‘No doubt, it’s toxic’’, Letters, The Sunday Age, 11/10)

A study in 2016 reveals that as teenagers, the overuse of social media potentially decreases their ability to succeed in relationships later in life. Due to excessive communication being done online, insufficient face-to-face interactions hinder the development of their skills to manage conflicts and awareness of interpersonal cues. Social media is costing our future, and we should be alarmed.

Start by putting down your phone and chatting with others, it is as easy as that.
Emmy Xie, Coburg

On Saturday, I was confronted by a young male not wearing a mask walking towards me. When I suggested that he should be wearing a mask, his response was, “Don’t you know, there were only two cases today.” Says it all really.
Edward Combes, Wheelers Hill

We depend on hope
Hats off to Wendy Squires for admitting that she is struggling to cope with a prolonged lockdown (‘‘Dan: Something has to give’’, Comment, The Age, 17/10).

She writes so eloquently of her contracting world and the increasing dangers posed by seclusion and isolation, not just for her, but for so many others.

Her plea to Premier Daniel Andrews, in view of the spike in mental health problems is absolutely justified. Normal lives depend on hope, and without it, mental anguish and severe depression will continue to affect many.
Helen Scheller, Benalla

Note from the Editor