Sydney property values have tumbled more than 10 per cent since the market peaked, new figures show, while values in Melbourne and Brisbane have fallen more than 6 per cent and experts predict further falls ahead. 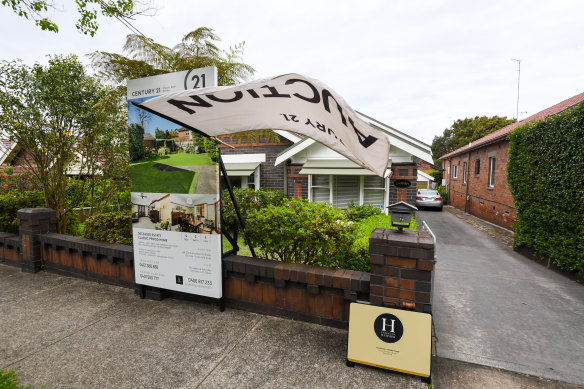 Sydney property values have fallen 10.1 per cent since the market peak in February.Credit:Peter Rae

Values in Melbourne have declined 6.4 per cent since the city’s January peak, CoreLogic’s daily home value index shows, while values in Brisbane have dropped 6.1 per cent since June.

Adelaide and Perth have both declined less than 1 per cent since their August peaks.

CoreLogic research director Tim Lawless said Sydney, the most expensive capital city, was the most susceptible to rising interest rates. Price falls began in February and sharply accelerated as rates climbed, down 9.5 per cent since the first rate hike in May.

“But it’s still a fairly rapid rate of decline and … I’m not expecting the market to level out until interest rates find a ceiling,” he said.

The figures come after documents released under Freedom of Information show the Reserve Bank expects prices to fall by 11 per cent nationally by late 2023.

The bank also modelled a downside housing price scenario, in which prices were tipped to fall 20 per cent by the end of 2024, assuming people became pessimistic about the outlook for house prices.

A decline of 20 per cent would be more in line with the predictions from the major banks, which have pencilled in peak-to-trough declines of 15 to almost 20 per cent.

What are the big banks forecasting?

Westpac senior economist Matthew Hassan said the Sydney correction is just past its half-way point and likely to continue next year.

While price declines had been rapid, Hassan said it was a demand-driven correction — as higher rates reduced buyer borrowing and spending power — rather than a distress-driven price correction, caused by a sudden shift in investor activity, oversupply or forced sales.

“But the day we get even the vaguest hint that the RBA is done with policy tightening you might see confidence come out of the woodwork pretty quickly.”

NAB chief economist Alan Oster has forecast a peak-to-trough decline of around 20 per cent, and falls of more than 20 per cent in Sydney, Melbourne and Brisbane.

However, he noted the projections were based on an interest rate peak of 3.1 per cent, and that prices could fall much further if the cash rate was to top 4 per cent, as markets are expecting.

Rising interest rates hit Sydney and Melbourne first, Oster said, but all markets would be affected.

“It’s basically like a tide, it either strands all boats or sinks all boats, and at the moment it’s sinking all the boats,” he said.

Most Viewed in Property