A group of chief investment officers collectively managing $620 billion of superannuation savings warn policymakers are overreaching with proposed rules that could hand the government the power to block major investments by the funds.

Almost 20 executives from some of the biggest superannuation funds in the country, surveyed by the Australian Institute of Superannuation Trustees (AIST), say allowing the government to ban some investments could lead to lower returns on workers’ retirement balances. 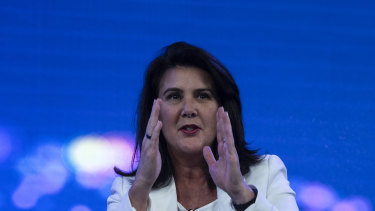 Superannuation Minister Jane Hume says the government is determined to implement the reforms to hold underperforming funds to account and ensure the system works better.Credit:Louise Kennerley

The Your Future Your Super reforms, unveiled in the 2020 federal budget, aim to improve the efficiency of the $3 trillion super system. Proposed measures include “stapling” workers to their fund, so duplicate accounts are not as easily created and eroded by fees, and imposing performance benchmark tests on investment returns.

While the sector has been generally supportive of initiatives to improve the sector, there is widespread opposition to several of the proposed changes, including giving the government the power to block investments or expenditure.

The government says this regulation-making power will not stop an individual fund from making a specific investment but instead relates to broader types of investments that are not in members’ interests.

Several Coalition MPs have been critical of super funds spending too much of members’ money on marketing campaigns, which they say are too often used to fight against government policies. However, the industry super funds say this spending is in workers’ best interests as it helps educate them and get the benefits of scale, reducing other costs overall for members.

Some marketing campaigns could fall into this category, but Labor, lobby groups and super funds are concerned the changes could see investment decisions blocked for ideological reasons.

Almost 90 per cent of the 19 top investment executives surveyed by the AIST thought the changes would affect their investment decisions, while two-thirds said they would hurt members’ returns.

The full list of funds surveyed has not been released, but the peak representative body said it included chief investment officers from five of the nation’s largest funds, representing 9.6 million super members.

Damien Graham, the CIO of Australia’s second-largest fund, Aware Super, who was one of those surveyed, said the draft legislation “may reduce the ability for funds to invest for the long term and that may result in lower returns for our members and have a negative impact on their retirement savings”.

“We have real concerns that there are no checks and balances as to what may or may not be covered under these prohibition rules, which is an incredible overreach and could have serious implications for how we invest and support our members to feel confident and comfortable in their retirement,” Mr Graham said.

HESTA chief executive Debby Blakey was supportive of reform that strengthened the system but expressed concern about these changes.

Superannuation Minister Jane Hume said the government was determined to implement the reforms to hold underperforming funds to account and ensure the system worked better.

“It is not surprising that a number of superannuation funds want to continue to put their interests ahead of their members as evidenced by their thinly disguised attempts to undermine the government’s reforms,” she said. On estimates provided by Senator Hume, measures in the package to increase accountability and transparency would save members $1.1 billion over 10 years.

Initial submissions were made by the industry to Treasury last year, with a second round to the Senate standing committees on economics closing on Thursday. A final report is due by April 22.

Industry Super Australia’s first submission warned the bill “enables the regulations to prohibit payments or investments which would otherwise be in the best financial interest of members” and this measure should be removed. “This is an extraordinary intervention in the market and limit on the proper discretionary duties of trustees.”

IFM Investors said the changes were “not proportionate nor justified and are likely to increase costs and legal uncertainty for trustees” while REST said the potential for investments to be prohibited was “particularly concerning … there is risk that this may be used for political purposes in the future”.

Labor superannuation spokesman Stephen Jones, who has written to major business groups warning about the risks of the government having the ability to block specific investments, criticised it as a “massive overreach” and an “extraordinary” push.