Triple X is a knockout. Written and starring the New York-based Glace Chase, the play has taken several years and multiple false starts to get to the stage, but now it’s here, punching hard.

Glace Chase makes no secret of the fact this story is taken from life, her life. As she says, “most of the most heartfelt lines are taken verbatim … they’ve been said to or by me”.

Knowing this makes her performance all the more powerful, and not just because she is drawing from her experience. Triple X becomes almost like an exorcism, a public ritual to witness and share a truth which we know but rarely acknowledge; that love and sex and gender and attraction and identity and life are beyond classification.

The truth is messy, confronting, frequently hilarious, and ultimately tragic. So is Triple X.

Scott loves a good rom-com: a few pratfalls, a cheesy love story. When we meet him, relaxing with his best friend in a palatial loft apartment in New York on the night before his wedding, a happy ending seems well within his grasp. 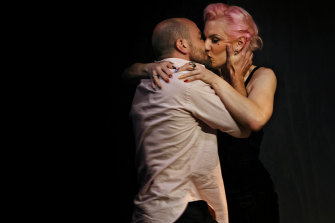 But when news reaches them of a shooting in Candyland, a downtown drag joint, everything starts to unravel. It turns out that Scott has a deep and unresolved relationship with Dexie, a trans woman who performs there regularly.

Triple X is a beautifully constructed piece of storytelling, a long night threaded with flashbacks and music numbers that gradually reveal how every character is complicit in Scott’s big lie.

Chase writes razor-sharp dialogue shot through with throwaway comments that send you scrambling to the bin. She even writes good bad jokes. And her all-singing, all-dancing, all-f—ing physical presence is a triumph.

That said, Triple X is by no means a one-woman show. Chase weaves together five lives into one ensemble where every character gets a showstopping moment. 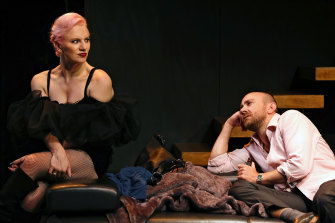 Glace Chase’s Triple X is based on her life experiences. Credit:Prudence Upton

First and foremost, there’s Scott, played by Josh McConville with a fearless and startling vulnerability that leaves one breathless. Then there’s Jase, Scott’s louche but lovable best man (played on opening night by Anthony Taufa, standing in for Elijah Williams).

There’s Scott’s sister, Claire (Contessa Treffone), a loud proud lesbian initially enchanted by her brother’s affair. And there’s their mother Deb, a febrile, fizzing Christen O’Leary, who brings the house down in a climactic – in every sense of the word – scene, where she is an accidental witness to Scott and Dexie’s loud and virtuosic love-making.

Deb’s tormented expressions upstairs, played in parallel with the ecstasy below, mirror the audience’s experience of coming face-to-face with a radical truth. It’s not exactly comfortable viewing, but you cannot look away.

In her program note, Chase hints that this may not be the end of the story. If that means we might hear more about Scott and Dexie, and experience more of Chase’s tough and brilliant storytelling, then that is good news indeed.