Taxpayers will foot the legal costs for former prime minister Scott Morrison to appear before the robo-debt royal commission after Attorney-General Mark Dreyfus agreed to fund expenses for a slew of Coalition figures to face the inquiry.

In documents tabled in the Senate on Wednesday, Dreyfus said it was appropriate to provide financial assistance for Morrison given the inquiry related to his former duties as social services minister overseeing the creation of the scheme, as well as his roles as treasurer and prime minister. 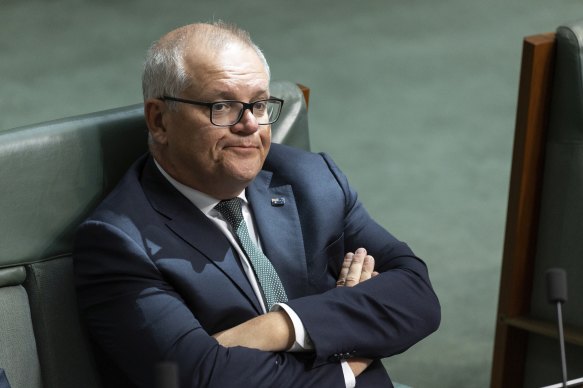 Former prime minister Scott Morrison will have his legal expenses for any appearance before the Robodebt royal commission footed by the taxpayer.Credit:Alex Ellinghausen

Former ministers Alan Tudge, Michael Keenan, Stuart Robert, Christian Porter and Marise Payne will also have expenses covered by taxpayers, but the approval of the public money does not cement their appearance at future hearings, which begin again next month.

The robo-debt scheme was launched in 2015 with the aim of clawing back $750 million from nearly 400,000 Centrelink recipients it alleged owed the Commonwealth money.

The system took annual income data and averaged it over 26 fortnights, presuming income was the same across each, and put the onus on welfare recipients to disprove alleged debts.

In the first two weeks of its hearings, the commission heard from a roll-call of senior public servants speaking about the scheme, which was later found to be illegal.

The government settled a class action lawsuit in 2020 and paid more than a billion dollars in compensation. But it was too late for those whose families said took their own lives as a result of the scheme and their alleged debts.

Serena Wilson, a former DSS deputy secretary, gave evidence she felt “ashamed” at not having spoken up about the legal problems. She said detailed legal advice was provided to the Department of Human Services, now called Services Australia, before the program was rolled out.

But she believed this advice was not passed on to Morrison because there was some “role confusion” between the two departments. Wilson said she trusted DHS officers to pass on the legal advice to the minister, but in hindsight should have done more to ensure they did.

“When [the brief] was finally put to Minister Morrison, it shows repeated watering down of the quite specific and explicit information that [the Department of Social Services] had provided to DHS,” she said.

Legal problems were found to be “black and white” in 2014, according to one senior public servant, but the royal commission was also told of pressure coming from Morrison, who was then social services minister, to have the proposal submitted to the Department of Finance during 2015.