Australian taxpayers could face a multimillion-dollar compensation bill if the federal government forced a Chinese company to give up its ownership of the Port of Darwin.

The Sydney Morning Herald and The Age revealed on Monday the national security committee of cabinet had asked the Defence Department to review the Northern Territory’s 99-year lease of the port to Landbridge in 2015. 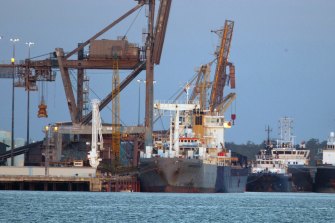 Defence is reviewing Landbridge’s ownership of the Port of Darwin.Credit:Glenn Campbell

This could result in the company, owned by Chinese billionaire Ye Cheng, having to divest the strategically important asset on national security grounds under critical infrastructure laws passed in 2018.

A costing undertaken by the Parliamentary Budget Office two years ago estimated the federal government would have to pay $30 million in compensation to Landbridge if it was required to give up the port.

The PBO analysis, done at the request of Labor senator Kimberley Kitching, was based on a proposal for the Commonwealth to buy the port itself. It said the government would also have to pay $690 million to purchase the remaining term of the lease but cautioned the costings were “highly uncertain” considering the lack of public information about the deal’s terms.

The $506 million deal giving Landbridge operational control of the port and 80 per cent ownership of the land and facilities of East Arm wharf including the marine supply base, angered Australia’s key military ally the United States and has unsettled national security figures in the federal government since it was signed six years ago.

Australia’s foreign investment rules were tightened in 2016 to require Foreign Investment Review Board approval for the sale of critical infrastructure such as ports to private companies.

In more recent years, relations between Canberra and Beijing have deteriorated to their worst state in decades, with China imposing more than $20 billion of tariffs on Australian exports following federal government decisions including banning Huawei from the local 5G network and pushing for an independent global coronavirus inquiry.

Defence Minister Peter Dutton confirmed his department had begun reviewing the Port of Darwin deal to provide advice to the national security committee.

Senior government sources said there was no proposal for the federal government to buy the port but conceded it might be liable to pay compensation if it forced Landbridge to offload the lease to another party. No decision has been made and Defence is expected to come back to the national security committee with options in the coming months.

Senator Kitching said the port was an asset that “should never have left Australian hands”. “When cabinet sits down to decide what to do about the Port of Darwin, the public will be expecting its actions to match its recently strong rhetoric,” she said.

Liberal MP Andrew Wallace said it was “absolutely madness” that the port was leased to the Chinese-based company.

“The Port of Darwin is absolutely critical infrastructure to the defence of Australia’s north and we should be doing everything we can to re-examine that decision,” he told Sky News.

John Blaxland, professor of international security and intelligence studies at the Australian National University, said the government needed to be careful not to further damage relations with China and suggested the risk of Landbridge continuing to operate the port could be mitigated.

“There may be material that I’m not privy to that makes a compelling case for not allowing its continuation,” he said. “We did this five years ago, we did it with our eyes open.

“It’s happened, we have mitigating strategies in place – there’s a heightened security awareness by the authorities and recognition of the risk.”