A mortified teen has claimed she and her boyfriend decided to get tattoos of each other’s names – only for him to backtrack and dump her by text just weeks after she got his initial inked on her bikini line.

Megan Carey, from from Wigan, Greater Manchester, was smitten with her boyfriend of around eight months when she claimed he agreed to include her name in his sleeve tattoo so she got her own tattoo, despite only just getting back together from a break.

The 19-year-old took the drastic step of getting the delicate design of a love heart going into the letter ‘J’ on her bikini line in mid August, thinking they would be together forever.

But two weeks later she claims she woke up to a break-up text out of the blue after the pair had started arguing again – leaving her deeply regretting the rash decision to get inked. 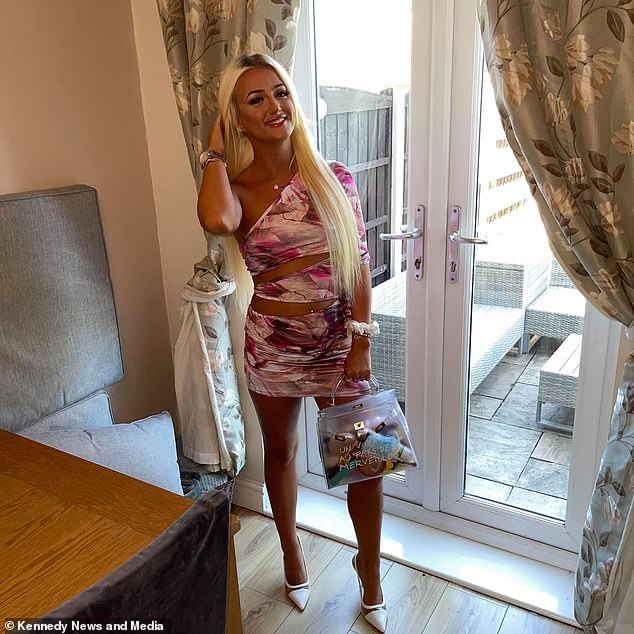 Megan Carey (pictured), from from Wigan, Greater Manchester, claimed she and her boyfriend decided to get tattoos of each other’s names 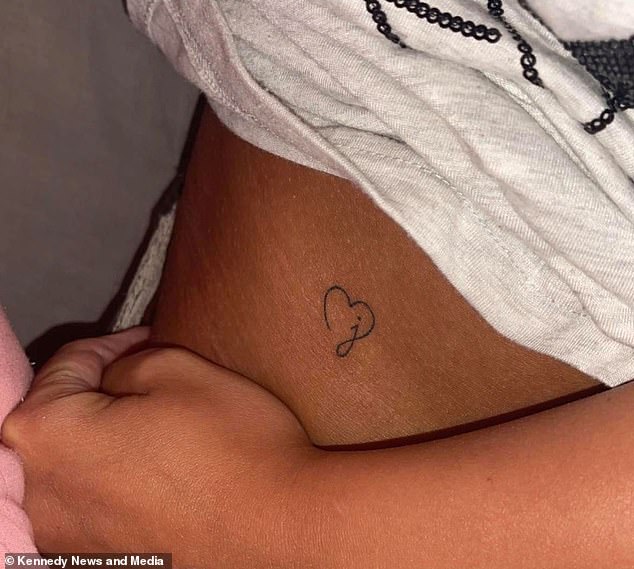 The accountancy student is now warning other young girls to never get a tattoo about a partner, insisting it’s a ‘waste of time’ and admitting even the tattoo artist had laughed at her, while pals had tried to talk her out of it.

‘The relationship was up and down from the beginning but after a break and getting back together I was pretty confident in the relationship,’ said Megan.

‘He was a bit older than me, 21, so I thought it was a more serious relationship. He was planning on having a sleeve tattoo done and I’d mentioned working my name into it and said I’d get one for him as well.

‘He was all up for it and said it would make him really happy so I got it done. But we started arguing and a few weeks later he went on a night out and I woke up at five o’clock in the morning to a text message of him breaking up with me. 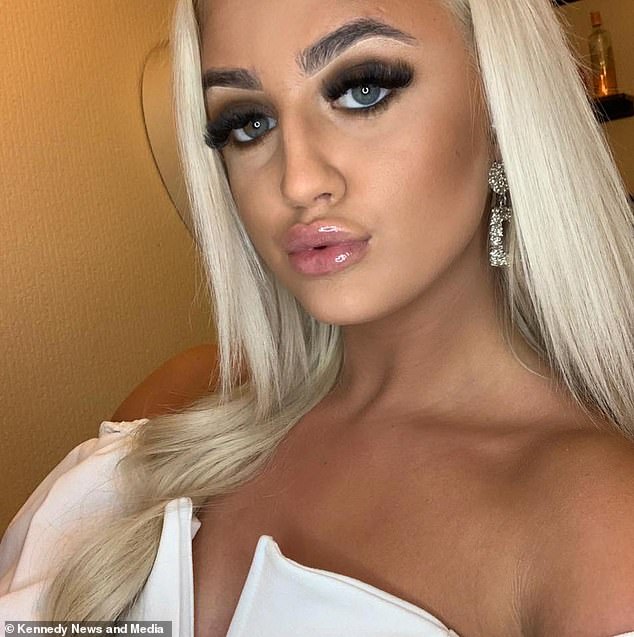 The 19-year-old (pictured) took the drastic step of getting the delicate design of a love heart going into the letter ‘J’ on her bikini line in mid August, thinking they would be together forever

‘I thought he would be messaging to let me know he was home but it actually said “I’m sorry Megan but we’re done, the arguing is draining”.

‘It came as a total shock. All I could do was laugh about the tattoo because otherwise I’d cry.’

The teen got into a relationship with her ex-boyfriend in November 2020 and the pair were together happily for seven months until June this year when cracks started to show.

Clashing schedules due to part time jobs over the summer break from university meant that the young couple struggled to spend much time together and started arguing a lot. 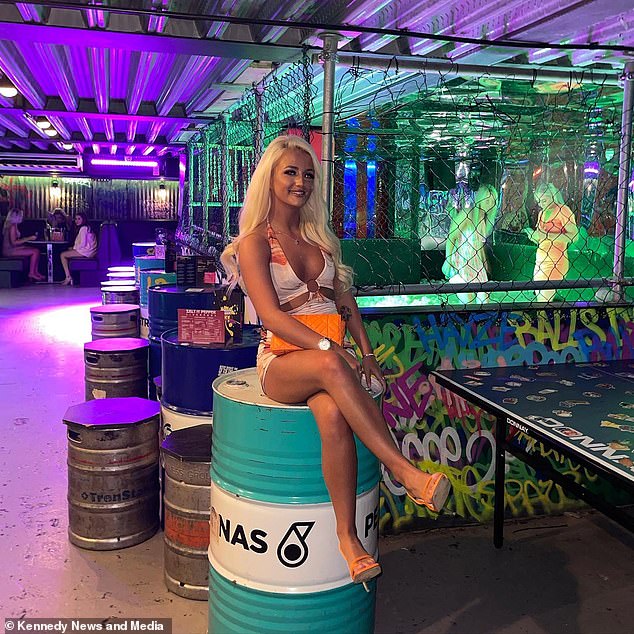 They ended up splitting up and going on a break for three weeks before deciding they wanted to make it work.

‘My friend was talking to a boy and they introduced me to my ex – I wasn’t interested at first,’ explained Megan. ‘It wasn’t until the third time we met months later that I finally gave him a chance and we got together.

‘The first few months we went through the honeymoon phase as most relationships do but after a bit we started to clash and argue a lot.

‘I got a part time job as a waitress over summer and it all went down[hill] from there – we saw each other a lot less because he was working in the day and I was working at the night.’

After getting back together in early July and being together for another month, Megan says the lovestruck couple began discussing getting tattoos of each other’s initials.

Megan took the bold step to go and get her boyfriend’s initial tattooed in mid August despite concerns from both her friends and the tattoo artist. 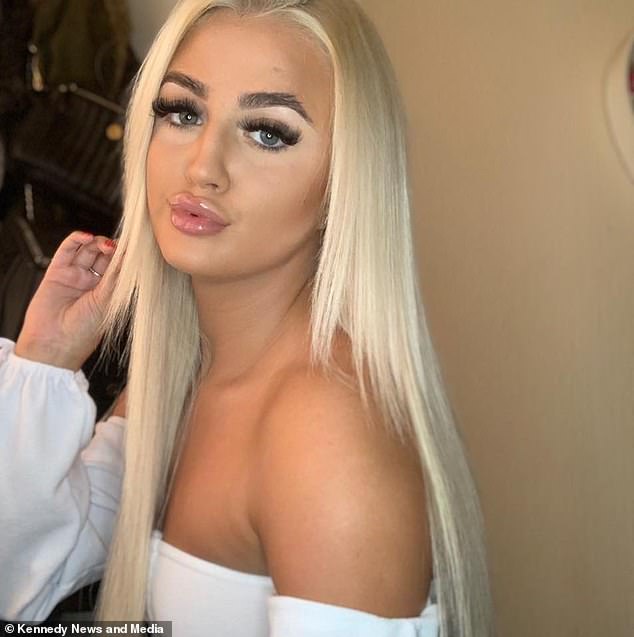 But by the end of August he had broken up with her before going through with getting her name tattooed on him.

Megan said: ‘When I messaged the tattoo artist to book in he sent laughing faces back to me and when I went to get it done he was taking the mick saying ‘what are you doing’.

‘He said he’d do it small enough to be covered easily – that should have been a red flag. He didn’t charge me for it in the end because it was so small.

‘My ex’s reaction wasn’t what I expected – he was really calm and didn’t seem that bothered and then we never spoke about it again. I thought maybe it was just the shock.

‘My friends thought I was an absolute idiot for getting it and said not to, I should’ve listened.’

The teen has now been left with an uncomfortable reminder of her past relationship which she plans on removing in the near future.

She hopes to warn others not to make the same mistake she did by getting a partner’s name or initial tattooed, especially at a young age.

‘Just knowing that I’ve still got his initial tattooed on me is the worst part. I regret getting it done 100 percent,’ explained Meghan. ‘I’m either going to get it covered up or lasered off, I haven’t decided yet.

‘To anyone thinking of getting a partner’s initial tattooed I would say don’t even bother, it’s a waste of time and not worth it.’