Tech giant Amazon is facing legal action from an Australian delivery driver who claims he was inexplicably sacked from his job by being locked out of the platform, in a fresh challenge to the gig economy model the government has vowed to overhaul.

Ousted Amazon Flex parcel courier Jatinderpal Singh has lodged a case with the Industrial Relations Commission of NSW to be reinstated onto the app used by the platform’s drivers, claiming he has received no response to numerous requests for information and has lost an income of $900 per week. 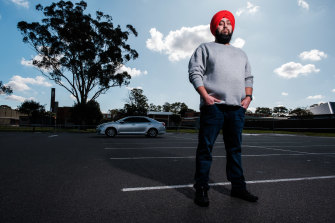 Jatinderpal Singh was an Amazon Flex courier and is now suing the online shopping giant for unfair dismissal.Credit:Oscar Colman

The Transport Workers’ Union, of which Singh is a member, is accusing Amazon of breaching the driver’s right to dispute resolution just months after Amazon Flex couriers in NSW won the right to receive a minimum rate of pay, in a landmark decision that gave them the same set of legal entitlements as other contract couriers in the state.

The union’s NSW and Queensland branch secretary Richard Olsen accused the company of behaving as though the law now didn’t apply to it. “At the first available opportunity, it’s unfairly terminated a driver without notice or reason despite a clear, industry-wide determination preventing it from doing so,” Olsen said.

The government has praised a recent agreement between Uber and the Transport Workers’ Union to back more regulation requiring the industry to give drivers and couriers a form of minimum wage and the right to appeal dismissals.

On-demand food platform Deliveroo is challenging a decision by the Fair Work Commission last year that found that one of its riders was technically an employee after he was booted off the platform for allegedly being late.

It is relying on a High Court decision this year that ruled two truck drivers who worked for the same business for 40 years were not employees, as they were dictated by the terms of the contract they signed.

Asked during an interview with ABC television on Sunday whether gig workers should be entitled to minimum rates of pay, Workplace Relations Minister Tony Burke replied: “they should all have minimum standards”.

Amazon Flex recruits car and van owners as independent contractors to courier goods in four-hour blocks. They previously fell outside the terms of the general carriers contract determination, due to the maximum weight they were allowed to haul, but the NSW industrial umpire extended the scheme in February to include them.

As well as giving Flex drivers a wage floor, the classification also legally enshrines access to dispute resolution, and the entitlement to keep performing their work while that is underway.

However, in a claim filed to the commission and seen by The Sydney Morning Herald and The Age, Singh alleged that after six months of working from the app, used to arrange deliveries, in early April he was locked out of the platform.

Singh claimed he immediately tried to contact Amazon by phone and email, but the attempts went unanswered. He alleged the only responses he received were automated replies from Amazon. The union also claims it sought to resolve the situation, but the company provided no reason for locking Singh out.

An Amazon spokesperson said the company wanted to be fair to its couriers while ensuring “we maintain a reliable and safe service”, adding drivers needed to attempt to deliver the parcels they were allocated.

“In those rare instances where delivery partners repeatedly fail to meet their obligations – for example, they repeatedly don’t deliver the parcels they’ve been allocated, repeatedly fail to turn up for delivery blocks they have committed to, or repeatedly cancel their blocks just prior to the start time – then they are no longer able to participate,” the spokesperson said.