An interview with Abida Parveen, one of the most famous singers you’ve probably never heard of, is almost like a sermon.

The 65-year-old’s voice fills the room, her gestures embrace her questioners. 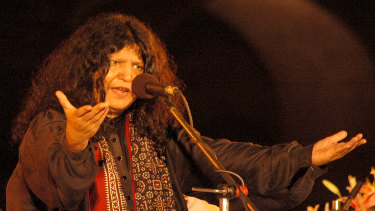 “I came to Sufi music as a music lover, really,” says Ben-Tovim.

As an Adelaide teenager she saw Sufi’s breakout star Nusrat Ali Khan perform at WOMADelaide and was transported. “I remember lying on the grass listening to this incredible music at midnight in the Botanic Gardens,” she says.

Then later, when living in India in 2011-12, she heard Parveen perform in Delhi at a Sufi festival staged in a stunning 12th-century Mughal tomb.

“Not only do I find Sufi stars and their music incredibly virtuosic, but they are also obviously channelling something which is so much more than music,” Ben-Tovim says. “It’s incredibly emotional, it’s very powerful, it’s otherworldly and transcendent and ecstatic.

“It’s not just watching her on stage, it’s watching the audience, for whom this is a big spiritual experience. With these artists, and Abida Parveen in particular, you know you’re in the presence of something really profound.”

At the same time, she says, there is an accessible nature to the music that doesn’t fence it off to one culture or religion but entrances any listener.

Ben-Tovim has been chasing Parveen for the best part of a decade, trying to bring her to Australia.

She would get regular, polite rejections. It was too far. Then, out of the blue, there came a suggestion it might happen. It took another year to pin the artist down, partly thanks to the enthusiasm and effort of co-curator Ayesha Bux.

Once the visit was confirmed, the pair went to Islamabad to visit the singer at her home.

“She’s actually a really down-to-earth and humble person,” says Ben-Tovim. “She and her family made a meal for us. We talked about my daughter who’s a similar age to her grandkids who were running around. It was a beautiful experience.”

But when they switched on the camera for an interview, Parveen transformed.

“She spoke about philosophy and spirituality; you’re in the presence of somebody who is a really profound spiritual person. It’s an amazing experience being in her presence.”

In that interview, a translated transcript of which was provided to The Age, Parveen says you do not need to understand the language – Farsi or Arabic – she sings in.

“It goes deep within you as you hear it … it enraptures you,” she says. “It’s a powerful frequency that reaches and binds you. Understanding it does not necessarily help. It makes its way into your heart.”

Parveen says that even at the height of her success there is still “restlessness within me”.

Sufi music, she says, “is in itself a form of prayer and devotion. It is a spiritual cure. Even as a child I loved listening to [it]. Even now I have to seek and ask. Nothing falls in my lap. When you stop learning the artist is finished. That restlessness is for learning.”

When wishes are fulfilled, she says, “nothing remains”.

The interview ends with a blessing.

“Every moment is a miracle of God,” she says.