Theatres across Sydney are gearing up for their busiest week since the COVID-19 lockdown as audiences cautiously return and restrictions on patron numbers are further relaxed.

Sydney Theatre Company (STC) and Belvoir Street Theatre have both been granted an exemption to raise audience numbers to 75pc after they made a joint application to NSW Health. 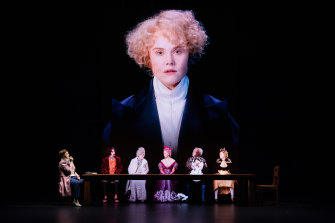 The new regulations on audience numbers have come just in time for STC to capitalise on the success of The Picture of Dorian Gray, starring Eryn Jean Norvill.Credit:Dan Boud

The development has been particularly welcomed by STC after The Picture of Dorian Gray, starring Eryn Jean Norvill, opened to rave reviews at Walsh Bay’s Roslyn Packer Theatre on the weekend.

Extra tickets for the one-woman show will go on sale from Tuesday.

STC executive director Patrick McIntyre said the relaxation was great news in what had been a “devastating year” for the theatre industry.

The exemption also comes in time for Belvoir’s much anticipated production of My Brilliant Career, which opens this weekend.

“Both Sydney Theatre Company and Belvoir have had shows running in Sydney since September without any mishap,” McIntyre said. “We are experiencing strong customer interest as well as really responsible behaviour in the theatre – people are taking the health and safety guidelines very seriously. I think we've built up some evidence and trust that we can run things safely.”

STC will be contacting customers who have already bought tickets to ensure they are comfortable with the lift in audience numbers from the current 50 per cent.

Musical theatre productions are also returning, with the city’s two major venues, the Capitol and Lyric, both opening blockbuster shows in time for Christmas. The Disney spectacular Frozen is in previews this week at the Capitol, while Pippin opens at the Lyric on Thursday.

Graeme Kearns chief executive officer of Foundation Theatres, which owns both venues, said the Capitol had been given an exemption to move to 85 per cent capacity, while the Lyric would be allowed to run at 75 per cent.

Among safety measures, audience members will be required to wear masks and encouraged to take their seats immediately. Bars will be open but patrons will have to take drinks to their seats rather than socialise in the foyer.

“Getting into the theatre and getting out will have changed a bit but it’s still the same awesome show experience,” Mr Kearns said.

“We're well on the road to 100 per cent but there isn’t a timeline – COVID doesn’t give you a timeline, it just gives you uncertainly. But most excitingly right now we've got 700 people working in and around around our theatres who were not working two months ago.”