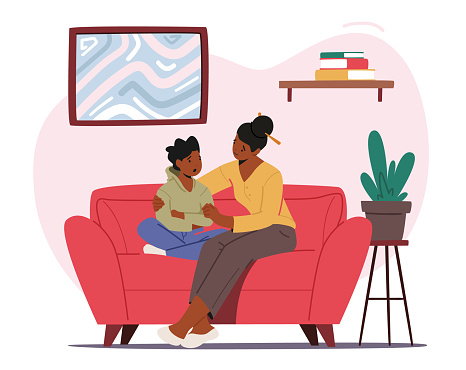 When I was reading about the Plymouth shootings, and the police’s consideration of the gunman’s links to the incel movement, I was struck by how little I knew about it.

I had read stories in the news, but wasn’t aware of how quickly the ideas were spreading, or that they were affecting people at such a young age.

I’m the mother of two young boys, Kush, nine, and Jaan, 11, and the growth of this subculture is frightening to me.

Laura Bates, author of the Everyday Sexism Project, warned earlier this year that online incel groups are targeting boys as young as 11, which already makes my children a potential target.

The term ‘incel’, or involuntary celibate, refers to men that desire sex but feel they have been denied it. Typically, they blame this on women. It’s a dangerous and misogynistic group that has been linked to killers such as Alek Minassian, who drove a van into pedestrians in Toronto in 2018.

It’s easy to brush it off and think, ‘this will never happen to my sons’. But in reality, parents often don’t know what their children are up to online.

I talk to my children regularly about what websites they visit and have parental controls set up to block inappropriate content, but I can never be fully aware of what they’re seeing, especially outside our home.

The growth of this movement is happening on platforms that children often have access to. Young people are watching more online videos than ever. According to a study by Qustodio, globally, children spent 30% more time watching YouTube in 2020 compared to 2019. Lockdowns and school closures have meant that screen time has inevitably risen.

Before, I thought this was a subculture that was only popular in the US and Canada. But, after researching further, I discovered that incel ideology is being discussed as a possible motivation for at least two UK terror trials. This, along with shooter Jake Davison killing his mother and four other people, means the threat feels much closer to home.

Hearing about the Plymouth shootings on the news, then conducting this research, made me want to learn more about what I can do to protect my children.

I’ve had similar conversations with parents who want to educate themselves and their families. As the CEO of a startup helping children become safer digital citizens, it’s one of the reasons why I co-founded my company in the first place: to equip parents with the skills, tools and knowledge to educate their children about online safety.

In a position like mine, I’m hyper-aware of the need for digital literacy in young children, so they know how to spot extremist beliefs on the internet. But I recommend that all parents take an active role in educating their children about this, too, so they can prevent their loved ones from being influenced by extremist content.

Radicalisation can be subtle at first. But it can gradually spiral out of control, with online content often sowing the seeds of future behaviour.

My boys spend lots of time on YouTube, which is balanced with other activities such as exercise. Pulling the plug isn’t the answer to preventing radicalisation, nor is assuming that they’ll be able to spot content by incels themselves, either.

The new relationships, sex and health education (RSHE) curriculum is being introduced in schools this year. A source close to Gavin Williamson, the education secretary, said teachers are being ‘encouraged’ to talk about incels in lessons, but this doesn’t go far enough. There isn’t a requirement to talk about this in class, meaning the burden of this education is passed on to parents and carers.

There was a 74-fold rise in investigations into right-wing extremist content by the Metropolitan Police’s Counter-Terrorism Internet Referral Unit between 2016 and 2020. This statistic was shocking to me and demonstrates just how fast this content is spreading.

Although radicalisation can happen offline as well as online, digital skills are key to safeguarding children from becoming influenced by incel beliefs.

There are many ways parents can educate their children. First, consider how you may talk to them about the topic in an age-appropriate way. Do you need to reference incels specifically yet? Or could you speak to them more broadly about online safety first?

Remember: every child is different and will have their own comfort levels.

For younger children in Key Stage 1 (aged five to seven), you may want to start with wider conversations about online safety. Ever since they’ve started using the internet, I’ve spoken to my children about what websites they visit and the kind of content they consume.

For children aged seven to 11 in Key Stage 2, if you think they are ready, talk through specific beliefs and terminology used by incels, where appropriate. Do your research and develop strong counterarguments. If you can point out flaws in the logic used by extremist groups, then you can delegitimise their beliefs.

Specifically, I’ve spoken to my children about how extremist culture spreads on social media. My boys are encouraged to talk about what content they view online, so we can discuss extremist ideas if they ever come across them.

I’ve also shown them how to report extremist views on platforms such as YouTube and other social media apps.

More generally, my advice is to set a good example and encourage children to be the kind of people who show empathy, kindness and respect in their internet interactions. By doing so, you can offer an alternative to the viciousness of online hate groups.

Having these conversations can also open up wider discussions about misogyny and how to treat women with respect. Earlier this year, the murder of Sarah Everard led to calls for people to ‘educate their sons’ about sexism – and this conversation needs to extend to their online behaviour, too.

Although I haven’t discussed Sarah Everard’s murder with my boys directly, as it isn’t age-appropriate, we’ve had wider discussions about misogyny. I reinforce our family values of gender equality and make them aware that not everyone in the world feels the same way.

We discuss how they may respond to misogynistic views and I teach them to call out all instances of extreme opinion that veers away from open-mindedness, respect and equality.

Some people may say that my children don’t need to be taught about these topics at such a young age. Radicalisation is an uncomfortable topic to address, and it can be difficult to navigate in an age-appropriate way.

But with children spending more time online, and extremist subcultures growing rapidly, I do not believe it is worth taking any risks.

Through education – in the classroom and at home – we can prevent more young boys from being radicalised by the incel movement.

For a new generation of digital natives, learning about online safety is essential to prevent atrocities like the Plymouth shootings from happening again.

To find child-friendly YouTubers and channels, as chosen by children, parents and e-safety experts, visit Natterhub’s Rate My YouTuber page.