Loo-sing it! Bizarre snaps reveal VERY badly-designed toilets – including a hole in a tree stump and cubicles that are not made for privacy

The weirdest toilets from around the world have been captured in a hilarious online gallery – and they range from the bizarre to the downright terrifying.

The snaps were first shared in a Facebook group called ‘Toilets With Threatening Auras,’  which was created by freelance filmmaker Phil Wilson, before being compiled in a list by BoredPanda.

From some loos that lack privacy to others that look like they could fall through the floor at any minute, these snaps will leave you wanting to go to the toilet in the comfort of your own home only.

Here, FEMAIL has shared some of the strangest, scariest, and wackiest toilets that exist on this earth… 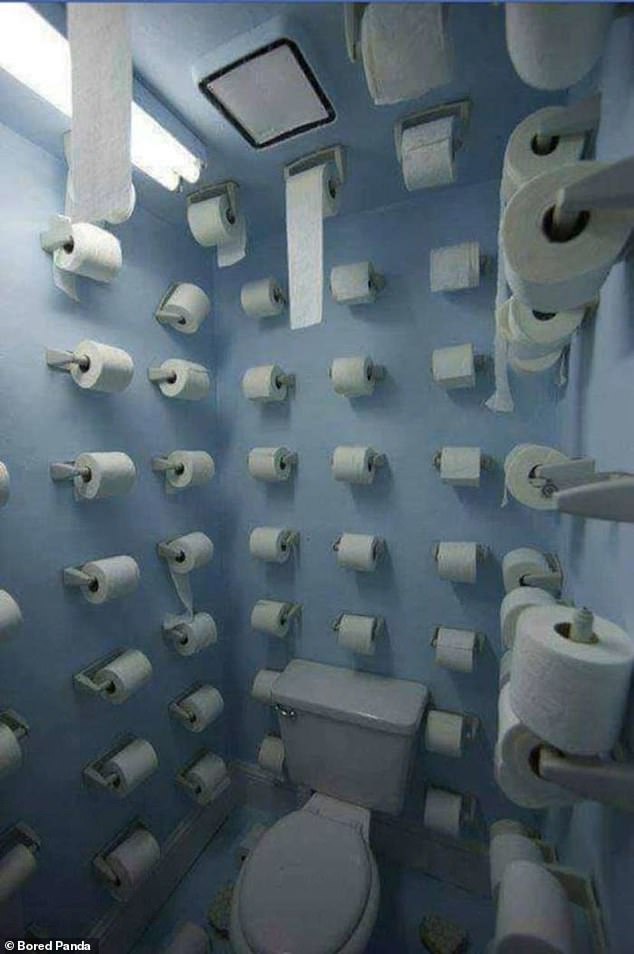 On a roll! There’s no needing to panic about running out of toilet paper as far as this loo is concerned! 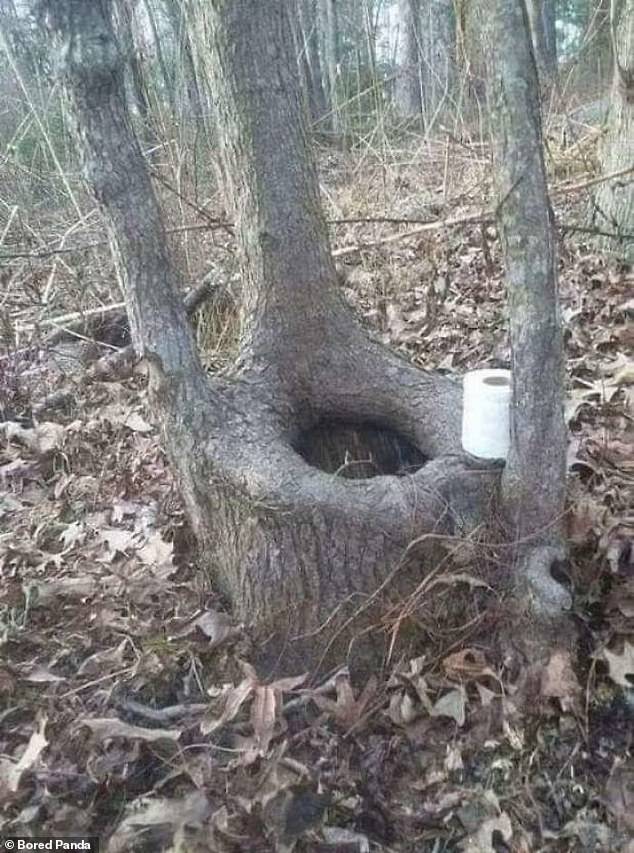 Not so tree-mendous! This makeshift toilet, pictured in an unknown location, is situated in a forest – and in full sight of passersby 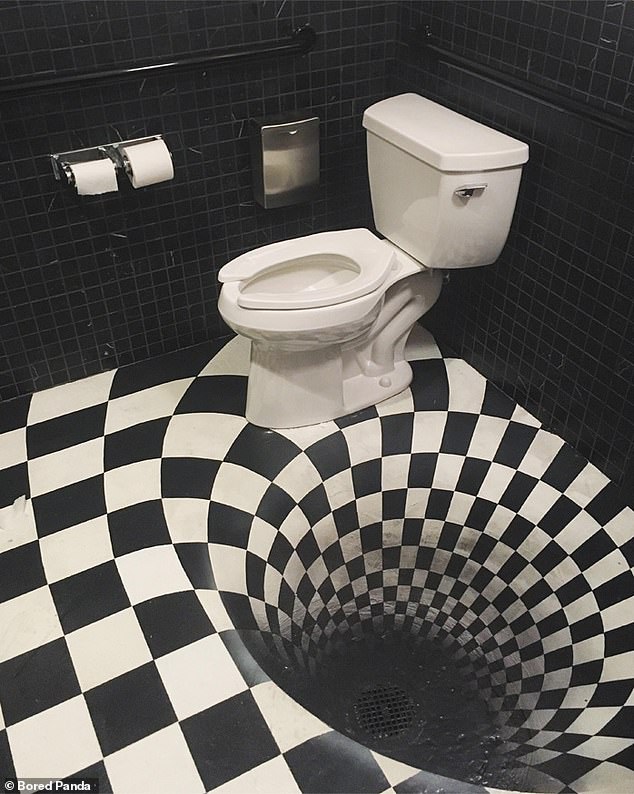 That’s a long way down! The floor in this bathroom at Chicago Magic Lounge in Chicago, Illinois, creates an optical illusion that makes users feel like they’re falling down a hole 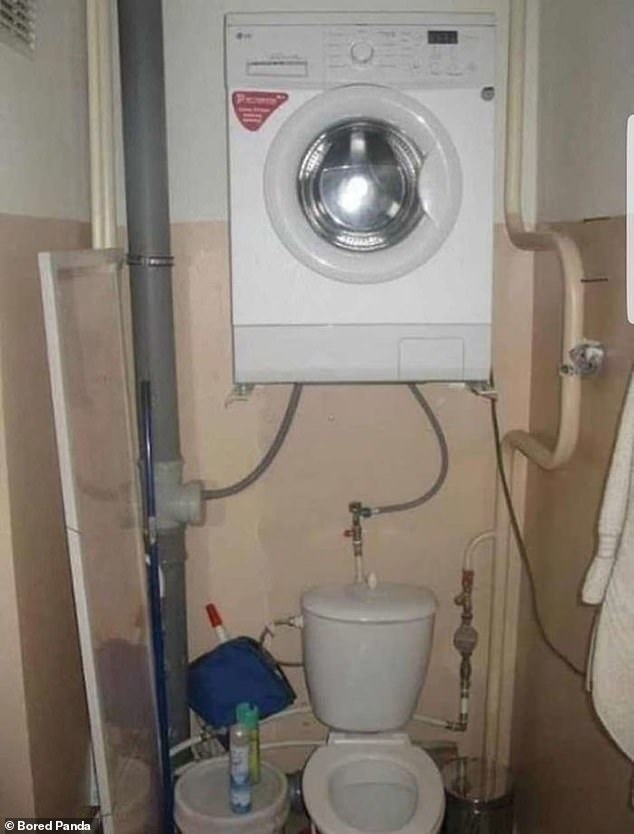 Taking a tumble! This toilet, believed to be in South Carolina, US, will give anyone a fright if they look up and realise a washing machine may fall on their head 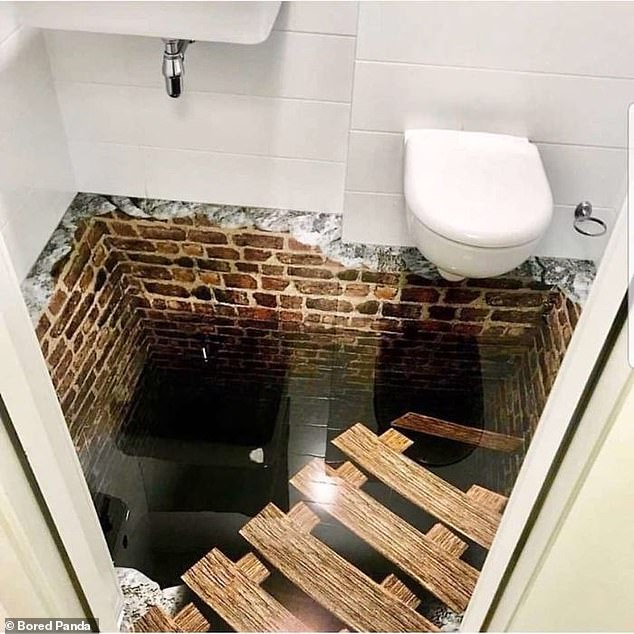 ‘Imagine going here after a drink!’ This ominous looking loo, pictured in an unknown location, features a glass floor and a pit 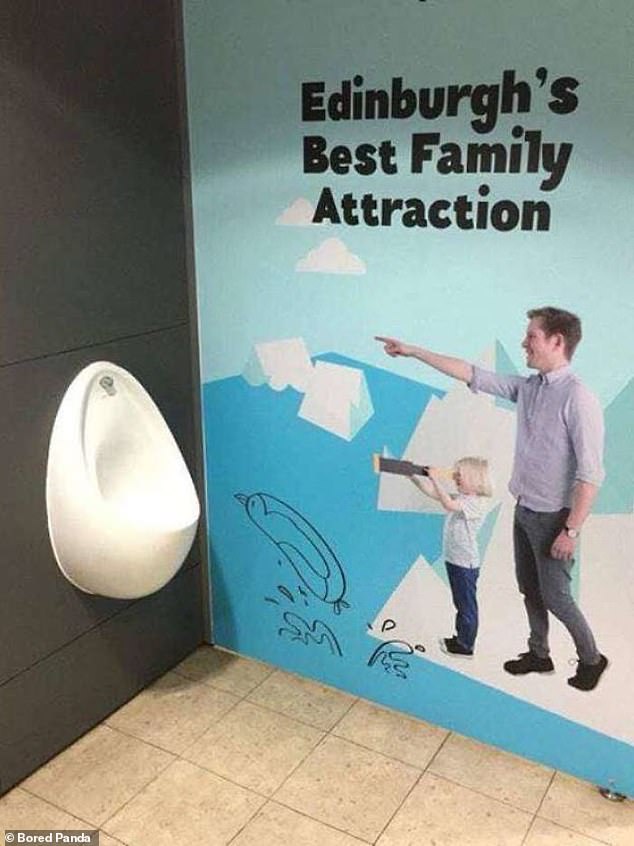 What a dive! Meanwhile, a very public urinal in Edinburgh, Scotland, has amusingly been placed next to a tourist advert 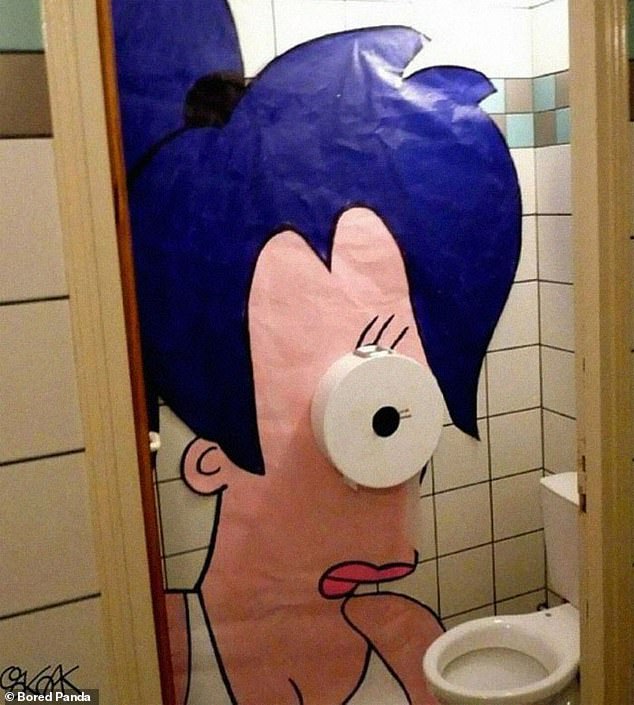 All eyes! This toilet at an office in the US has been decorated to look like Leela, a character from Futurama – but it has a rather scary effect 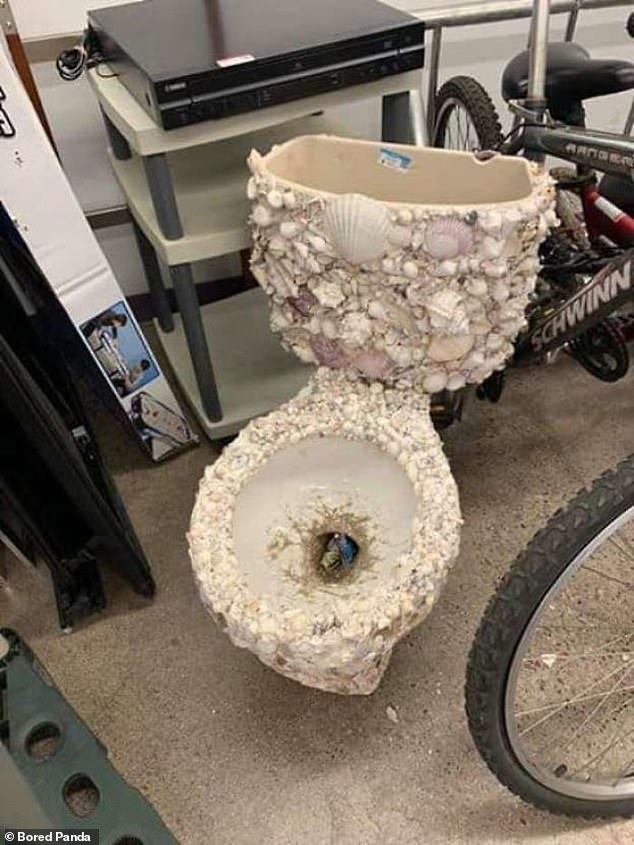 Shell shocked! Facebook users joked this toilet, at an unknown location, looked like it was from Davey Jones’ Captain’s Quarters 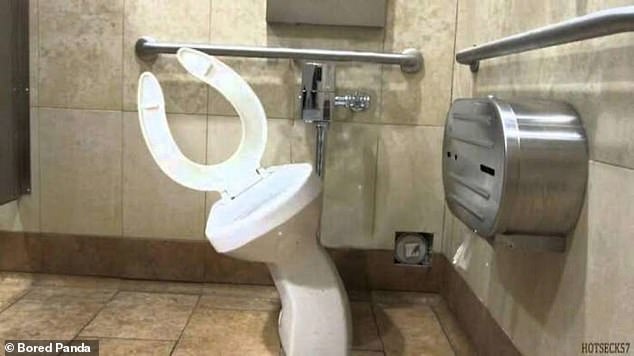 This public toilet, believed to be in the US, requires those who use it to have very good balance and aim 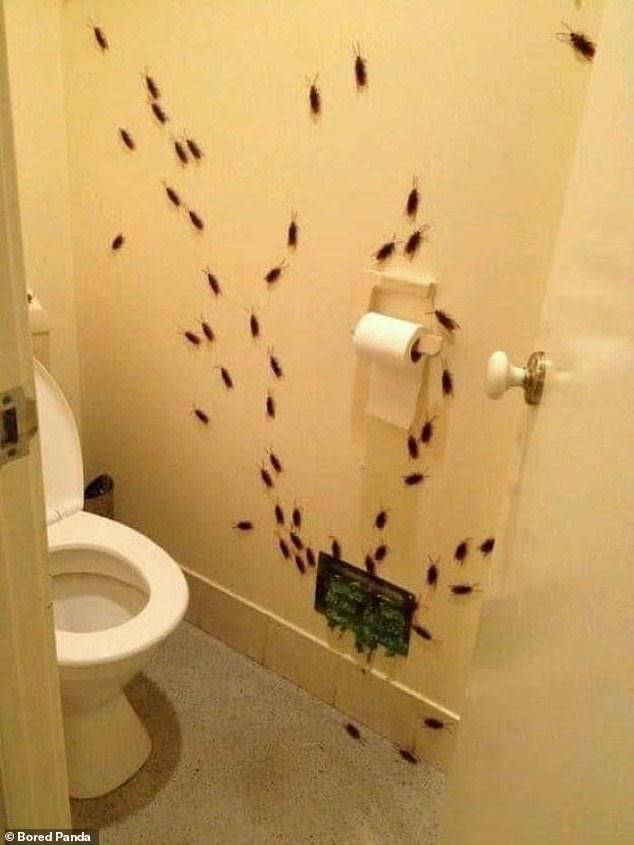 Creeped out! This bathroom is usually pretty innocuous, but it suddenly becomes a lot more threatening when covered in cockroaches 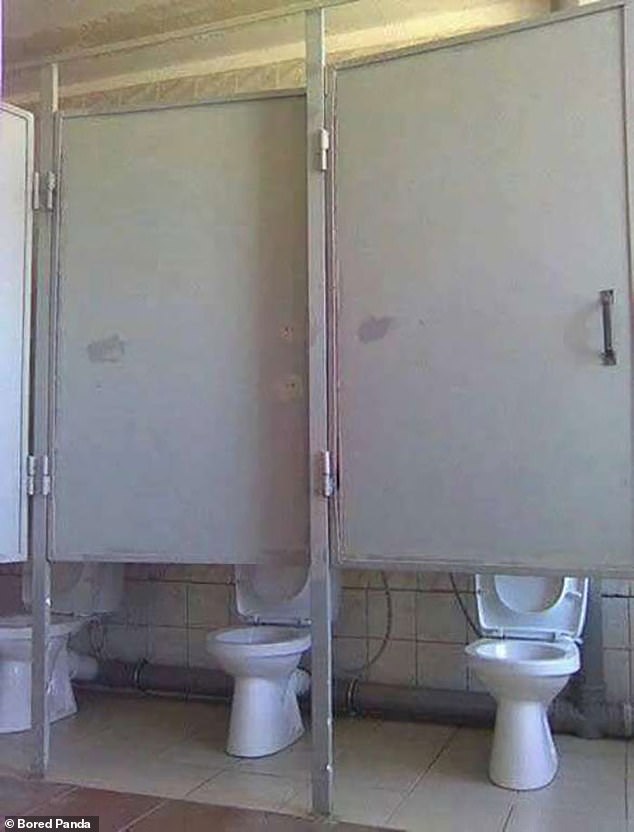 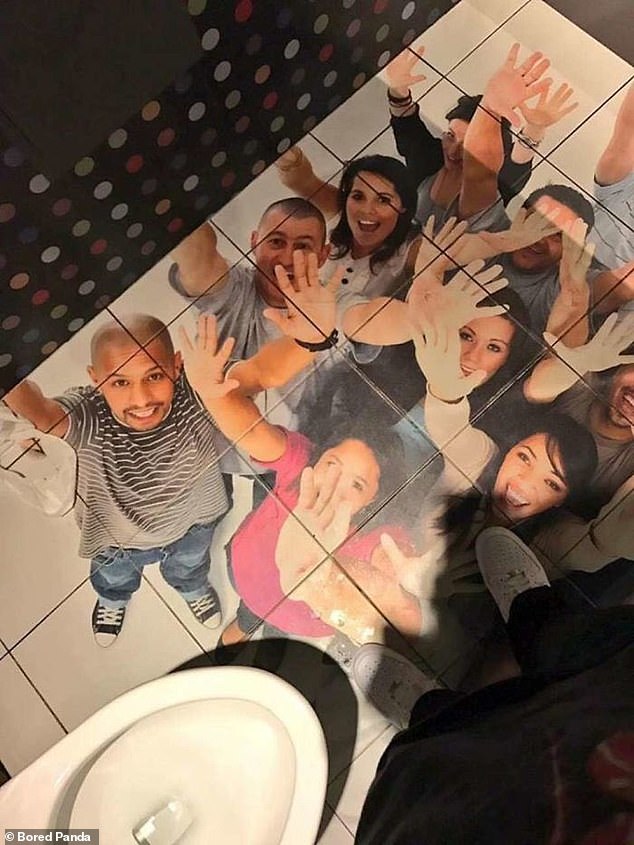 Helping hand! This toilet, at an unknown location, looks as if people are trapped in the floor – and are watching users go to the toilet 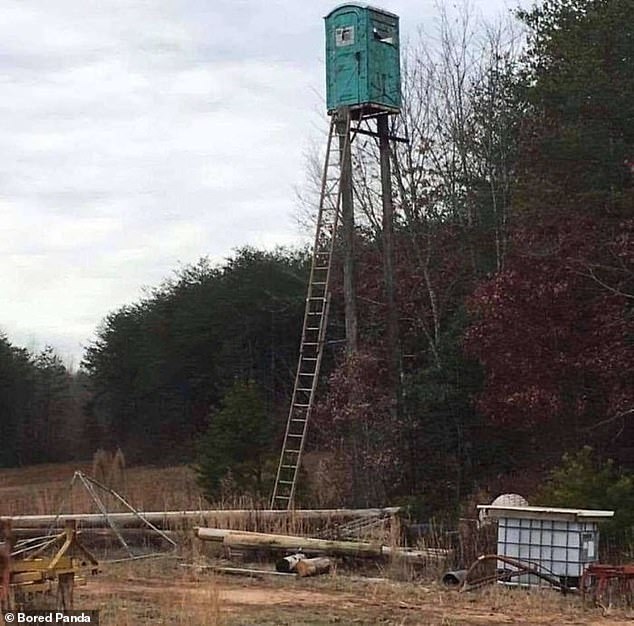 Not for the faint-hearted! This portaloo makes those needing a bathroom break climb a high ladder to relieve themselves 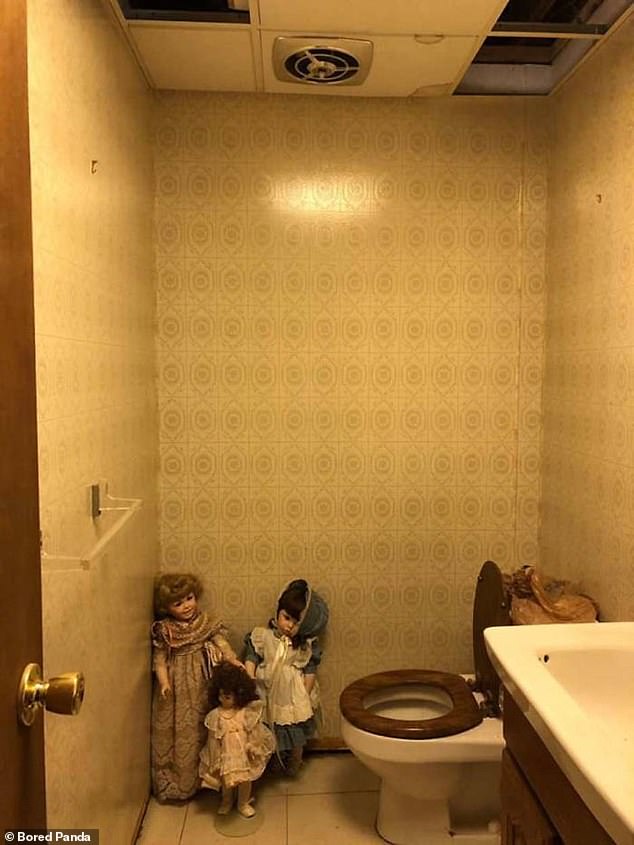 I can see you! Russian dolls stand in the corner of this bathroom, believed to be in Russia, which may be scary to some 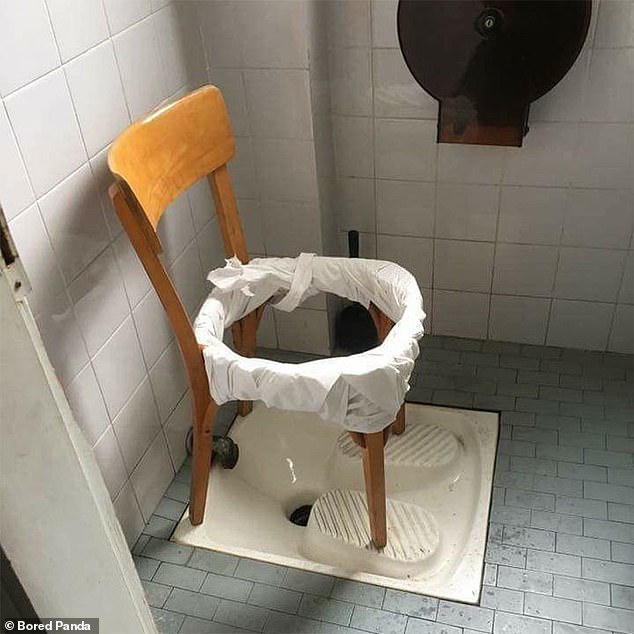 Makeshift madness! This photo suggests someone has used a chair after refusing to use the squat toilet at an unknown location 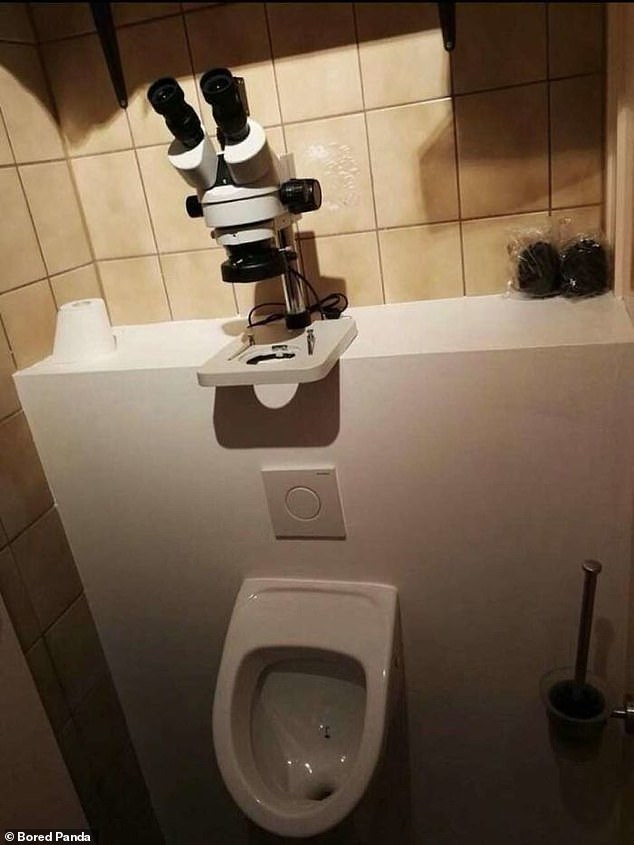 Under the microscope! This urinal is placed next to a microscope, allowing users very close inspection when they need the toilet 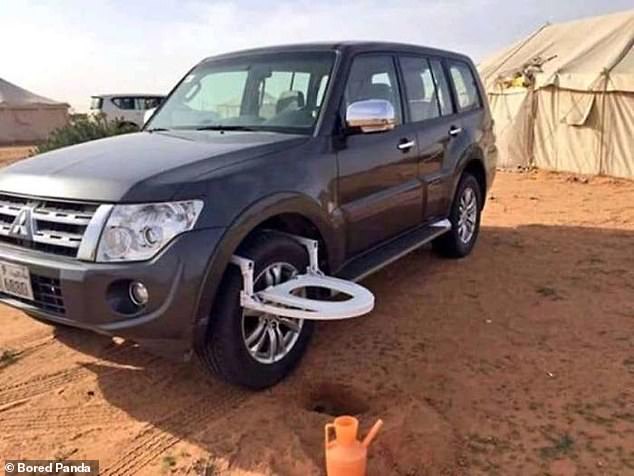 Travel toilet! This portable toilet, believed to be taken in California, shows a camper getting very crafty while in the deser