If you were in two minds about ever walking on a glass-bottomed bridge, this photo might close the argument for you.

The stomach-lurching picture shows a tourist hanging on for dear life after the floor fell out of the one he was crossing.

The incident occurred on May 7, as record-high winds of 93mph whipped around the city of Longjing. 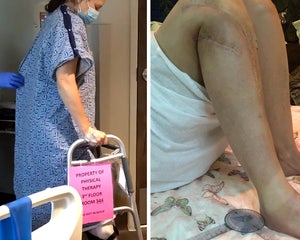 As the tourist was crossing the 330ft high bridge in Piyan Mountain Cultural Tourism Scenic Area, several of the glass panels along the walkway shattered. Pictures posted by state media on Chinese social media site Weibo show the unnamed man clinging to the guardrail, the floor beneath him vanished.

Police and freighters were called to assist, and the man eventually managed to crawl to safety, having spent more than a half hour out there.

The man was taken to hospital but did not suffer any physical injuries, however he was given psychological counseling.

Ferris Wheel Operator Attacks Mom Getting Off With Kids, Gets Beaten Up by Crowd

According to CNN, the entire Piyan Mountain Scenic Area was closed pending a comprehensive safety inspection.

Glass-bottomed bridges are a popular tourist attraction in China; the largest one in the world — measuring 1,725ft long — spans Qingyuan in Guangdong.

In August, one tourist died and six were injured while using a 3,230-foot-long glass slide in Benxi, when sudden heavy rainfall made it too slippery, causing several people to collide with each other.