‘John’s had a rough few months alone!’ Twitter is left in stitches over video of a Disney World robot going haywire during a ‘dress rehearsal’ – as users remix the bizarre clip to funny songs

As much of the world emerges from lockdown amid the coronavirus pandemic, it is taking some time for things to return to normal – and it seems even the most magical place on earth is suffering from a bit of post-quarantine fatigue.

A hilarious viral video taken at Walt Disney World in Florida shows one of the park’s attractions breaking down in a very entertaining fashion during a ‘dress rehearsal’ staged ahead of the popular site’s reopening.

The clip, which was shared on Twitter, captures a robotic character from the popular audio-animatronic stage show Tomorrowland’s Carousel of Progress, shows the main robotic character, John, stuck on a loop, making it look as though he is dancing energetically to a dynamic beat. 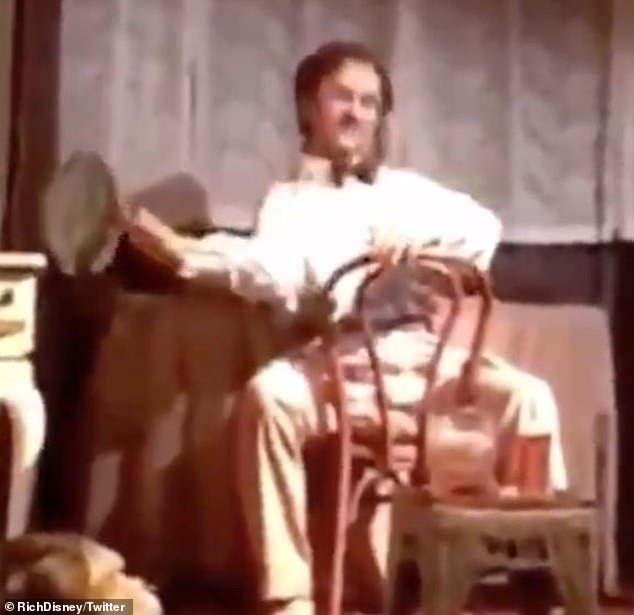 Meltdown: Twitter users have gone wild over a hilarious video of a malfunctioning robotic character at Disney World 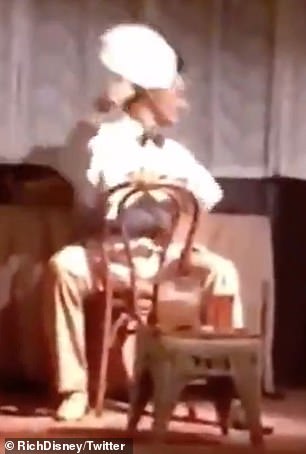 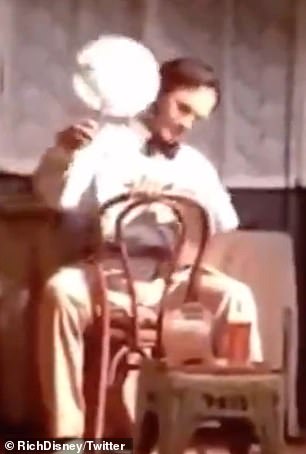 Oh dear: The animatronic character, from Tomorrowland’s Carousel of Progress, was caught on camera stuck on an awkward loop during a dress rehearsal ahead of Disney’s reopening

Amusing: Twitter users quickly began remixing the video with different music, making it look as though the character, John, was dancing

And while the clip was initially shared without music, it wasn’t long before Twitter had changed that, remixing the video to a variety of different songs to make it look as though John was indeed rocking out like nobody was watching.

The resulting music videos left other users in hysterics – prompting many to point out that John looks as frazzled as the majority of the world after spending months inside amid the pandemic.

‘John clearly hasn’t been rehearsing during his vacation time,’ Disney-focused account The Magic Blitz joked, while sharing the original clip – which sparked a slew of hilarious edits.

‘John has had a really rough few months alone, trapped inside Carousel of Progress…’ another user responded while adding an EDM hit to the video.

From there, users went wild with their choice of music – with one person using the song Guns and Ships from the musical Hamilton, while many others opted to edit in tunes that have been made popular on the app TikTok, usually because teens on the app perform viral dances to them.

But in place of young social media users showing off their moves, Disney robot John can now be seen shaking his groove thing to the sounds of GOOBA by 6ix9ine, an acoustic version of Come Get Her by Rae Sremmurd, and Go, Go, Go Who’s Next by Hip Hop Harry.

One person even found a heavy metal version of Supercalifragilisticexpialidocious from classic Disney movie Mary Poppins and remixed that over the video, making it look as though John was headbanging to the ferocious tune.

The edited videos have provided much entertainment on both TikTok and Twitter, with users admitting that the viral clips have ‘made their day’.

‘My face literally hurt from laughing at this,’ one person said, while another said of the robotic character: ‘He’s drunk!’

Someone posting under the username John from Carousel of Progress, then chimed in to defend the character, saying: ‘I’d like to see you stuck in a quarantine with Orville….’

The viral video trend comes just days ahead of Disney’s big reopening – which park staff have been preparing for with a series of test runs and dress rehearsals, a necessary step if the original clip is anything to go by.

The Magic Kingdom and Animal Kingdom are currently set to reopen on Saturday – despite Florida seeing a huge spike in the number of coronavirus cases over the past few weeks.

Disney has implemented a host of new measures in order to ensure the health and safety of its guests, including the ability to unlock hotel rooms with an app, sanitizer and hand-washing stations placed throughout the parks, and partitions between guests on rides.

Guests can expect to be faced with a new experience from the moment they arrive at the ‘Most Magical Place on Earth’, according to Good Morning America which went on a behind-the-scenes tour this week.

Disney hotels have switched to mobile check-in, meaning visitors are given their room number via a smartphone app, limiting all contact with hotel staff.

To lock and unlock the door to their rooms, it’s as easy as simply pushing a button on the app. 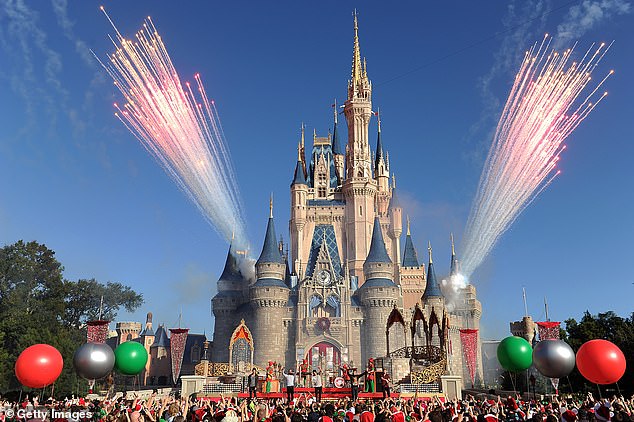 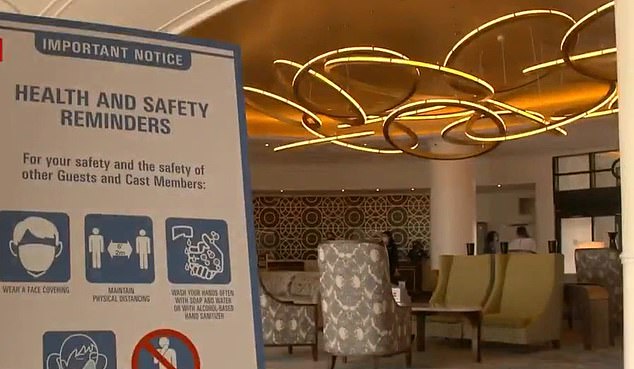 Magic Kingdom and Animal Kingdom will reopen Saturday with new measures including being able to unlock hotel rooms with an app, sanitizer and hand-washing stations everywhere and partitions between guests on rides 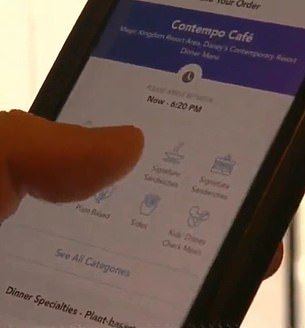 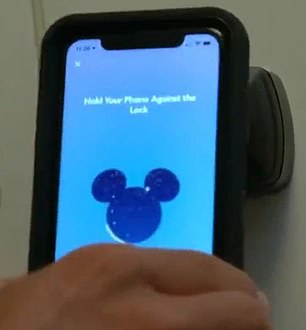 Disney hotels have switched to mobile check-in, meaning visitors are given their room number via a smartphone app, limiting all contact with hotel staff. Then to lock and unlock the door to their rooms, it’s as easy as simply pushing a button on the app (pictured)

Inside the theme parks, visitors will then be greeted with temperature checks at the entrances, there will be reduced capacity throughout and it is mandatory for all guests and staff to wear face masks.

Sanitizer and hand-washing stations have been installed throughout the parks, social distancing signs are set up to remind people to keep their distance, and, when guests fancy a bite to eat, they can place mobile orders at the park restaurants.

The rides themselves have also been adapted to enable guests to enjoy the popular attractions safely.

At Kilimanjaro Safari, the popular safari attraction at Disney’s Animal Kingdom, guests will enter the ride through partitions and there are barriers between each row on the ride vehicle in order to reduce contact with other guests, GMA reported.

The Avatar Flight of Passage, which is one of the park’s most popular attractions, can also be seen to be adapted with social distancing measures and sanitizer stations throughout.

Parades and nighttime spectaculars, which usually draw in large crowds making social distancing a challenge, will not be returning.

Character meet and greets will also not be available but Disney said characters will still be present to ‘delight guests’ in new ways including at character breakfasts.

Jim MacPhee, SVP operations at Walt Disney World Resort told GMA that the phased reopening plan was ‘methodical’ and could be adjusted if necessary to ensure visitors and workers are protected as best as possible.