They were the queens of Sydney’s underworld. Tilly Devine and Kate Leigh dominated Sydney’s organised crime in the early decades of last century.

They’re a compelling pair in the annals of criminal history – two rival female crime bosses at a time when men ran pretty much everything.

This musical is the latest iteration of their story that has been told in books, a television series (Underbelly: Razor), even an augmented reality adventure.

It’s a measure of the broad appeal of these women that this show has been created by US-based composer Andy Peterson and lyricist Kate Mulley, who premiered it last year in New Jersey.

Getting its first Australian outing on turf not far from where the two crims plied their violent trade, this dark two-hander views the women from a contemporary perspective: “We didn’t have screens, we had syphilis.’’ Such a line flags from the outset that this will not be a sentimentalised or sanitised spin on their lives or milieu. 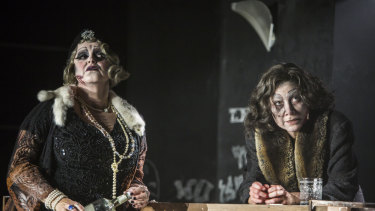 In this production, the two women are ghosts, haunting their old domains, feuding with each other and fighting for their legacy. Demonised in sensationalist press reports, they resolve to tell their own more complex stories.

From dirt-poor backgrounds, British-born Tilly, a teen prostitute, and Dubbo-born, neglected Kate both sniffed opportunity. Tilly saw a loophole that prohibited men from owning brothels to run a string of her own. Kate took advantage of the lock-out laws of an earlier age – 6pm closing – to sell sly grog as well as cocaine and stolen goods.

The piece quickly establishes their different characters. Bleached blonde Tilly, in pearls and furs, has a low-rent flamboyance. Kate makes no such concessions to grooming or the male gaze. Grimy and dishevelled, she seems to reek of Darlinghurst’s squalid streets.

Kate despises Tilly for selling herself, scorns her pretensions in moving to Maroubra while Kate has stayed among “her people”.

Yet the piece takes a while to get going, as it mires early on in claim and counter claim about the other.

The introduction of Lilian Armfield, Australia’s first female detective – tasked with bring the pair to book – is something of a circuit breaker and injects an outsider’s perspective.

The lyrics – coarse and in-your-face at times – are stronger than the music, the latter delivered with fine timing by pianist and musical director Lucy Bermingham, on stage throughout.

Tilly gets the showstopper tune, as she sings of the violent husband who attempts to kill her (he is acquitted because she refuses to testify), while Kate’s ironic The Worst Woman in Sydney is the show’s most hummable number.

Amelia Cormack and Debora Krizak are well matched as Tilly and Kate in this smart production by Benita de Wit, in which each dominates one half of the stage. Vocally, Cormack has a brightness that contrasts with Krizak’s mellow tone.

Each plays several minor roles in this two-hander. Cormack segues seamlessly into Armfield with just a change in accent. Krizak brings depth to Kate, grief-stricken over her wayward daughter Eileen and deliciously self-serving when arguing her case for the good she’s done. St Kate.

Isabel Hudson’s is a dark, film noir-style set, with alcoves and wooden crates that evoke a dank underworld of perpetual night. Her monochrome costumes extend the sense that these are hard-scrabble lives from which all colour has been leeched.

By the end there’s a hint that these vicious, violent rivals could almost be frenemies as they acknowledge that no one wants a 60-year-old-prostitute or to buy booze and cocaine from a septuagenarian.

The one enemy they can’t defeat is the one who comes with a scythe not a razor.