A coalition of unions representing workers along Australia's food supply chain have called on the government to scrap the national backpacker fruit-picking program and improve working conditions to attract unemployed Australians.

The unions argue too many backpackers are underpaid under the Working Holiday Maker visa program, which allows travellers to extend their stay in Australia if they spend some time working certain jobs in regional areas, and with regional unemployment forecast to hit more than 9 per cent, the unions say the jobs should go to locals. 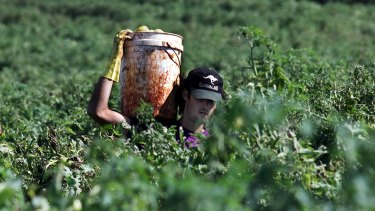 About 115,000 backpackers were on the Working Holiday Maker visa program last year, comprising up to 80 per cent of the workforce for some harvests, according to the Fresh Produce Alliance. A large-scale 2018 report by the Fair Work Ombudsman found more than half the businesses audited were not complying with workplace laws and about 30 per cent had underpaid their workers.

With borders closed, the Retail Supply Chain Alliance – made up of the Australian Workers Union, Transport Workers Union and retail union SDA – sees an opportunity for a reset.

The AWU blamed the level of underpayments on layers of labour hire contracts that obscure who really sets workers pay.

In a submission to the government's National Agricultural Labour Advisory Committee, the unions suggest labour hire firms should need national accreditation and be subject to union audits.

They say any international workers should come via the Seasonal Workers Program, which recruits workers from Pacific countries, and be given a pathway to citizenship.

He said the party should "strongly consider taking to the next election" a plan to cut the Working Holiday Maker visa and instead increase Australia's intake of workers from Pacific nations.

Agriculture Minister David Littleproud rejected the unions' call to end the program and said the government was working with the states to prevent worker exploitation. "It's very easy for the union movement to have this righteous philosophical view but the practical reality is that farmers can't live in hope that someone will turn up to harvest their crops," Mr Littleproud said.

The National Farmers Federation argues the brief nature of harvest work means most Australians, tied down by housing, family and social connections cannot follow it around the country. The organisation wants backpackers' visas extended and is pushing for a dedicated agricultural visa too.

Labor's home affairs spokeswoman Kristina Kenneally in May sparked a political firestorm by calling for Australians to have “first go” at jobs post pandemic.

A spokesman for Senator Kenneally did not directly comment on the union's proposal but said the government should fix problems of labour shortages and exploitation in the horticultural industry.