Dangerous and even deadly overcrowding is plaguing Mount Everest. The death toll on the world’s highest mountain has climbed to 11 already this year — the most since 2015. Jim Davidson, a veteran high-altitude mountain climber and expedition leader who has twice reached the peak of Everest, sat down with “CBS This Morning” to talk about what it’s like to scale the world’s tallest mountain and explain the factors that have led to the rising death toll.

“It’s been an especially bad year,” Davidson said Wednesday. “We’ve had some bad weather, so the days that people could go to the summit got all compressed. It was a bigger crowd than average and maybe some people weren’t fully trained. You stack all of those together and it turns out to be a really bad factor.”

Another factor leading to overcrowding is the way the government of Nepal issues permits for climbers. This year, 381 permits have been issued for 44 teams. “The government does issue permits, but there seems to be no limit to the number of permits that are issued,” Davidson said. “I think that they should restrict it some, especially based on experience. It’s hard to set an exact number, but if you keep letting more people come it’s going to get worse every year.”

It is $11,000 to get a permit card and then there is the additional cost with time and equipment. Davidson estimates the total cost is closer to $45,000.

“It takes a lot of your personal time to get ready, and it’s tough on the family too,” he said.

Recently released pictures have shown long lines of climbers waiting to reach the summit, biding their time in an area of extreme conditions and low oxygen known as the “death zone.” 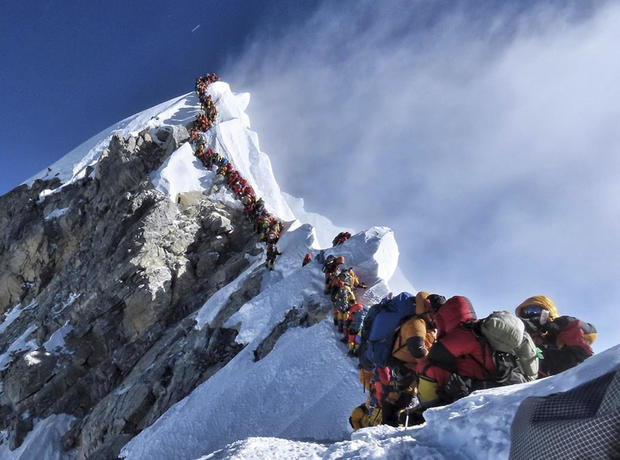 “We’re up in the ‘death zone’ at 26,000 feet, so even on bottled oxygen, you’re slowly dying,” Davidson recounted. “You can feel your energy draining out of your legs and out of your core, and you get disassociated in your mind. It gets very difficult to be up there, just to exist.”

“When we pass each other, one of us has to unclip from the line in order to get by each other,” he said. “Trying to cooperate, but you don’t speak the same language, you’re wearing a mask, it’s difficult to talk, so there’s constant exposure to danger.”