Scott Morrison needs a surge of approval that can propel him back into the election race when he and his government are dangerously becalmed. But all the Prime Minister has gained from his big-spending budget is the mere whiff of a gentle breeze.

Voters like the budget, but they do not like it enough to change their opinion about Morrison and certainly not enough to swing back to the Coalition after a steady shift toward Labor and its leader, Anthony Albanese. 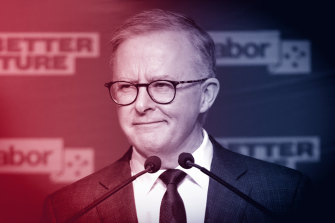 Anthony Albanese has tapped into a vehement protest vote against Scott Morrison in parts of the electorate.

Former prime minister John Howard and his treasurer Peter Costello witnessed a bounce in 1999 and again in 2000, but there have been very few since then in the published opinion polls.

What matters for Morrison, however, is that he knows how to campaign, and win, on a budget agenda even when the polls tell him to give up.

The reception to the federal budget in April 2019 was fairly lukewarm, even after Treasurer Josh Frydenberg unveiled $158 billion in tax cuts, but the government set up a contrast on tax and edged ahead of Labor in just seven weeks.

You might call that a bounce. Morrison has done it before and may do it again.

The problem? The primary vote results in Tuesday’s Resolve Political Monitor mean there is a commanding lead for Labor after preferences. In fact, Resolve director Jim Reed says all the recent polls show a two-party result of about 54 or 55 per cent for Labor regardless of their different polling methods.

In theory, Morrison is history. In fact, he is still in the race. He won last time when the post-budget survey for The Sydney Morning Herald and The Age at exactly the same point in the election cycle showed Labor had a two-party lead of 53 per cent.

The Labor lead turned out to be soft three years ago. It melted in the heat of the campaign. That’s why it matters when Reed describes the Labor support as “wide but shallow” today. About one in every five voters is yet to commit to either side.

Albanese has tapped into a vehement protest vote against Morrison in parts of the electorate and he knows the axiom that oppositions do not win elections, governments lose them. Even so, he needs to cement the support revealed in this survey by mounting a compelling campaign that gives Australians something to vote for, not just against.

Morrison is more vulnerable this time on key personal measures because the past three years have taken their toll on his standing. When voters were asked to rate his performance in the April 2019 Ipsos poll, the net result was positive by nine points. The net result in Tuesday’s Resolve poll is negative by 14 points.

When voters were asked to name their preferred prime minister in the 2019 poll, they backed Morrison by 46 to 35 per cent against Bill Shorten, the Labor leader at the time. Now they prefer Albanese, even if by only 37 to 36 per cent. This measure is no predictor of an election outcome but it shows that Albanese is competitive.

This compares results from different polling companies but is a way of measuring the government’s challenge.

The Resolve survey has a margin of error of 2.5 percentage points and is based on online surveys with 1618 people from Wednesday to Sunday. It only asked questions of people enrolled to vote. The questions were randomised to avoid a donkey vote. The primary vote options were presented to voters in the same way as a ballot paper, with no way for them to tick a box saying they were undecided.

This can sometimes explain why the Resolve survey shows greater support for independents and others. Newspoll, by contrast, excluded an “uncommitted” group of 6 per cent from its final tables this week. A new survey in The Australian Financial Review on Monday, conducted by Ipsos, found 7 per cent of voters said “don’t know” when asked about their primary vote.

The methods are different but the overall message is the same.

Albanese has victory within his grasp.

Even so, Morrison used the budget in 2019 to fund seat-by-seat giveaways during a campaign that was quick and cunning. The budget put about $5 billion aside in various programs for car parks, sports facilities and so on. Morrison swept into electorates where Labor thought it was safe.

This time, Morrison has budget programs of about $13.8 billion to spend on these sorts of promises. He has already begun with the pledge of a new port for Darwin. The Coalition campaign in Queensland will be relentless.

The national results cannot predict how this intense local campaign will play out.