The adorable moment a baby boy said his first word was captured on a video that has since gone viral.

Andrea Nagel, from Kansas, recorded her eight-week-old baby August as he lay on a play mat looking happy and relaxed. In the ten-second clip, which was shared on YouTube on Sunday, June 9, Andrea is heard asking the baby to say hello to his aunt Lauren.

And much to the 32-year-old mother’s surprise, the baby is heard saying ‘hello’ toward the end of the video, leaving Andrea gasping in shock and delight. 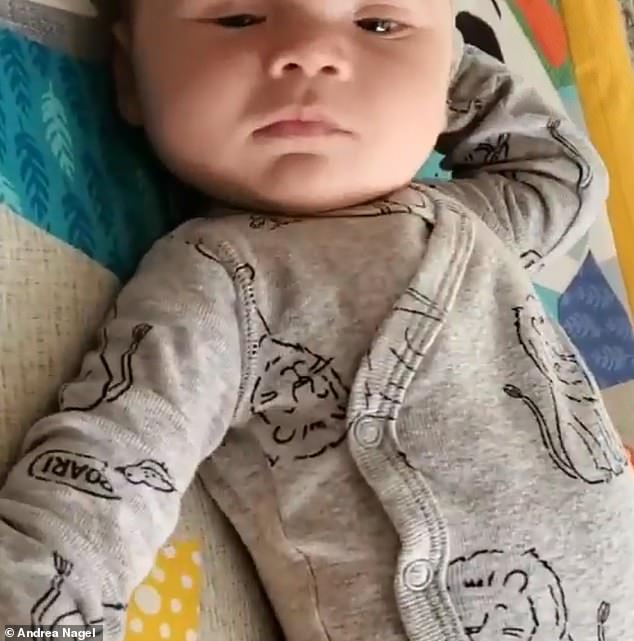 Adorable! Andrea Nagel, 32, from Kansas, captured the moment her son, August (pictured), said his first word in a video she shared to YouTube 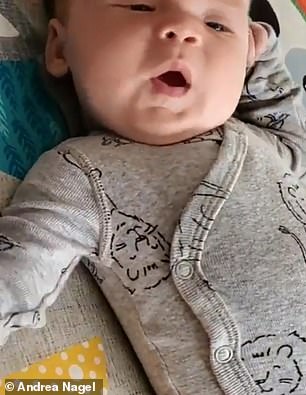 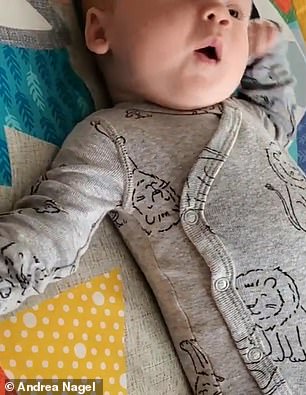 Cute! The clip sees the eight-week-old baby lying on a play mat while his mother talked to him and tried to encourage him to say hello to his aunt Lauren in the video 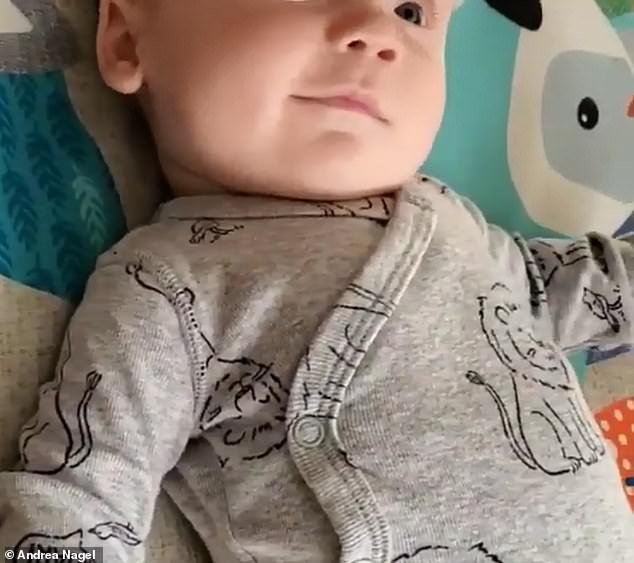 Sweet: Much to Andrea’s delight, the baby eventually utters his first ever word, ‘hello’, toward the end of the clip, leaving her in shock

The ten-second clip, which has garnered over 5,000 views, begins with Andrea holding the camera over the child, as she said: ‘Should we say hi to aunt Lauren?’

‘Hi aunt Lauren,’ she added, eager to get the child to repeat her own words. 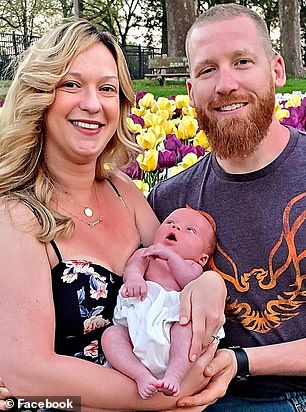 Viral: Since Andrea (L), pictured with her partner (R) and August, shared the video, it has gone viral

Meanwhile, the adorable baby boy lay in what looks like his a play mat as he moved his arms around and looked around the room.

‘Hello,’ Andrea, who seemed determined to get the baby to repeat her words, said.

And much to Andrea’s delight, just a few seconds later the little boy uttered the word ‘hello’, leaving her in shock.

Andrea was heard gasping in shock before once again saying ‘hi’ to the little boy.

And shortly after August was heard uttering his first word, he went on to impress his mother even more.

In a video shared to YouTube the same day, the little boy was filmed uttering his first ever sentence to his mother.

The clip, which has garnered more than 4,000 views on YouTube, shows August lying in a play gym.

At the beginning of the video, Andrea is heard saying: ‘Hello.’

While the baby plays and smiles on the play mat, he can be heard muttering words and making different noises.

‘Hello,’ Andrea said once again, eager to get the child to repeat her words once again.

Just a few seconds later, the eight-week-old baby said: ‘How are you?’

Andrea, who once again gasped in shock, seemed delighted with her baby boy. ‘I’m good, how are you?’ she said.

Meanwhile, August returned to looking up at the toys hanging above him on his play mat.

According to Baby Center, babies tend to make sounds in the first month or two after they are born.

However, they tend to only begin forming proper words after around six months.

The parenting website adds that babies typically begin to form two to four-word sentences between 18 months and two years of age.

Parents Magazine reports that there are some techniques that can be used to encourage your child’s first words, including simply engaging in conversations with them, and pausing after saying a word so they have time to process the word.