Natural disasters force 100 million people a year to seek aid and that number is expected to double within 30 years as climate change intensifies floods, droughts and storms.

Releasing the report on Tuesday, International Federation of Red Cross and Red Crescent Societies secretary-general Jagan Chapagain called on the international community to reduce greenhouse gas emissions and fund infrastructure and services to mitigate the impact of global warming, starting with the most vulnerable communities.

"Climate and weather-related disasters are causing massive humanitarian impacts across the world, directly affecting 1.7 billion people in the past decade alone," he said.

"Even though we are winning small victories every day, in the big picture, we are not winning at all. We – as a global community – are not on track to make the changes that need to be made and to make them in time."

Weather and climate-related disasters have killed more than 410,000 people in the past 10 years, the vast majority in low and lower-middle-income countries, according to the Red Cross, with heatwaves the biggest killer, followed by storms.

Last year, nearly 24 million people were displaced due to weather-related events, largely floods and storms. Bushfires affected more than 14,000 people around the world and more than half were in Australia.

Locally, an estimated 9500 people were affected by the Black Summer fires, which scientists say were intensified by climate change, with 34 deaths, 3000 homes lost and health costs of $2 billion, according to the recent natural disasters royal commission.

The commission found extreme weather had already become more frequent and intense because of climate change, and further global warming over the next 20 to 30 years was "inevitable".

The World Bank in 2018 forecast that unchecked global warming, with no further emissions reductions, would create droughts, floods and storms that would drive an estimated 140 million to internal migration across Sub-Saharan Africa, South Asia and Latin America. 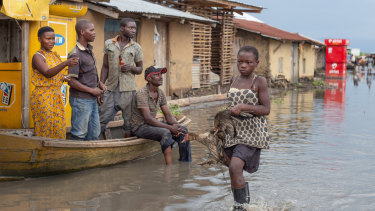 In May, Western Uganda was hit by flash floods when heavy rain caused major rivers to burst their banks. Credit:Uganda Red Cross Society

Australian Red Cross international director Michael Annear said poorer communities around the world were most exposed to climate risks and should be the "first priority" for assistance.

In May, Africa was hit by a "triple disaster", with flooding, a locust plague and coronavirus stretching community coping mechanisms and disaster management capacities in Ethiopia, Kenya, Rwanda, Somalia, South Sudan, Tanzania and Uganda, the Red Cross said.

That same month, India sweltered in 50 degree heatwaves and Cyclone Ampham hit India and Bangladesh, where 3 million people were evacuated, more than 100 killed and thousands of houses damaged or destroyed across the two countries.

Red Cross climate change director Maarten Van Aalst said the data used by Red Cross to compile its report was "part of a best-practice collection of disaster information" including from the international Emergency Events Database, the World Bank and the United Nations Intergovernmental Panel on Climate Change, where he is a lead author.